In Memory of the Brave Soldiers of the Continental Army 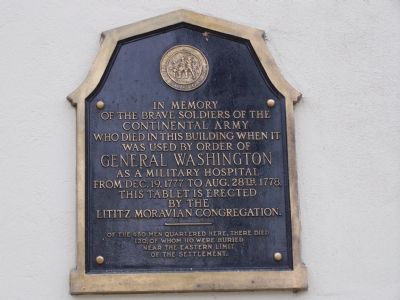 who died in this building when it was used by order of General Washington as a military hospital from Dec. 19, 1777 to Aug. 28, 1778. This tablet is erected by the Lititz Moravian Congregation
of the 450 men quartered here, there died 120, of whom 110 were buried near the eastern limit of the settlement.

Topics and series. This historical marker is listed in these topic lists: Cemeteries & Burial Sites • Churches & Religion • Science & Medicine • War, US Revolutionary. In addition, it is included in the Former U.S. Presidents: #01 George Washington series list. A significant historical month for this entry is August 1778.

Location. 40° 9.356′ N, 76° 18.165′ W. Marker is in Lititz, Pennsylvania, in Lancaster County. Marker can be reached from the intersection of E. Main Street and S. Water St., on the right when traveling east. Touch for map. Marker is in this post office area: Lititz PA 17543, United States of America. Touch for directions. 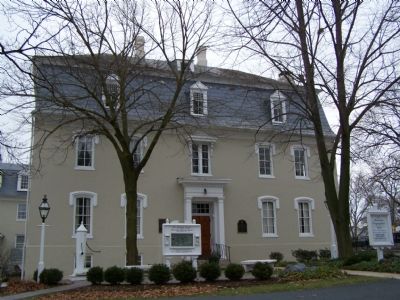