Propeller of the SS Highflyer 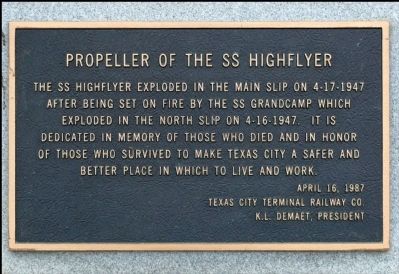 By Jim Evans, February 9, 2012
1. Propeller of the SS Highflyer Marker
Inscription.
Propeller of the SS Highflyer. . The SS Highflyer exploded in the Main Slip on 4-17-1947 after being set on fire by the SS Grandcamp which exploded in the North Slip on 4-16-1947. It is dedicated in memory of those who died and in honor of those who survived to make Texas City a safer and better place in which to live and work. . . April 16, 1987 . Texas City Terminal Railway Co. . K.L. Demaet, President . This historical marker was erected in 1987 by Texas City Terminal Railway Company. It is in Texas City in Galveston County Texas

Location. 29° 22.532′ N, 94° 54.267′ W. Marker is in Texas City, Texas, in Galveston County. Marker can be reached from the intersection of Texas City Port Boulevard (Loop State Highway 197) and Dock Road, on the right when traveling north. Located at the entrance to the Port of Texas City. Touch for map. Marker is at or near this postal address: 1301 Loop 197 S, Texas City TX 77590, United States of America. Touch for directions.

Other nearby markers. At least 8 other markers are within 2 miles of this marker, measured as the crow flies. The First Texas City Refinery (here, next to this marker); Texas City Terminal Railway Company 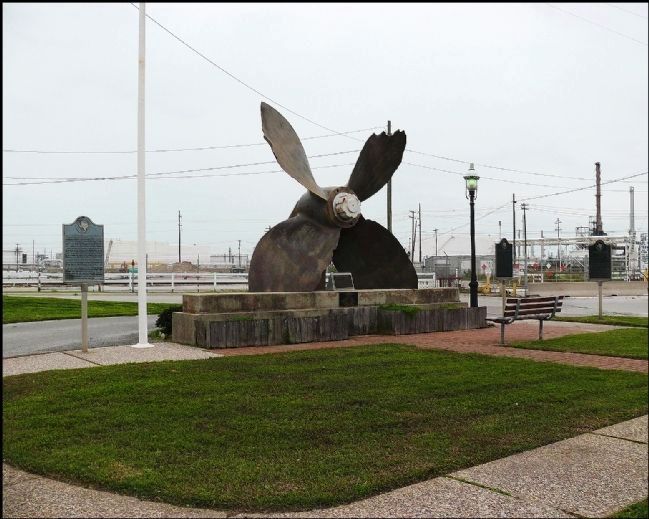