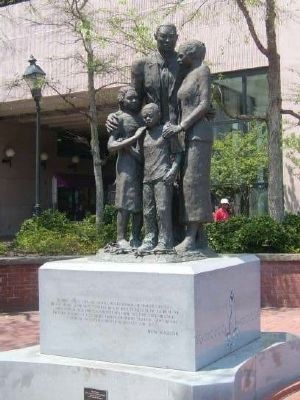 Photographed by Brian Scott, April 21, 2005
1. African American Monument
The monument was designed by Savannah College of Art and Design (SCAD) Professor of Foundation Dorothy Spradley. Spradley was assisted by one of her students, fourth-year SCAD architecture and architectural history student Dan Koster.
Inscription.
African American Monument. . , We were stolen, sold and bought together from the African Continent , We got on the slave ships together, we lay back to belly in the holds of the , slave ships in each others excrement and urine together. Sometimes died , together and our lifeless bodies thrown overboard together. Today we are , standing up together with faith and even some joy. , , Maya Angelou . This monument is in Savannah in Chatham County Georgia

We were stolen, sold and bought together from the African Continent
We got on the slave ships together, we lay back to belly in the holds of the
slave ships in each others excrement and urine together. Sometimes died
together and our lifeless bodies thrown overboard together. Today we are
standing up together with faith and even some joy.
—Maya Angelou

Location. 32° 4.9′ N, 81° 5.464′ W. Marker is in Savannah, Georgia, in Chatham County. Marker is on River Street near Bull Street, on the left when traveling south. On the waterfront. Touch for map. Marker is in this post office area: Savannah GA 31401, United States of America. Touch for directions. 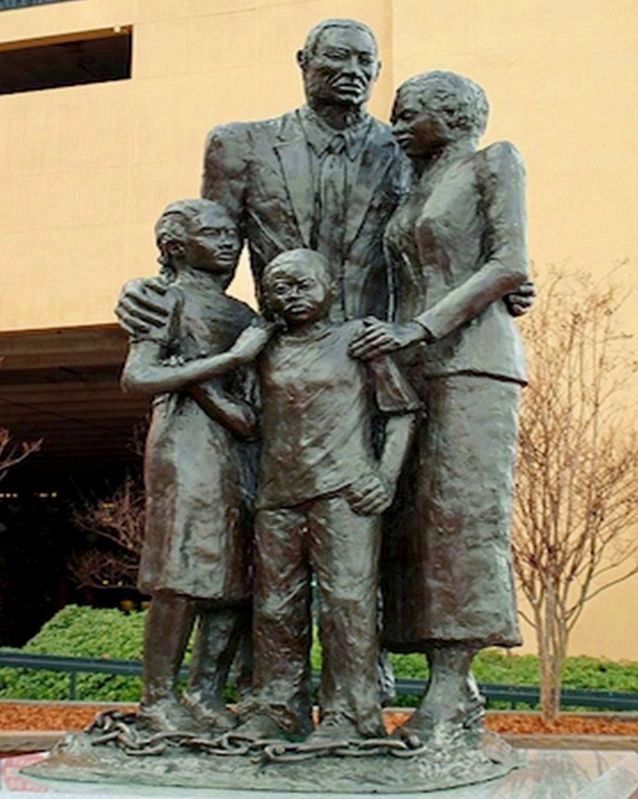 Photographed by John Bloomfield
2. African American Monument
From the Smithsonian Art Inventories Catalog: Nearly ten years in the making, the monument is the first in Savannah to honor African Americans. The idea for the monument came from retired teacher Abigail Jordan, who took her idea to the city government. In 1991 the African-American Monument Association was created to organize the plans for a monument. Jordan contributed nearly $100,000 of her own money to erect the $500,000 statue by Savannah College of Art and Design Professor Dorothy Spradley.

Additional commentary.
1. Middle Passage Monument, 2002
This narrative courtesy of MPCPMP.
Savannah erected a River Street monument on its waterfront commemorating Africans who were removed from their homeland, suffered enslavement, and contributed to the city and region’s development.

Voyages: The Transatlantic Slave Trade Data Base identified 105 ocean ship crossings between 1766 and 1820 that delivered to Savannah 11,453 captive African children, women, and men from Sierra Leone, Gambia, Senegal, Ivory Coast, Ghana, W. Central Africa, Congo, Angola and Guinea Bissau to the city. As the original capital, this is the oldest city 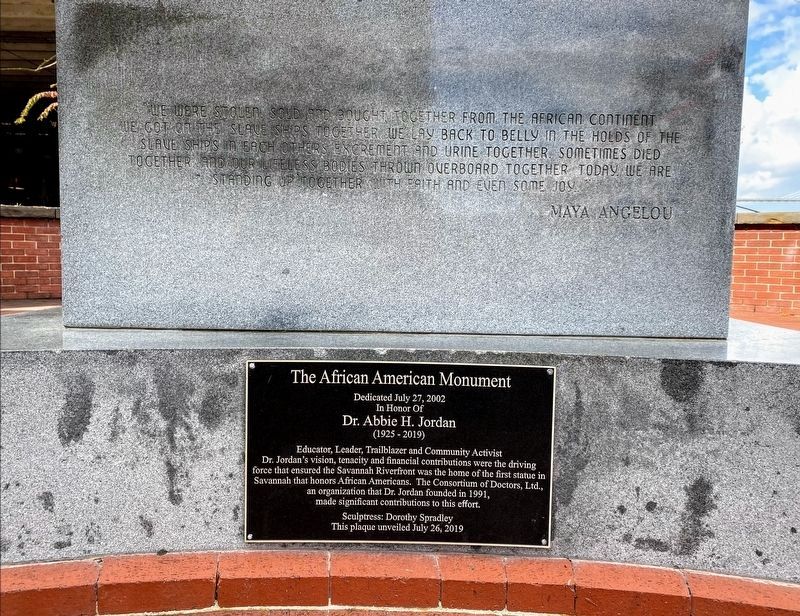 By Shane Oliver, December 30, 2020
3. Tablet below the main inscription on the monument's front
The African American Monument
Dedicated July 27, 2002
In honor of Dr. Abbie H. Jordan
(1925 - 2019)
Educator, Leader, Trailblazer, and Community Activist Dr Jordan's vision, tenacity, and financial contributions were the driving force that ensured the Savannah Riverfront was the home of the first statue in Savannah that honors African Americans. The Consortium of Doctors, Ltd., an organization that Dr. Jordan founded in 1991, made significant contributions to this effort.
Sculptress: Dorothy Spradley
This plaque unveiled July 26, 2019
in the state. Its economy was based upon slavery, rice, and cotton. Located within the Gullah Geechee Cultural Heritage Corridor, Savannah has many sites related to people of African descent:

After his Civil War “March to the Sea,” General William T. Sherman issued Special Field Order No. 15 from the Green-Merldrim House temporarily granting to emancipated families “forty acres and a mule,” from the confiscated properties of Confederate land owners.
— Submitted February 2, 2020, by John Bloomfield of Palm Coast, Florida. 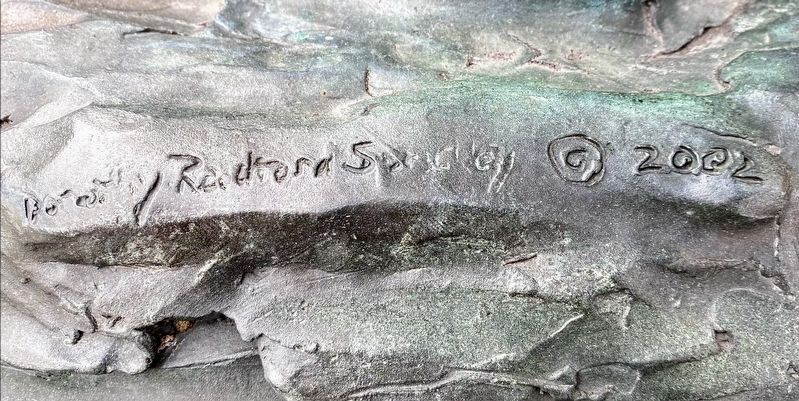 By Shane Oliver, December 30, 2020
4. Sculptor Signature, on the side of the monument with folded hands at the base 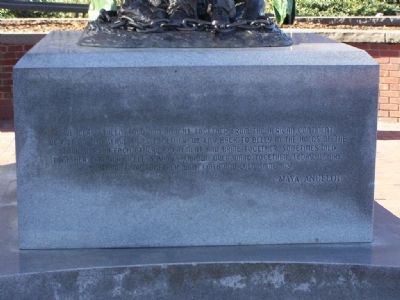 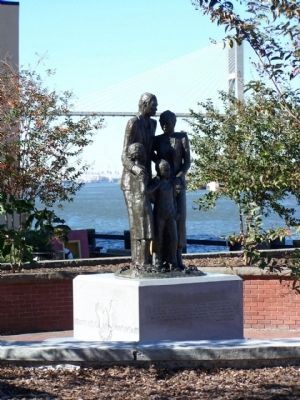 Photographed by Mike Stroud, 2008
6. African American Monument Marker, along The Savannah's River front
From the Smithsonian Arts Inventory Catalog: A family of newly freed slaves (father, mother, son and daughter) stepping out in faith, with broken chains at their feet. The base of the sculpture is carved with chained and praying hands, and is inscribed with a quote by author Maya Angelou. The monument is installed on the cobblestone riverfront where the first slaves arrived in Georgia. 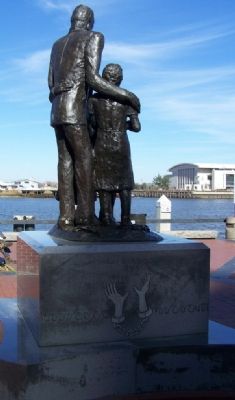 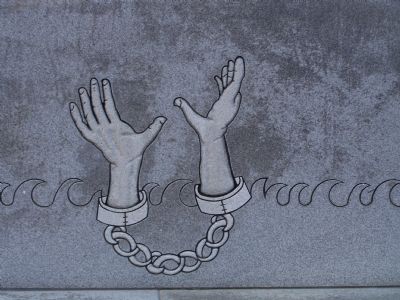 Photographed by Mike Stroud, February 2008
8. Detail on the Monument 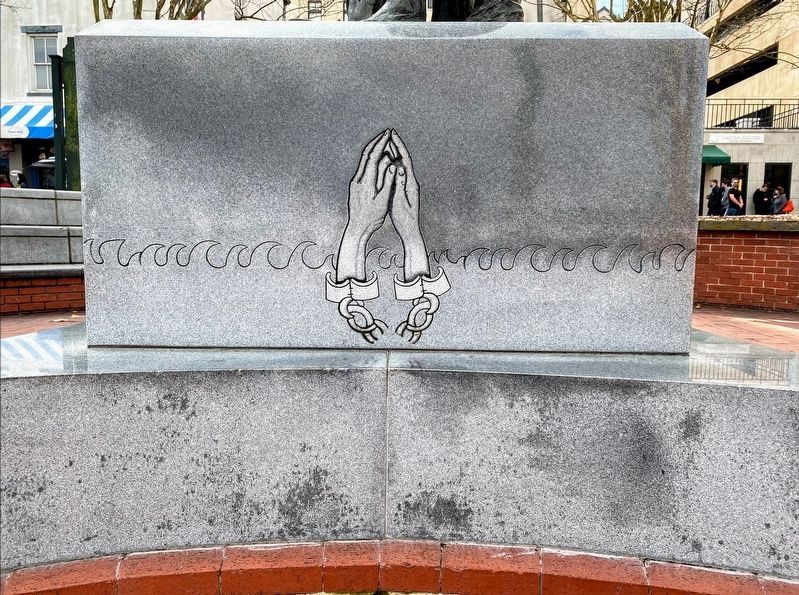