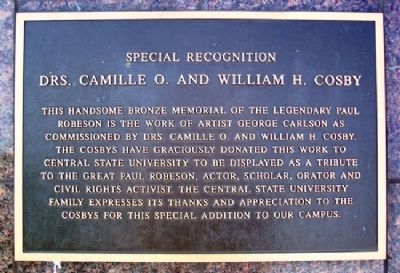 This handsome bronze memorial of the legendary Paul Robeson is the work of artist George Carlson as commissioned by Drs. Camille O. and William H. Cosby. The Cosbys have graciously donated this work to Central State University to be displayed as a tribute to the great Paul Robeson, actor, scholar, orator and Civil Rights activist. The Central State University Family expresses its thanks and appreciation to the Cosbys for this special addition to our campus.

Topics and series. This historical marker is listed in these topic lists: African Americans • Arts, Letters, Music • Civil Rights • Man-Made Features. In addition, it is included in the Historically Black Colleges and Universities series list.

Location. 39° 42.958′ N, 83° 52.708′ W. Marker is in Wilberforce, Ohio, in Greene County. Marker is at the intersection of Wesley Drive and Maplewood Avenue, on the left when traveling north on Wesley Drive. Marker is near the Paul Robeson Cultural 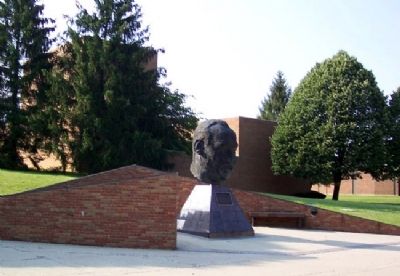 Click or scan to see
this page online
and Performing Arts Center, on the campus of Central State University. Touch for map. Marker is in this post office area: Wilberforce OH 45384, United States of America. Touch for directions.

Other nearby markers. At least 8 other markers are within walking distance of this marker. Hallie Quinn Brown (within shouting distance of this marker); Brigadier General Benjamin Oliver Davis, Sr. (about 300 feet away, measured in a direct line); Galloway Hall (about 600 feet away); Central State University (about 600 feet away); Martin Robison Delany (approx. 0.2 miles away); Old Wilberforce University Campus at Tawawa Springs (approx. 0.2 miles away); Carnegie Library (1907) (approx. ¼ mile away); Kezia Emery Hall (1913) (approx. ¼ mile away). Touch for a list and map of all markers in Wilberforce. 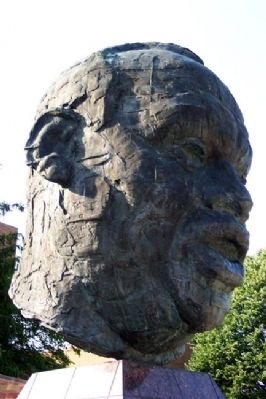