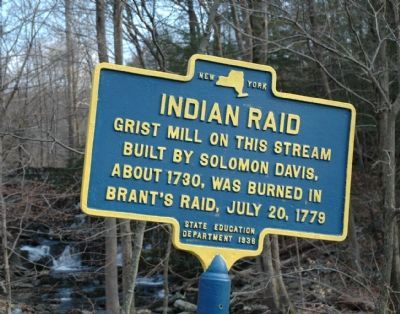 By Bruce T. Crandall, May 1965
1. Indian Raid Marker
Inscription.
Indian Raid. . Grist mill on this stream built by Solomon Davis, about 1730, was burned in Brant's raid, July 20, 1779 . This historical marker was erected in 1936 by State Education Department. It is Near Port Jervis in Orange County New York

Topics. This historical marker is listed in these topic lists: Native Americans • War, US Revolutionary. A significant historical month for this entry is July 1779.