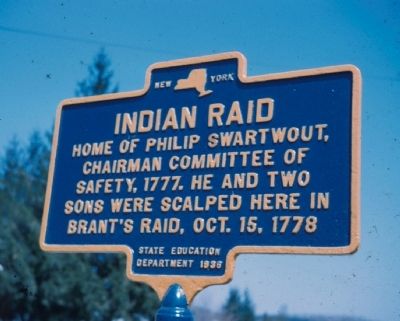 Photographed By Bruce T. Crandall, circa May 1965
1. Indian Raid Marker
Inscription.
Indian Raid. . Home of Philip Swartwout, Chairman Committee of Safety, 1777. He and two sons were scalped here in Brant's raid, Oct. 15, 1778. . This historical marker was erected in 1936 by State Education Department. It is in Huguenot in Orange County New York

Topics. This historical marker is listed in these topic lists: Native Americans • War, US Revolutionary. A significant historical year for this entry is 1777.