Dedicated to the Family of Don Ignacio Martinez 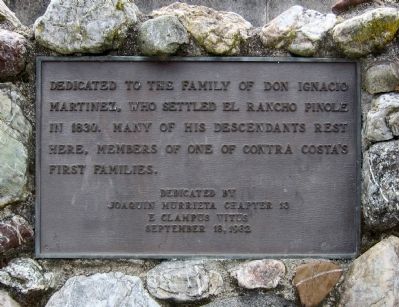 Dedicated to the family of Don Ignacio Martinez, who settled El Rancho Pinole in 1830. Many of his descendants rest here, members of one of Contra Costa's first families.

Topics and series. This historical marker is listed in these topic lists: Cemeteries & Burial Sites • Settlements & Settlers. In addition, it is included in the E Clampus Vitus series list. A significant historical month for this entry is September 1825.

Location. 38° 1.047′ N, 122° 8.704′ W. Marker is in Martinez, California, in Contra Costa County. Marker is on Carquinez Scenic Drive 0.1 miles west of Talbart Street. The marker is located just footsteps away from the entrance of St. Catherine of Siena's Cemetery (which is almost immediately across the street from the entrance to the Alhambra Cemetery.) Note, also, that Carquinez Scenic Road is also known as Snake Road. Touch for map. Marker is in this post office area: Martinez CA 94553, United States of America. Touch for directions. 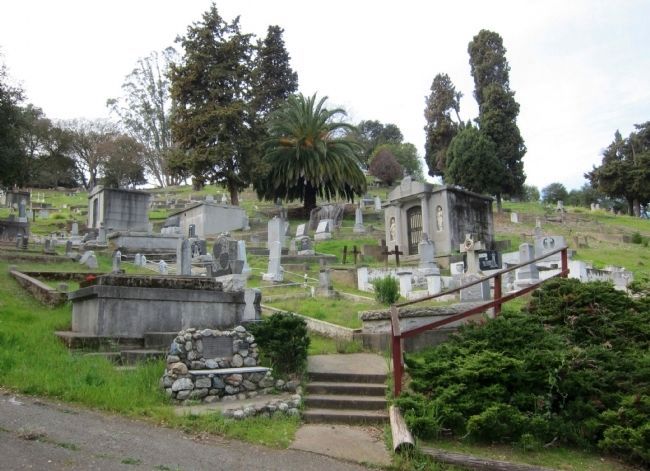 By Andrew Ruppenstein, February 26, 2012
2. Dedicated to the Family of Don Ignacio Martinez Marker - wide view
The marker is visible here mounted to the stone bench/monument to the immediate left of the steps. There is a smaller plaque next to the marker reading "Anna's Bench".