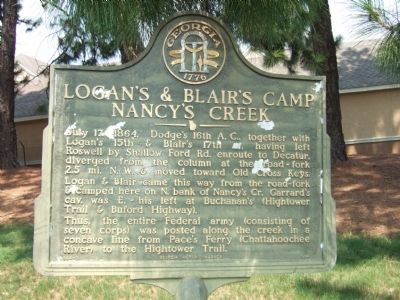 Photographed By Felch Dumas, July 20, 2008
1. Logan's & Blair's Camp Nancy's Creek Marker
Inscription.
Logan's and Blair's Camp Nancy's Creek. . July 17, 1864. Dodge's 16th A.C., together with Logan's 15th and Blair's 17th (US), having left Roswell by Shallow Ford Rd. enroute to Decatur, diverged from the column at the road - fork 2.5 mi. N.W. and moved towards Old Cross Keys. Logan and Blair came this way from the road-fork and camped here on N. bank of Nancy's Cr. Garrard's cav. was E.-his left at Buchanan's (Hightower Trail and Buford Highway)., Thus, the entire Federal army (consisting of seven corps) was posted along the creek in a concave line from Pace's Ferry (Chattahoochee River) to the Hightower Trail. . This historical marker was erected in 1984 by Georgia Department of Natural Resources. It is in Dunwoody in DeKalb County Georgia

Thus, the entire Federal army (consisting of seven corps) was posted along the creek in a concave line from Pace's Ferry (Chattahoochee River) to the Hightower Trail.

Topics and series. This historical marker is listed in this topic list: War, US Civil. In addition, it is included in the Georgia Historical Society series list. A significant historical date for this entry is July 17, 1835. 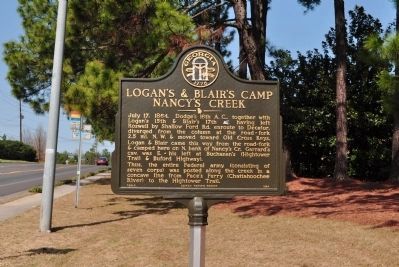 Click or scan to see
this page online
. Marker is in this post office area: Atlanta GA 30338, United States of America. Touch for directions.

More about this marker. The marker and post were damaged by a vehicle, and were removed in 2011. The marker was repaired and reinstalled on a new post in 2012. 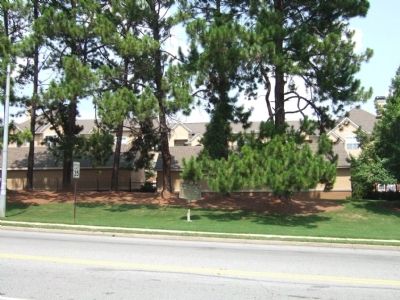 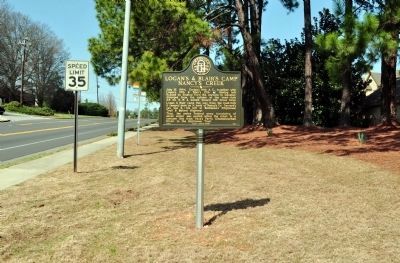