Who was Henry Davis? 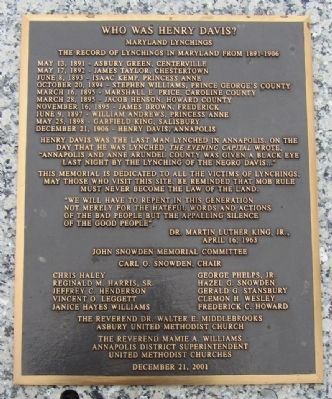 Henry Davis was the last man lynched in Annapolis. On the day that he was lynched, The Evening Capital wrote, "Annapolis and Anne Arundel County was given a black eye last night by the lynching of the negro Davis..."

This memorial is dedicated to all the victims of lynchings. May those who visit this site, be reminded that mob rule must never become the law of the land.

"We will have to repent in this generation not merely for the hateful words and actions of the bad people but the appalling silence of the good people". - Dr. Martin Luther King, Jr., April 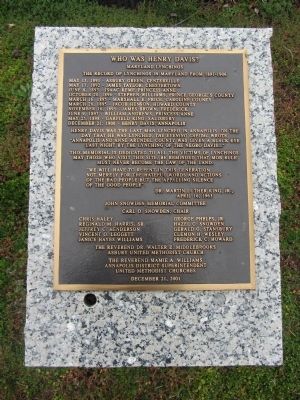 Topics. This historical marker is listed in these topic lists: African Americans • Cemeteries & Burial Sites • Civil Rights. A significant historical month for this entry is March 1832.

Location. 38° 58.615′ N, 76° 30.426′ W. Marker is in Annapolis, Maryland, in Anne Arundel County. Marker can be reached from the intersection of West Street (Maryland Route 450) and Brewer Avenue. The marker is inside the Brewer Hill Cemetery, about 100 feet in, and all the way to the left alongside the cemetery fence. Touch for map. Marker is in this post office area: Annapolis MD 21401, United States of America. Touch for directions. 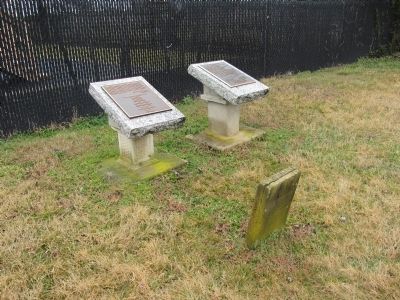 Photographed By F. Robby, March 3, 2012
3. Brewer Hill Cemetery Markers
The Henry Davis marker is on the right, next to a marker for John Snowden, an African-American who was was the last person executed in Anne Arundel County but who was also posthumously pardoned in 2001.
(about 500 feet away); A National Cemetery System (about 500 feet away); Annapolis During The Civil War (about 700 feet away); Brown-Leanos Memorial Park (about 800 feet away); Sharpening Our Governing Teeth: The 1708 Charter of Annapolis (approx. 0.2 miles away). Touch for a list and map of all markers in Annapolis.

More about this marker. The marker is in the cemetery where Henry Davis was buried, in an unmarked grave of unknown location.

Regarding Who was Henry Davis?. From the Maryland State Archives (MSA SC 3520-13635): Henry Davis was lynched in Annapolis on December 21, 1906. Davis had been arrested for the assault of Mrs. John Reid. He was removed from the jail on Calvert Street and paraded through the town, before being hanged in a tree along College Creek. No one was ever charged with participating in the lynching. Davis had previously served time at the Maryland Penitentiary on an assault charge. He is buried in the smallpox section of Brewer Hill Cemetery.

Additional commentary.
1. First Lynching Memorial in Maryland, Possibly the Country
That is what is claimed in this article of The Baltimore Sun:

In Annapolis, remembering the horrors, victims of lynching 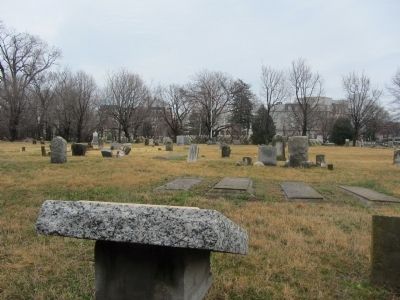 The mob pronounced Henry Davis guilty, the man the papers called the "ravisher of Mrs. Reid."

They broke into the jail a few blocks from the State House and kidnapped him, paraded him through the black community before lynching him from a chestnut tree on Brickyard Hill and riddling his body with bullets.

Hundreds of people, black and white, came to the bluff overlooking College Creek to see the body of the last man lynched in Annapolis. A photographer took pictures of the battered corpse, which he turned into postcards that sold two for 25 cents.

Ninety-five years later, African-American leaders are asking Annapolitans to remember Davis' long-forgotten, gruesome death Dec. 21, 1906, five days after he was arrested on suspicion of assaulting a white woman, Annie Reid. Though his remains are lost in an unmarked grave in Brewer Hill Cemetery, his name is inscribed in a plaque there that reads: "May those who visit this site be reminded that mob rule must never become the law of the land."

The plaque is the first memorial to lynching victims in the state, and organizers say it might be the only one in the country.

"It is our hope that you never forget Henry Davis and you make it your purpose to speak out about discrimination so that this will never happen again," Gerald Stansbury, president of the Anne Arundel County chapter of the National Association for the Advancement of Colored People, told the crowd at the graveyard ceremony yesterday.

Mayor Ellen O. Moyer read a proclamation declaring the anniversary of Davis' death "A Day of Justice and Remembrance" in the city and asked residents "to redouble their appreciation for the rule of law and spirit of tolerance as a guidepost for generations yet unborn."

About 46 people were lynched in Maryland from 1861 through 1933, according to C. Christopher Brown, an attorney with the Baltimore firm Brown, Goldstein & Levy who is writing a book about African-Americans in Maryland during that period and was the speaker at yesterday's event.

Davis and the nine other men lynched between 1891 and 1906 are listed on the plaque at Brewer Hill Cemetery. All but one was black. The last lynching in the state occurred in Princess Anne in 1933, Brown said.

"The attitude and the aura of white supremacy was everywhere," Brown said about Maryland in those first years of the 20th century.

The story of Henry Davis might have gone untold this century, had it not been rediscovered by those researching the execution of John Snowden, a black man who was the last person publicly executed on the gallows in Anne Arundel County in 1919. The committee, headed by former Annapolis city council member Carl O. Snowden (no relation), successfully petitioned for a posthumous pardon, which was granted by Gov. Parris N. Glendening in June.

While there was much doubt about John Snowden's guilt, Davis is a much more unlikely historical hero. He had several aliases, was convicted of a previous assault and, the papers said, confessed to brutalizing Annie Reid.