Visionaries of the 1960s 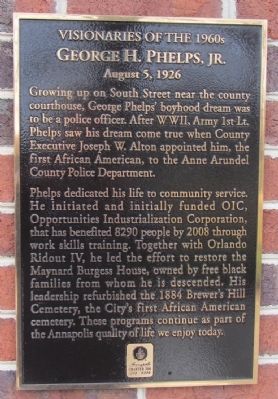 By F. Robby, March 3, 2012
1. Visionaries of the 1960s Marker
Inscription.
George H. Phelps, Jr.. Visionaries of the 1960s. Growing up on South Street near the county courthouse, George Phelps' boyhood dream was to be a police officer. After world war two, Army 1st Lt. Phelps saw his dream come true when County Exective Joseph W. Alton appointed him, the first African American, to the Anne Arundel County Police Department. . . Phelps dedicated his life to community service. He initiated and initially funded OIC, Opportunities Industrialization Corporation, that has benefited 8290 people by 2008 through work skills training. Together with Orlando Ridout IV, he led the effort to restore the Maynard Burgess House, owned by free black families from whom he is descended. His leadership refurbished the 1884 Brewer's Hill Cemetery, the City's first African American cemetery. These programs continue as part of the Annapolis quality of life we enjoy today. . This historical marker is in Annapolis in Anne Arundel County Maryland

Growing up on South Street near the county courthouse, George Phelps' boyhood dream was to be a police officer. After WWII, Army 1st Lt. Phelps saw his dream come true when County Exective Joseph W. Alton appointed him, the first African American, to the Anne Arundel County Police Department.

Phelps dedicated his life to community service. He initiated and initially funded OIC, Opportunities Industrialization Corporation, that has benefited 8290 people by 2008 through work skills training. Together with Orlando Ridout IV, he led the effort to restore the Maynard Burgess House, owned by free black families from whom he is descended. His leadership refurbished the 1884 Brewer's Hill Cemetery, the City's first African American cemetery. These programs continue as part of the Annapolis quality of life we enjoy today. 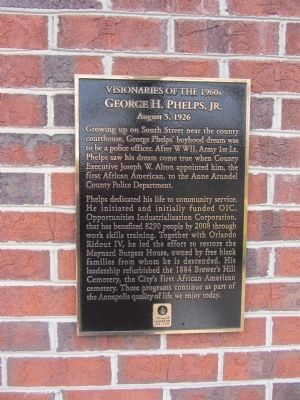 By F. Robby, March 3, 2012
2. Visionaries of the 1960s Marker
is at the intersection of West Street (Maryland Route 450) and Brewer Avenue, on the right when traveling west on West Street. Touch for map. Marker is in this post office area: Annapolis MD 21401, United States of America. Touch for directions.

More about this marker. Marker is on the cemetery building to the left as you enter the cemetery.

Additional comments.
1. About George Phelps
From The Baltimore Sun:

The man on the phone sounded alarmed about what he had just seen: a black man apparently posing as a deputy sheriff, walking around Annapolis in uniform, even carrying a revolver.

The man called Anne Arundel County Sheriff Joseph Alton because he thought Alton should know about this immediately. Alton did know, because Alton had deputized the tall, black 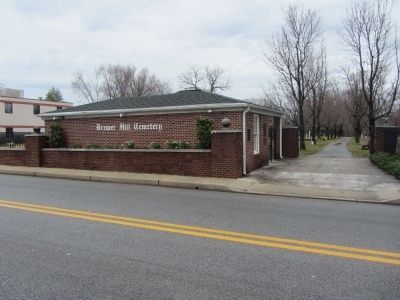 By F. Robby, March 3, 2012
3. Brewer Hill Cemetery
Marker is on the side of the building as you pass into the cemetery.
man, put him in the dark blue uniform, given him the gun and sent him out on the streets of Annapolis that day in 1951.

Thus, the city had its first glimpse of George Phelps Jr. in the role of enforcer and keeper of the peace, a role Phelps would later turn into a successful business and be called upon to play time and again in the city.

He is now 65, president and owner of the $3-million-a-year Phelps Protection Systems Inc. of Annapolis.

When you talk to Phelps, it is easy enough to forget that he is a businessman dealing with corporations like IBM or negotiating with federal agencies like the Department of Energy. The cadence of his speech smacks less of the board room than of the pulpit, as he expounds on criminal justice, city violence and the work ethic, asserting again and again that "the truth will set you free."

He'll raise his voice andstretch his long arms wide to make a point about how citizens need to get involved to improve their communities and to help the police, then drop to a whisper to convey his despair at the violence that plagues impoverished black city neighborhoods.

Phelps Protection Systems Inc. has come a long way since 1974, when Phelps opened the business in his house on Drew Street with 10 employees. But Phelps himself affects no distance from the South Street, Annapolis neighborhood or the Methodist church in which he was raised.

His firm -- with about two-thirds minority employees -- recruits prospective workers from the city's neighborhoods and fraternal organizations.

The sad thing, he said, is that it has become difficult to find minority recruits who can fulfill one of his key requirements: no criminal record.

"Today, 10 people came through that door" to apply for work, said Phelps. "Of all those people, all those people had something" to cause their application to be sent back after a check by the Maryland State Police. "It's pitiful for me to say, but the truth sets us free."

Phelps carried his quest for minority job opportunities beyond his own company in 1978, when he founded an Annapolis chapter of Opportunities Industrialization Center, a national non-profit organization thattrains people for entry-level jobs.

Phelps has been famous for recruiting minority employees ever since he mustered and trained a force of about 200 special deputy sheriffs -- all of them black -- starting in 1952.

The force of privately paid officers maintained order for years during concerts at Carr's Beach Club, the segregated beach in Eastport where blacks by the thousands from Baltimore and Washington would converge in summers for performances by such stars as James Brown and Jackie Wilson.

From the ranks of those special deputies rose a number of men who moved on to become full-time officers in theAnnapolis and Anne Arundel County police departments. Phelps -- who served in the military police during World War II -- turned to the sheriff's department for work when he was spurned by the city, county and state police.

Alton, who knew Phelps and his family, made him the county's first black deputy sheriff in 1951, at a time when the county employed blacks for nothing but "broom-and-shovel" work.

"George was the first person in the county to be a symbol of something other than" menial labor, said Alton, who later became Anne Arundel's first county executive. Phelps, he said, "had the respect very quickly of the police department. It was amazing the ability the fellow had as a police officer."

It was a skill the city's political leaders would come to rely upon in times of trouble.

"Whenever I needed help in law enforcement, race relations, I called on George," said Moyer. "More than anyone," he said, Phelps was "responsible for keeping riots from breaking out" in the city.

His advantage was information. Through his contacts in the blackcommunity, he got wind of plans by people from Washington and Baltimore to set fires all over the city. After meetings of state, county and city law enforcement officials at his home, Phelps said police andsheriff's deputies confiscated boxes of Molotov cocktails.

It was no magic, said Phelps; it was knowledge. He said he believes police have lost control of their communities because they have lost touch with them.

His views on law enforcement have been sought by government and private organizations for years. Among his 27 organization affiliations are a board membership for Metro Crime Alert in Baltimore,the Governor's Commission on Law Enforcement and the Administration of Justice and the state Department of Parole and Probation, where heserves on the executive clemency board.

But then, Phelps always seemed to have a gift for getting people to listen to him, said Cecil C. Burton, who coached Phelps in football at Wiley H. Bates High School.