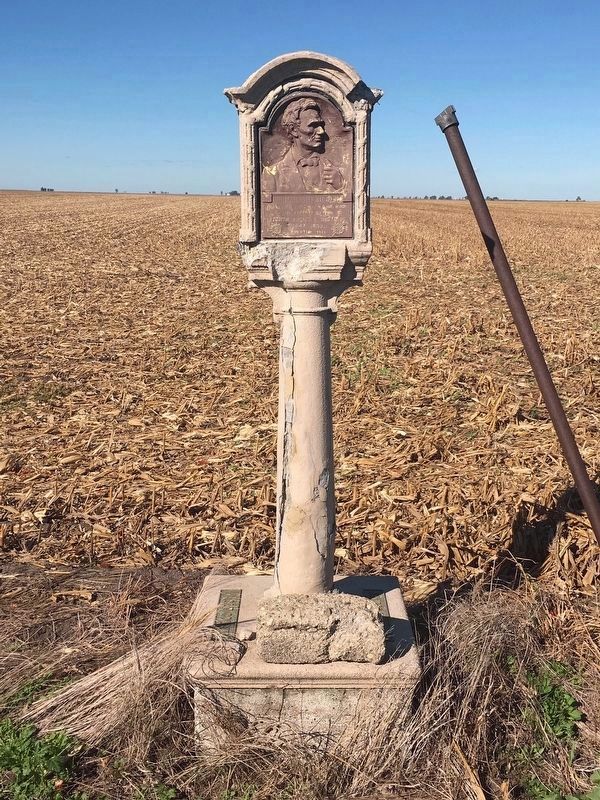 Topics and series. This historical marker is listed in these topic lists: Government & Politics • Roads & Vehicles. In addition, it is included in the Daughters of the American Revolution series list. 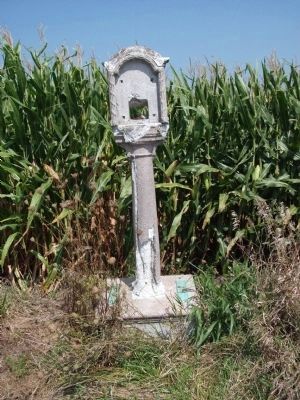 More about this marker. From Lake City, Illinois travel west on State Road #6 (County Road 2400N). Marker is on the north side of State Road #6, west of County Road 400E.

2. Travel with Lincoln. Climb into Lincoln’s buggy and take a trip with Lincoln and his fellow lawyers on the job traveling Illinois as Circuit Lawyers. See all the Lincoln Circuit Markers (and a surprise or two), in the order of his travels while a member of the Circuit of the Eighth Judicial District (of Illinois) during 1847-1857. Use the “First >>” button in the upper right to see these markers in sequence, starting from Springfield. (Submitted on October 17, 2008, by Al Wolf of Veedersburg, Indiana.) 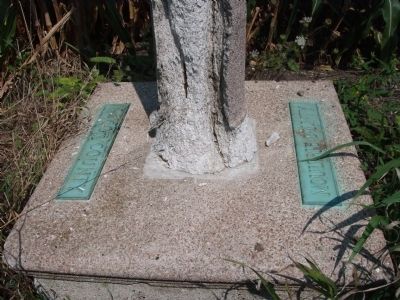 By Al Wolf, August 31, 2008
3. Marker's Base Post - - Denoting The Moultrie / Macon County Lines
The marker sits on Moultrie County land just over the the Macon County line.
The Forgotten Lincoln Circuit Markers" as published in the Winter 2004 edition of the "Journal of Abraham Lincoln Association".

Fraker is the "leading expert" on these markers. His research reported (as above) noted the condition of this marker.

On August 31, 2008 - these photos were taken. Said photos do not show much more deterioration (or improvement) occurring to this marker since Fraker's report of 2004.
— Submitted September 3, 2008, by Al Wolf of Veedersburg, Indiana.
2. Possible Replacement
I think the Daughters of the American Revolution (DAR) have taken on this task Note To Editor only visible by Contributor and editor
— Submitted September 17, 2008, by Desta Elliott of Niles, Illinois.
3. Marker looks wonderful!
I visited this marker today. The plaque is attached back on, the marker is straight, and it looks like it has been re-plastered and repaired on the back. In other words, it looks much better than the pictures on your site. I want to thank whoever is responsible for helping this monument and I hope and pray that is will continue to be preserved. I have lived in this county for 21 years and never knew this existed until I visited your web site recently. Thank you, too, to HMDB.ORG for all you do to bring recognition to history all around us!
— Submitted February 25, 2012.
4. "Your wonderful good news !" - - is great ! ! !
May we ask you a favor? Please could you photograph the restored marker and up-load your photos here on this page? It would be appreciated!

In case you find out who was kind enough to do the work improving the markers condition, please also feel free to add that information and any photos involved. This helpful historical information helps tell the story behind the marker, which is always welcome.
— Submitted March 5, 2012, by Al Wolf of Veedersburg, Indiana.
5. Highly Recommended Book!!
Fraker, Guy C. Looking for Lincoln in Illinois: A Guide to Lincoln’s Eighth Judicial Circuit. Carbondale, IL: Southern Illinois University Press, 2017; 130 pp.

If you’ve ever wanted to retrace Abraham Lincoln’s footsteps as a lawyer, Guy Fraker’s A Guide to Lincoln’s Eighth Judicial Circuit is exactly the book you need and a great starting point for your journey, even if you only take it vicariously. The third in the series of “Looking for Lincoln” guidebooks by the Looking for Lincoln Heritage Coalition, A Guide to Lincoln’s Eighth Judicial Circuit is the best way to tour the circuit short of having Guy Fraker, a retired lawyer, lead you in person. Printed on high quality glossy paper with dozens of color and black and white photographs and pictures, Fraker divides the tour into four segments, each of which has a basic map (not really adequate to use as a guide but much better than nothing), excellent turn-by-turn instructions, the locations of County Line Markers and Courthouse Markers, Wayside Exhibits, Lincoln points of interest, background information on people, places, and legal cases, unique Lincoln stories, as well as the inns and hotels where the legal entourage frequently stayed while on the circuit. Only two Courthouses in which Lincoln practiced law exist today, one in Metamora and the other in Mt. Pulaski, and both are gems. James Cornelius, curator of the Lincoln Collection at the Abraham Lincoln Presidential Library and Museum, suggests that three or four days be set aside to properly take in all the sites, and I agree with him. My son Alex and I scheduled a week, one day for each segment of Fraker’s tour plus three days in Springfield, and that was more than adequate. I also purchased a DeLorme map of Illinois with detailed county maps and that made life on the circuit much easier.
— Submitted October 20, 2018, by Dr. Tom Peet of Gahanna, Ohio.
6. Marker Condition - 2018
While in much better condition than it was in 2008, this marker is once again in need of some tender, loving care as you can see in the photograph above. Of the remaining 14 markers, it is in the greatest need of repair. Only the first marker, of which only a deteriorating concrete base remains (and which is not pictured in this series) is in worse condition.
— Submitted October 22, 2018, by Dr. Tom Peet of Gahanna, Ohio.
Credits. This page was last revised on November 17, 2019. It was originally submitted on September 3, 2008, by Al Wolf of Veedersburg, Indiana. This page has been viewed 2,331 times since then and 19 times this year. Last updated on March 4, 2012. Photos:   1. submitted on October 20, 2018, by Dr. Tom Peet of Gahanna, Ohio.   2, 3. submitted on September 3, 2008, by Al Wolf of Veedersburg, Indiana. • Bill Pfingsten was the editor who published this page.
Share This Page.