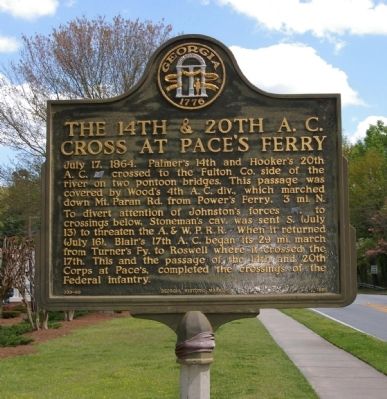 Topics and series. This historical marker is listed in this topic list: War, US Civil. In addition, it is included in the Georgia Historical Society series list. A significant historical date for this entry is July 17, 1864. 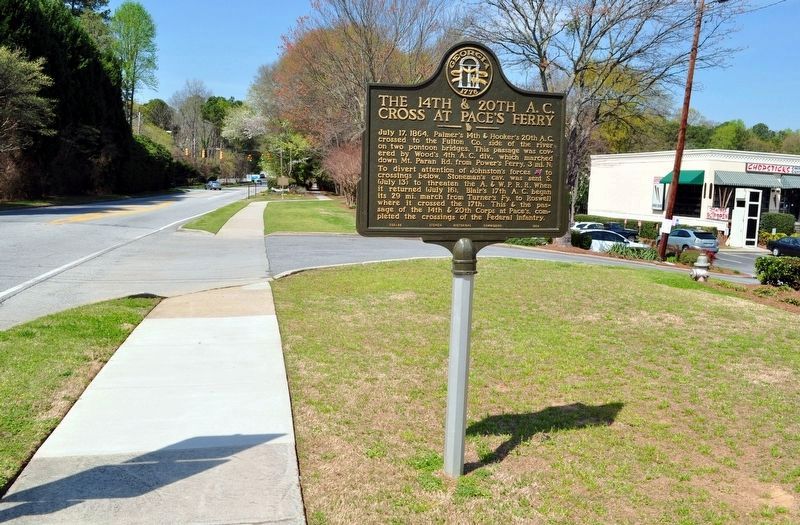 Photographed By David Seibert, March 17, 2012
2. The 14th & 20th A.C. Cross at Pace’s Ferry Markers
The marker in the foreground (this featured marker) is the first replacement, installed on a new post. In the background is the second replacement on the original post (HMdb.org marker #53668).

Other nearby markers. At least 8 other markers are within walking distance of this marker. The Errant Pontoon Bridge: Paces Ferry (a few steps from this marker); a different marker also named The 14th & 20th A.C. Cross at Pace’s Ferry (within shouting distance of this marker); Old Pace’s Ferry Road (approx. 0.2 miles away); Palmer’s & Hooker’s A.C. Cross the Chattahoochee (approx. ¼ mile away); Union Defense Line (approx. 0.3 miles away); Site: Hardy Pace’s Res. Howard’s Headquarters (approx. 0.7 miles away); The 4th Corps Posted Along the River (approx. ¾ mile away); The 4th Corps at Vining’s Station (approx. 0.9 miles away). Touch for a list and map of all markers in Vinings.

More about this marker. This marker is a duplicate of another marker (53668), standing 100 yards west on Paces Ferry Road. The original marker in that location has been erected in the late 1950s by the Georgia Historic Commission. It had disappeared, so a replacement was installed in 1985 (this marker). When this marker disappeared too, another replacement was cast and installed.