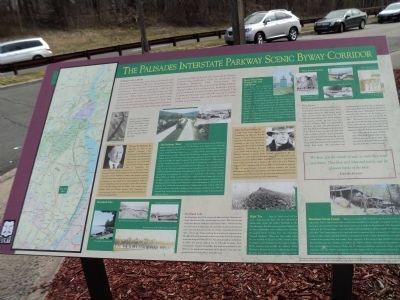 It Began with a Boom
Just over a century ago, more than a thousand cubic yards of the Palisades Cliffs were being blasted away every day for a growing New York in need of roads and foundations. The constant explosions could be felt and heard for miles, and a cloud of dust hung over the entire area. What began as an effort by New York’s wealthiest families to preserve their views from across the river quickly attracted the interest of New York Governor Theodore Roosevelt and New Jersey Governor Foster Voorhees, and in 1900 one of the first interstate institutions formed solely for the conservation of scenic features was established. Since its inception, the Palisades Interstate Park Commission has maintained its leadership in protecting wildlife habitat, cultural and recreational resources, funded by private and government donations both large and small. The Commission manages over 110,000 acres in 21 public parks and 8 historic sites, and welcomes over nine million annual visitors.

[ Sidebars : ]
Next to a photo of a hawk:
From the 730 foot summit of Hook Mountain, the Audubon Society Hawk Watch counts 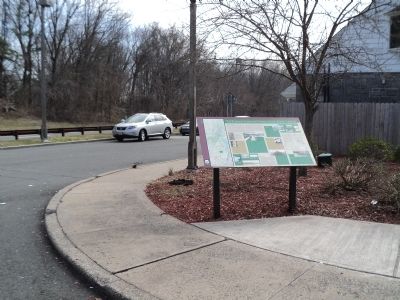 Click or scan to see
this page online
as many as 10,000 eagles, haws, osprey, and falcons during their fall migration last year down the Hudson river ridges.

Next to a photo of Perkins:
George W. Perkins, Sr.
Appointed in 1900 as the Palisades Interstate Park Commission’s first President and one of its ten commissioners, this rags-to-riches multi-millionaire combined his own funds with those of fellow business moguls John D. Rockefeller Sr., and J. Pierpont Morgan in the purchase or donation of the first tracts of land. Widely admired for his relentless passion and tenacity, he led the Palisades for twenty years through countless real estate transactions, and had an active hand in every aspect of inventing a new type of park for an urban population. Setting a tone for philanthropy that has endured for more than a century, the unwavering backing from the Perkins’ and countless other families allow the Palisades Interstate Park Commission to continue its grand work on one of the nation’s first public/private conservation partnerships.

Under a modern photo of the Parkway:
The Parkway Today Today’s 42 mile parkway from the George Washington Bridge to Bear Mountain embodies the best features of the limited access automobile parkways designed in the first half of the twentieth century. These include restricted access, broad, landscaped right-of-ways over rolling terrain, smooth driving 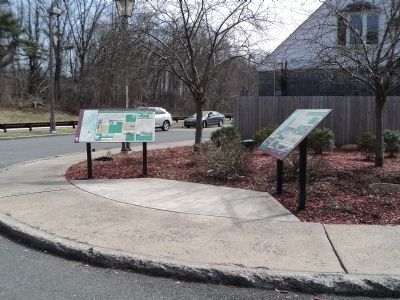 Photographed By Bill Coughlin, March 12, 2012
3. The Palisades Interstate Parkway Scenic Byway Corridor Marker
surfaces, elimination of cross traffic, fully separated driving lanes at different heights, generously banked curves and contrasting tones of pavement and curbs. Its landscaping and rustic stone faced bridges are noted throughout the world for their elegance. Although early accounts heralded the parkway for its state of the art transportation and safety features, the PIP was never conceived as an expressway, but rather, as a “drive through a park.” Thus, from the beginning speed limits were set at moderate levels because the road was intended for pleasure driving rather than high speed transportation. Those sharing primary responsibility for developing the concept, route, and design of the parkway included Major William A. Welch, a nationally known engineer and park designer who served as the PIPC’s general manager for almost forty years, the various planners and engineers of the Regional Plan Committee (including Jay Downer, chief engineer for the Bronx River Parkway), the well-known engineering firm of Amman and Combs, and the influential landscape architects and parkway designers Clarke, Rapuano and Holleran. In 1998, the National Park Service listed the Palisades Interstate Parkway on the National Register of Historic Places.

Next to a photo of the lighthouse:
Stony Point Historic Site and Lighthouse
The Stony Point Battlefield preserves the 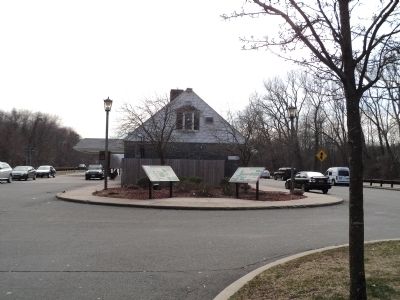 Photographed By Bill Coughlin, March 12, 2012
4. Markers on the PIP
Two markers are found at this location. The Palisades Interstate Parkway Scenic Byway Corridor marker is seen here on the left.
site of the last major battle of the American Revolution in the Northern States. Soon after the British captured the high, rocky peninsula in May 1779, Generals George Washington and Anthony Wayne devised a plan for its capture. On July 15-16, 1779, in a daring midnight assault, 1,150 well-trained light infantrymen, chosen specifically for the mission and led by Wayne himself, surprised and captured the 560-man garrison, gaining control of the fort within an hour. Also located at the site is the Stony Point Lighthouse that was built in 1826 among the ruins of the old British fort. Designed to aid navigation of the entrance to the Hudson Highlands, it was one of 14 lighthouses eventually protecting mariners on the Hudson River.

Next to his photo:
John D. Rockefeller, Jr.
In 1909, horse drawn carriages far outnumbered the first cars. But the notion of limited access roadways designed to test easily on the land was beginning to take root. While the shoreline and cliffs were safe from further development, preservation did not extend inland, and the summit of the Palisades remained in private hands. Through intermediaries, John D. Rockefeller, Jr. quietly began purchasing the land atop the cliffs, and by 1934 had spent nearly nine million dollars acquiring most of the 14 mile ribbon of land extending from Ft. Lee to Piermont. He offered this to the Palisades Interstate 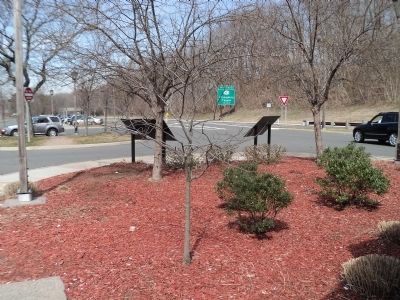 Photographed By Bill Coughlin, The Palisa
5. View of Marker from the South
Park Commission with the hope that it be developed as a parkway. Today’s 42 mile Palisades Interstate Parkway connects the George Washington and Bear Mountain Bridges, provides a direct and convenient route between New York City and the region’s parks, and beautifully links the themes of conservation, recreation, and transportation.

New Jersey Section
In 1896, as quarrying operations along the lower Hudson River were in full swing, a group of New Jersey women defied the odds stacked against them and took on the task of saving the cliffs. Through intensive lobbying, letter writing campaigns, and ceaseless tenacity, the New Jersey State Federation of Women’s Clubs’ voice was heard by politicians, the press, and philanthropists. In 1929, their efforts were recognized at the dedication of the Watch Tower, set atop the Cliffs they fought so hard to preserve. Today Rockefeller, Alpine, and State Line Lookouts provide sweeping views of the Hudson and New York City from above while Ross Dock and the Englewood and Alpine Boat Basins offer picnicking and recreational facilities at water’s edge. In the shadow of the George Washington Bridge lies the Fort Lee Historic Park, where Washington’s Continental Army placed its batteries over the Hudson. It is one of eight historic sites now managed by the PIPC. The Kearney House at Alpine Boat Basin, once the site of a fishing 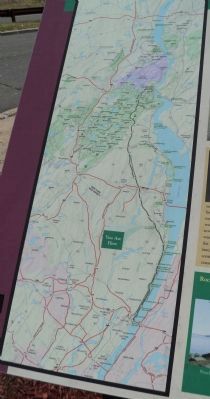 Photographed By Bill Coughlin, March 12, 2012
6. Map of the Palisades Interstate Parkway from the Marker
village and later a bathing beach, marks the site of the dedication of the Palisades Interstate Park Commission in 1909. At the ceremonies, George W. Perkins, Sr. commented that “Here, within sight of the great city is a little world of almost virgin nature which has been preserved for the people and now stands as a permanent monument to the discovery of the river by Henry Hudson”.

Rockland Lake
Rockland Lake State Park, along with adjacent Hock Mountain and Nyack Beach State Parks, incorporates more than 1800 acres of some of the most dramatic landscape in the Hudson Valley. Visitors enjoying its 2 golf courses, 4 swimming pools, and miles of nature trails only see scant signs that the area was the site of heavy industrial activity less than a century ago. Those watching the annual hawk migration atop the cliffs of Hook Mountain do so above one of the last of the quarrying operations along the Hudson River. Once again, through a combination of public and private funding led by Palisades Interstate Park Commissioner Laurence Rockefeller, this land was purchased in the 1950s for the benefit and enjoyment of the people. Today, they are among the most visited parks in the entire state.

Under a photo of the peak:
High Tor From the Dutch word “tor” for “peak”, High Tor State Park’s 650 acres and miles of hiking trails occupy the highest headlands in the Palisades region. The Tor has been a perennial inspiration for artists, playwrights, poets, and historians, including the painter Henry Varnum Poor and playwright Maxwell Anderson. When the Van Orden estate became available for $12,000 in 1942, members of the Rockland County Conservation Association sought a $1000 donation from wealthy art collector Archer Huntington. He gave the money – with one stipulation – that they also accept his 474-acre property next door.

Under a photo of cabins:
Harriman Group Camps Early in its existence, PIPC realized its special position to be socially responsible. The Commissioners believed that parks should be for all people, particularly for the under-privileged, who had little leisure time and no easy access to fresh air. Beginning in 1926, the commission established the Group Camps – tents and cabins, with waterfront facilities, to make the outdoors more accessible. The Commission provided land and funds to construct the first of nearly 100 camps around 13 mountain lakes, which coincided with the construction of a series of dams designed to create larger bodies of water from existing lakes and swamps. Early supporters of the Group Camps included social reformers like Jacob Riis and Jane Addams, the YMCA, the YWCA, almost every religious denominations, and the Boys and Girl Scouts of America. Today, the 32 remaining children’s and family camps, run by hiking, canoeing, civic and church organizations, in collaboration with the Commission, bring hope, learning, environmental awareness, and a wilderness experience to more than 5,000 children every day.
We hear afar the sounds of war, as rocks they rend
and shiver; They blast and mine and rudely scar the
pleasant banks of the river.
- Rudyard Kippling