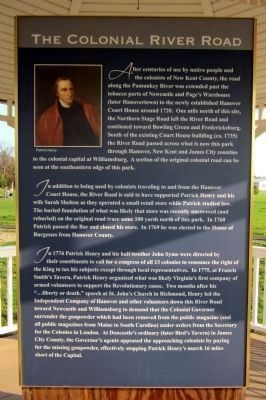 (side 1)
The Colonial River Road

After centuries of use by native people and the colonists of New Kent County, the road along the Pamunkey River was extended past the tobacco ports of Newcastle and Page’s Warehouse (later Hanovertown) to the newly established Hanover Court House around 1720. One mile north of this site, the Northern Stage Road left the River Road and continued toward Bowling Green and Fredericksburg. South of the existing Court House building (ca. 1735) the River Road passed across what is now this park through Hanover, New Kent and James City counties to the colonial capital at Williamsburg. A section of the original colonial road can be seen at the southeastern edge of this park.

In addition to being used by colonists traveling to and from the Hanover Court House, the River Road is said to have supported Patrick Henry and his wife Sarah Shelton as they operated a small retail store while Patrick studied law. The buried foundation of what was likely that store was recently uncovered (and reburied) on the original trace some 100 yards north of this park. In 1760 Patrick passed the 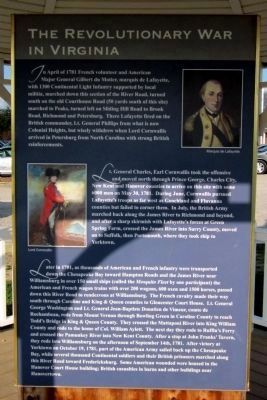 Photographed By Bernard Fisher, March 22, 2012
2. The Revolutionary War in Virginia (side 2)

Click or scan to see
this page online
Bar and closed his store. In 1769 he was elected to the House of Burgesses from Hanover County.

In 1774 Patrick Henry and his half-brother John Syme were directed by their constituents to call for a congress of all 13 colonies to renounce the right of the King to tax his subjects except through local representatives. In 1775, at Francis Smith’s Tavern, Patrick Henry organized what was likely Virginia’s first company of armed volunteers to support the Revolutionary cause. Two months after his “…liberty or death.” speech at St. John’s Church in Richmond, Henry led the Independent Company of Hanover and other volunteers down this River Road toward Newcastle and Williamsburg to demand that the Colonial Governor surrender the gunpowder which had been removed from the public magazine (and all public magazines from Maine to South Carolina) under orders from the Secretary for the Colonies in London. At Doncastle’s ordinary (later Bird’s Tavern) in James City County, the Governor’s agents appeased the approaching colonists by paying for the missing gunpowder, effectively stopping Patrick Henry’s march 16 miles short of the Capital.

(side 2)
The Revolutionary War in Virginia 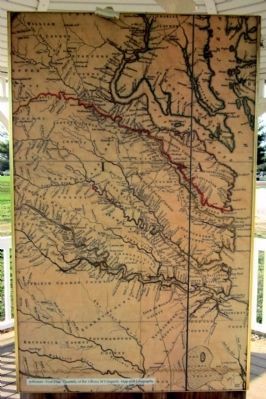 Photographed By Bernard Fisher, March 22, 2012
3. Jefferson- Frye Map (side 3)
local militia, marched down this section of the River Road, turned south on the old Courthouse Road (50 yards south of this site) marched to Peaks, turned left on Sliding Hill Road to Brook Road, Richmond and Petersburg. There Lafayette fired on the British commander, Lt. General Phillips from what is now Colonial Heights, but wisely withdrew when Lord Cornwallis arrived in Petersburg from North Carolina with strong British reinforcements.

Lt. General Charles, Earl Cornwallis took the offensive and moved north through Prince George, Charles City, New Kent and Hanover counties to arrive on this site with some 6000 men on May 30, 1781. During June, Cornwallis pursued Lafayette’s troops as far west as Goochland and Fluvanna counties but failed to corner them. In July, the British Army marched back along the James River to Richmond and beyond, and after a sharp skirmish with Lafayette’s forces at Green Spring Farm, crossed the James River into Surry County, moved on to Suffolk, then Portsmouth, where they took ship to Yorktown.

Later in 1781, as thousands of American and French infantry were transported down the Chesapeake Bay toward Hampton Roads and the James River near Williamsburg in over 150 small ships (called the Mosquito Fleet by one participant) the American and French wagon trains with over 200 wagons, 600 oxen and 1500 horses, passed down this 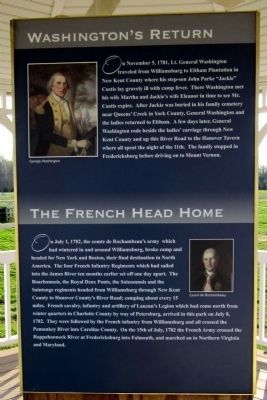 Photographed By Bernard Fisher, March 22, 2012
4. Washington's Return & The French Head Home (side 4)
River Road to rendezvous at Williamsburg. The French cavalry made their way south through Caroline and King & Queen counties to Gloucester Court House. Lt. General George Washington and Lt. General Jean-Baptiste Donatien de Vimeur, comte de Rochambeau, rode from Mount Vernon through Bowling Green in Caroline County to reach Todd’s Bridge in King & Queen County. They crossed the Mattaponi River into King William County and rode to the home of Col. William Aylett. The next day they rode to Ruffin’s Ferry and crossed the Pamunkey River into New Kent County. After a stop at John Franks’ Tavern, they rode into Williamsburg on the afternoon of September 14th, 1781. After victory at Yorktown on October 19, 1781, part of the American Army sailed back up the Chesapeake Bay, while several thousand Continental soldiers and their British prisoners marched along this River Road toward Fredericksburg. Some American wounded were housed in the Hanover Court House building; British casualties in barns and other buildings near Hanovertown.

(side 3)
Jefferson - Frye Map, Courtesy of the Library of Congress, Map and Geography 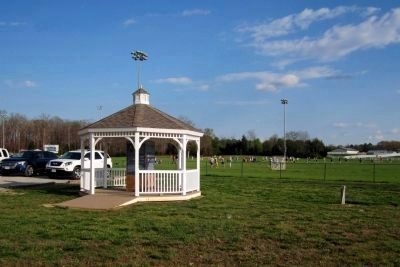 Photographed By Bernard Fisher, March 22, 2012
5. Courtland Park Gazebo
ill with camp fever. There Washington met his wife Martha and Jackie’s wife Eleanor in time to see Mr. Custis expire. After Jackie was buried in his family cemetery near Queens’ Creek in York County, General Washington and the ladies returned to Eltham. A few days later, General Washington rode beside the ladies’ carriage through New Kent County and up this River Road to the Hanover Tavern where all spent the night of the 11th. The family stopped in Fredericksburg before driving on to Mount Vernon.

On July 1, 1782, the comte de Rochambeau’s army which had wintered in and around Williamsburg, broke camp and headed for New York and Boston, their final destination in North America. The four French Infantry Regiments which had sailed into the James River ten months earlier set off one day apart. The Bourbonnois, the Royal Deux Ponts, the Soissonnois and the Saintonge regiments headed from Williamsburg through New Kent County to Hanover County’s River Road; camping about every 15 miles. French cavalry, infantry and artillery of Lauzun’s Legion which had come north from winter quarters in Charlotte County by way of Petersburg, arrived in this park on July 8, 1782. They were followed by the French infantry from Williamsburg and all crossed the Pamunkey River into Caroline County. On the 15th of July, 1782 the French Army crossed the Rappahannock 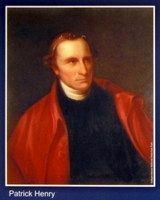 6. Patrick Henry
River at Fredericksburg into Falmouth, and marched on to Northern Virginia and Maryland.

Topics and series. This historical marker is listed in these topic lists: Colonial Era • Roads & Vehicles • War, US Revolutionary. In addition, it is included in the Former U.S. Presidents: #01 George Washington series list. A significant historical year for this entry is 1720. 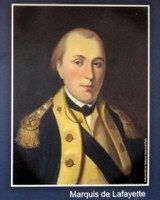 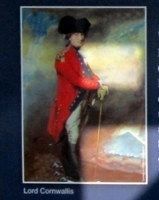 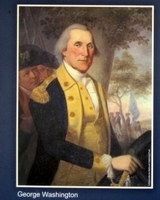 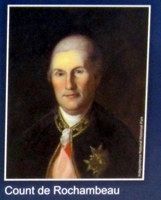 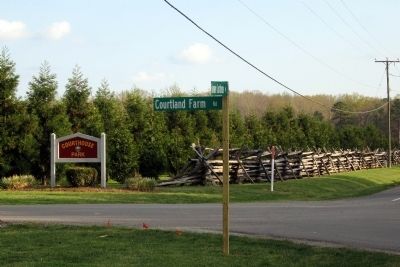