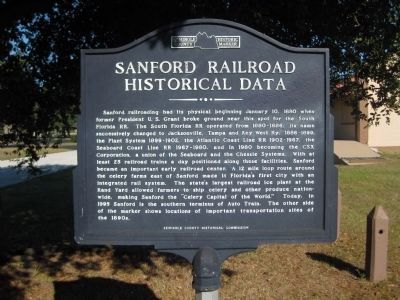 (Front side):
Sanford railroading had its physical beginning January 10, 1880 when former President U. S. Grant broke ground near this spot for the South Florida RR. The South Florida RR operated from 1880-1886, its name successively changed to Jacksonville, Tampa and Key West Ry, 1886-1899, the Plant System 1899-1902, the Atlantic Coast Line RR 1902-1967, the Seaboard Coast Line RR 1967-1980, and in 1980 becoming the CSX Corporation, a union of the Seaboard and the Chessie Systems. With at least 25 railroad trains a day positioned along these facilities, Sanford became an important early railroad center. A 12 mile loop route around the celery farms east of Sanford made it Florida's first city with an integrated rail system. The state's largest railroad ice plant a the Rand Yard allowed farmers to ship celery and other produce nation-wide, making Sanford the "Celery Capital of the World." Today, in 1995 Sanford is the southern terminus of Auto Train. The other side of the marker shows locations of important transportation sites of the 1890s.

(Reverse side):
[ Map - (Labeled features are listed below) ]
Lake 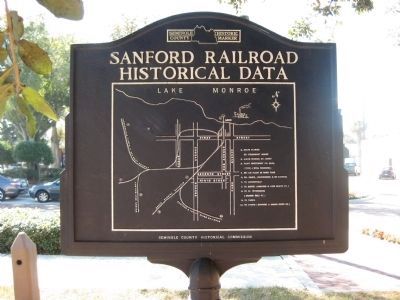 Topics. This historical marker is listed in these topic lists: Agriculture • Railroads & Streetcars • Waterways & Vessels. A significant historical date for this entry is January 10, 1940.

Other nearby markers. At least 8 other markers are within walking distance of this marker. The PICO Block (about 400 feet away, measured in a direct line); The PICO Hotel, Restaurant, and Stores (about 600 feet away); 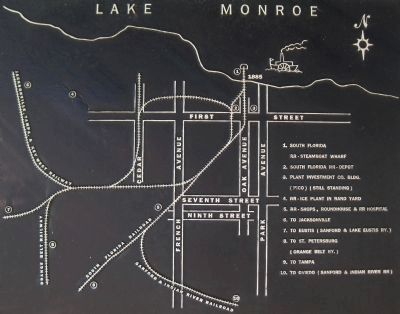 More about this marker. The double-sided marker is capped on both sides with the Seminole County Historic Marker logo.

Regarding Sanford Railroad Historical Data. Sanford has lost much of the extensive, 1890s-era rail system detailed on the marker's map. Railroad facilities like the depot, maintenance shops, roundhouse, hospital, etc., are gone, along with the old steamboat wharf. The train tracks indicated on the map that once wove their way throughout the city have shrunk considerably, with large sections of railway removed once the various railroad companies consolidated and the tracks were deemed unnecessary or undesirable.

Not all the buildings from Sanford's railroad heyday are gone. As noted on the map, the office building built by Henry B. Plant's investment company still stands, and is known as the "PICO block". It is joined by other Plant projects, the PICO Hotel and its adjacent 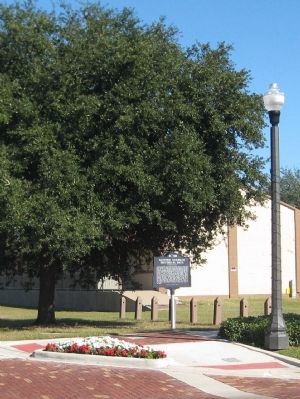 Photographed By AGS Media, December 30, 2011
4. Sanford Railroad Historical Data Marker
PICO Restaurant and Stores building, all built to service railroad passengers and business. The PICO buildings have been honored with their own historical markers (see "Other nearby markers" above).

Sanford still holds a prominent role in rail transportation as the home of Amtrak's Auto Train. The Sanford Amtrak station is the southern terminus for Auto Train, which carries passengers and their automobiles north on an overnight, non-stop trip to Lorton, Virginia, just outside Washington, DC. 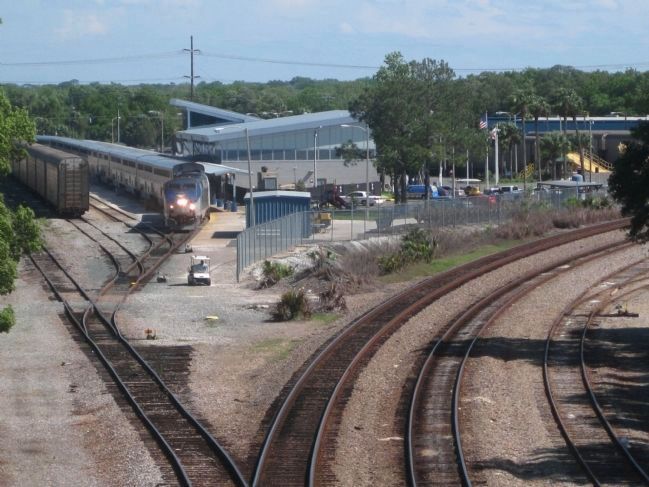 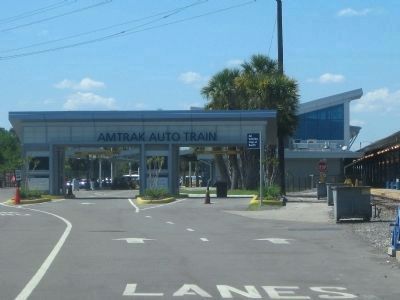 Photographed By AGS Media, March 25, 2012
6. Amtrak Auto Train Station
Built in 2010, Sanford's current Amtrak station is used exclusively for the Auto Train, and is one of only two such stations in the country. It replaced a 1971 facility (located on this same site). Amtrak's conventional passenger trains bypass Sanford, instead stopping in nearby DeLand, Winter Park, or Orlando. 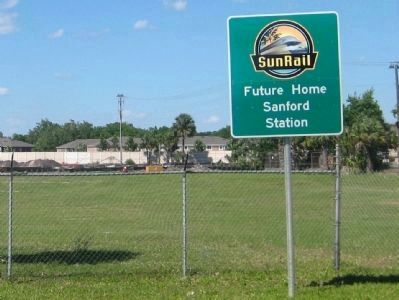 Photographed By AGS Media, March 25, 2012
7. SunRail - Future site of Sanford Station
The Florida Department of Transportation is building the SunRail commuter rail system between DeLand to the north and Poinciana to the south. It will connect Sanford with Winter Park, Orlando, Kissimmee, and points in between. The Sanford Station should begin operations by 2014. 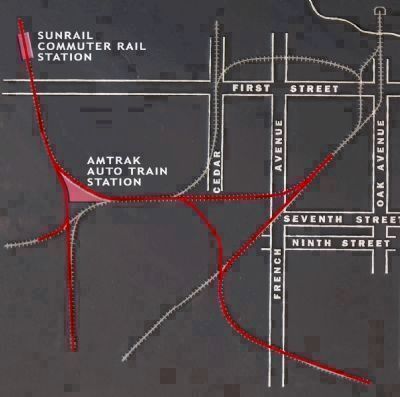