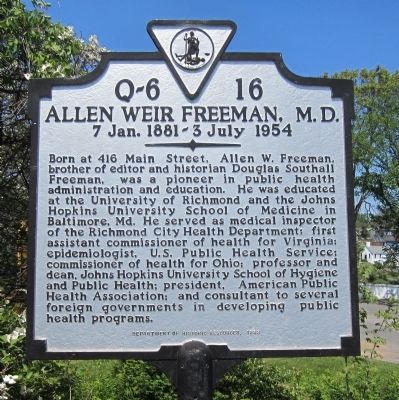 Born at 416 Main Street, Allen W. Freeman, brother of editor and historian Douglas Southall Freeman, was a pioneer in public health administration and education. He was educated at the University of Richmond and the Johns Hopkins University School of Medicine in Baltimore, Md. He served as medical inspector of the Richmond City Health Department; first assistant commissioner of health for Virginia; epidemiologist, U.S. Public Health Service; commissioner of health for Ohio; professor and dean, Johns Hopkins University School of Hygiene and Public Health; president, American Public Health Association; and consultant to several foreign governments in developing public health programs. 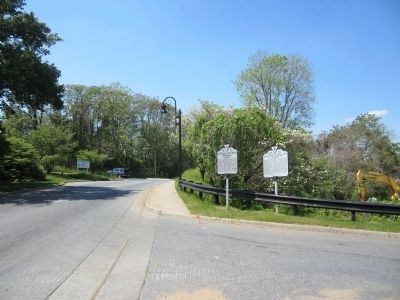 Click or scan to see
this page online
Route 163), on the right when traveling west on Main Street. Touch for map. Marker is at or near this postal address: 422 Main Street, Lynchburg VA 24504, United States of America. Touch for directions.

Other nearby markers. At least 8 other markers are within walking distance of this marker. Douglas Southall Freeman (here, next to this marker); Lynchburg History (about 300 feet away, measured in a direct line); The Academy of Music (1905-1958) (about 300 feet away); a different marker also named Lynchburg History (about 700 feet away); Court Street Baptist Church (about 800 feet away); Abram Frederick Biggers and Biggers School (approx. 0.2 miles away); Point of Honor (approx. 0.2 miles away); Latham's Battery (approx. ¼ mile away). Touch for a list and map of all markers in Lynchburg.
Credits. This page was last revised on April 17, 2020. It was originally submitted on April 14, 2012, by Bernard Fisher of Richmond, Virginia. This page has been viewed 447 times since then and 12 times this year. Photos:   1, 2. submitted on April 14, 2012, by Bernard Fisher of Richmond, Virginia.
Share This Page.