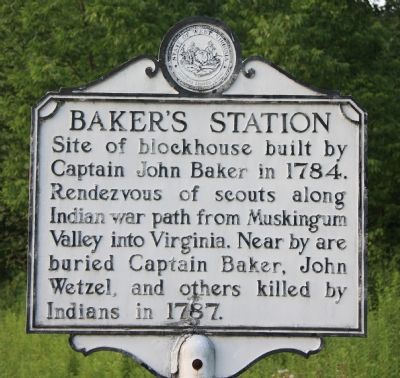 Photographed By Dale K. Benington, July 15, 2011
1. Baker's Station Marker
Close-up view of the text on the historic marker.
Inscription.
Baker's Station. . Site of blockhouse built by Captain John Baker in 1784. Rendezvous of scouts along Indian war path from Muskingum Valley into Virginia. Near by are buried Captain Baker, John Wetzel, and others killed by Indians in 1787. . This historical marker is Near Proctor in Marshall County West Virginia

Site of blockhouse built by Captain John Baker in 1784. Rendezvous of scouts along Indian war path from Muskingum Valley into Virginia. Near by are buried Captain Baker, John Wetzel, and others killed by Indians in 1787.

Topics and series. This historical marker is listed in these topic lists: Forts and Castles • Native Americans • Wars, US Indian. In addition, it is included in the West Virginia Archives and History series list. A significant historical year for this entry is 1784.

Location. Marker has been reported missing. It was located near 39° 48.178′ N, 80° 49.085′ W. Marker was near Proctor, West Virginia, in Marshall County. Marker was on West Virginia Route 2 south of Woodland and Graysville Road (County Route 27), on the left when traveling south. This historic marker is located along the side of the highway, opposite the Ohio River, a short distance south of where the highway crosses Fish Creek. Touch for map. Marker was in this post office area: Proctor WV 26055, United States of America. Touch for directions.

Other nearby markers. At least 8 other markers are within 6 miles of this location, measured as the crow flies. Zachary Taylor (a few steps from this 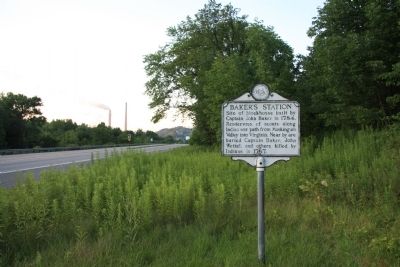 Also see . . .  Generation One of the John Baker Family. This is a link to information on the Baker Family that also provides additional information on Baker's Station. (Submitted on April 24, 2012, by Dale K. Benington of Toledo, Ohio.)

Additional commentary.
1. Too bad it’s missing. It’s the only one I wanted to see.
This marker is pretty significant to me since it tied together the two sides of my family which I would never have known without this marker. Incredibly, John Baker is my ancestor on my mother's side, John Wetzel is my ancestor on my father's side.

It's not well written and could portray what happened better, 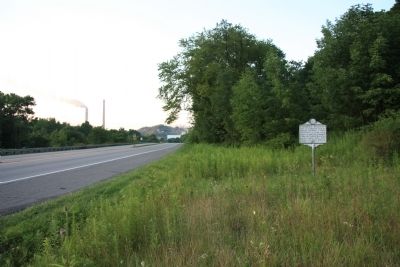 Photographed By Dale K. Benington, July 15, 2011
3. Baker's Station Marker
A more distant view of the historic marker looking north along state route 2.
and name the tribe of people rather than just call them "Indians". But even poorly done, they remind people of the history of the land and the country, and can drive you to research what the real facts are, and to remind us who was there before.
— Submitted December 27, 2021. 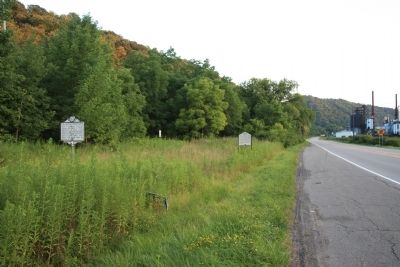