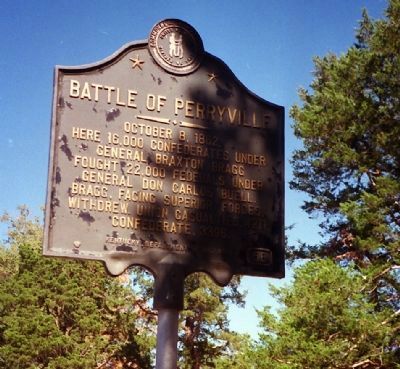 Location. This marker has been replaced by another marker nearby. It was located near 37° 40.464′ N, 84° 58.101′ W. Marker was near Perryville, Kentucky, in Boyle County. Marker was on Park Road 0.1 miles west of Battlefield Road (State Route 1920), on the left when traveling west. The marker was located at a small parking pull-off with one or two picnic tables nearby. Touch for map. Marker was in this post office area: Perryville KY 40468, United States of America. Touch for directions.

More about this marker. This marker has been refurbished and relocated several times over the last 28 years. Kentucky marker #58 was originally located in the town of Perryville. At some point it was moved to the Perryville Battlefield State Park. In 2013 this marker was again relocated to its current position between the town and the park.