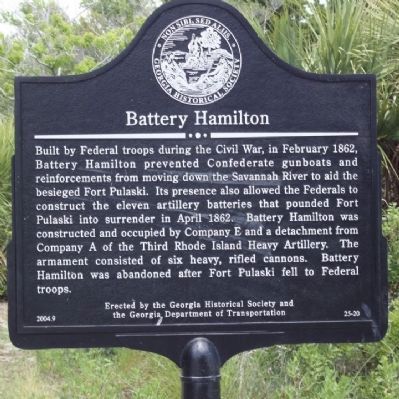 Built by Federal troops during the Civil War, in February 1862, Battery Hamilton prevented Confederate gunboats and reinforcements from moving down the Savannah River to aid the besieged Fort Pulaski. Its presence also allowed the Federals to construct the eleven artillery batteries that pounded Fort Pulaski into surrender in April 1862. Battery Hamilton was constructed and occupied by Company E and a detachment from Company A of the Third Rhode Island Heavy Artillery. The armament consisted of six heavy, rifled cannons. Battery Hamilton was abandoned after Fort Pulaski fell to Federal troops.

Topics and series. This historical marker is listed in these topic lists: Forts and Castles • War, US Civil. In addition, it is included in the Georgia Historical Society series list. 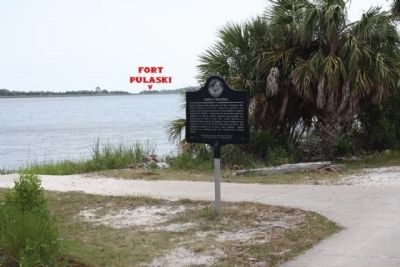 By Mike Stroud, May 3, 2009
2. Battery Hamilton Marker, with Fort Pulaski in distance
from Islands Expressway (U.S. 80), on the left when traveling east. On the McQueen's Island Hiking Trail, just east of the parking area on US 80. Touch for map. Marker is in this post office area: Tybee Island GA 31328, United States of America. Touch for directions.

Also see . . .
1. National Park Service,site of Battery Hamilton. was first visited by archeologists in 1999, and in 2002 was studied in more detail. The earthworks, originally about five feet high, have been greatly reduced by tidal action and gravity--they were constructed of waterlogged marsh mud. (Submitted on May 15, 2009, by Mike Stroud of Bluffton, South Carolina.)