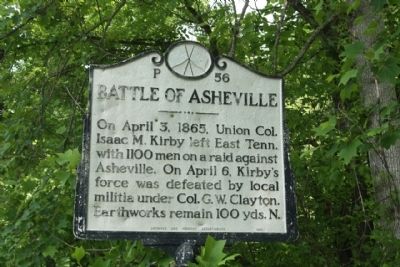 Photographed By Mike Stroud, May 19, 2012
1. Battle of Asheville Marker
Inscription.
Battle of Asheville. . On April 3, 1865, Union Col. Isaac M. Kirby left East Tenn. with 1100 men on a raid against Asheville. On April 6, Kirby's force was defeated by local militia under Col. G. W. Clayton. Earthworks remain 100 yds. N. . This historical marker was erected in 1962 by Archives and Highway Departments. It is in Asheville in Buncombe County North Carolina

Topics and series. This historical marker is listed in this topic list: War, US Civil. In addition, it is included in the North Carolina Division of Archives and History series list. A significant historical date for this entry is April 3, 1865.

Location. 35° 36.795′ N, 82° 34.181′ W. Marker is in Asheville, North Carolina, in Buncombe County. Marker is on Broadway (State Highway 1781), on the right when traveling north. Located near the Broadway Street entrance to UNC Asheville Campus. Touch for map. Marker is in this post office area: Asheville NC 28801, United States of America. Touch for directions. 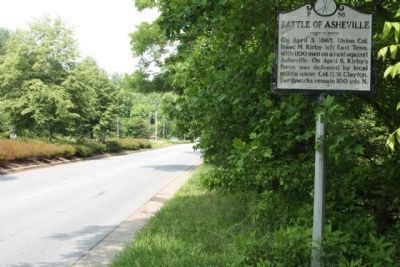 Photographed By Mike Stroud, May 19, 2012
2. Battle of Asheville Marker, looking northbound along Broadway

Regarding Battle of Asheville. Colonel Isaac M. Kirby of the 101st Ohio Infantry was ordered to “scout in the direction of Asheville.” He set out from Greeneville, Tennessee, with 900 troops and an estimated 200 partisans and Confederate deserters who had taken an oath of allegiance to the United States. After camping at Warm Springs on the first night, Kirby decided to leave the cannons and wagons there under heavy guard and proceed toward Asheville with only the infantry. His men burned two bridges on the approach.


With word of their approach, Colonel George W. Clayton, Asheville’s highest-ranking officer at the time, called upon the Home Guard to defend the city. The forty-four member “Silver Grays,” who counted among their ranks a 14 year old boy and a 60 year old Baptist minister, were bolstered by about 250 more men that Clayton “bullied, 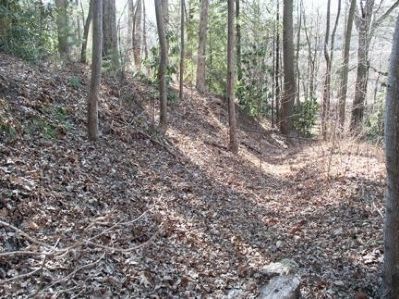 North Carolina Office of Archives & History — Department of Cultural Resource
3. Battle of Asheville earthworks
argued, or shamed” into taking up arms to defend Asheville. Clayton gathered the men and two small brass Napoleon cannons and marched them to rough earthworks that overlooked the French Broad route being used by Kirby’s men. When the two forces met at 3 o’clock in the afternoon, they simply lined up and began firing. There was no maneuvering, but gunfire, peppered with a few cannon blasts, continued for about five hours.


Kirby’s men retreated recklessly along the same route they had used for the approach, leaving items such as rifles, canteens, and haversacks in their wake. Kirby’s accounts of the events demonstrate that he was ill-informed as to the strength and numbers of his opponents. Reports of casualties vary from zero to three, but it is said that the following morning the Confederates inspected Kirby’s abandoned position and found one Union soldier’s leg in a boot. Aside from a few entries in the Official Records of the War of the Rebellion, the only details that have survived were related by Forster A. Sondley, who wrote a history of Buncombe County and who also had his Shetland pony stolen and later shot by Kirby’s troops on the way to the engagement.


The site of the breastworks is now part of the campus of the University of North Carolina at Asheville. A controversy still teems in and around Asheville—was the encounter of April 3, 1865, a battle, a skirmish, or an engagement? Placed in context, and with what little is known about the event, the best evidence (contrary to the wording at the head of the marker) would indicate that it fell well short of a battle but is rather more properly seen as an engagement. (North Carolina Office of Archives & History — Department of Cultural Resource)