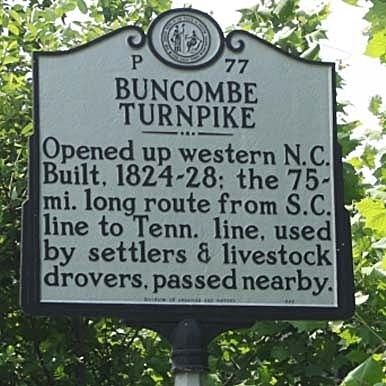 Photographed By Mike Stroud, May 19, 2012
1. Buncombe Turnpike Marker
Inscription.
Buncombe Turnpike. . Opened up western N.C. Built, 1824-28; the 75-mi. long route from S.C. line to Tenn. line, used by settlers and livestock drovers, passed nearby. . This historical marker was erected in 1993 by Division of Archives and History. It is in Asheville in Buncombe County North Carolina

Erected 1993 by Division of Archives and History. (Marker Number P-77.)

Topics and series. This historical marker is listed in this topic list: Roads & Vehicles. In addition, it is included in the North Carolina Division of Archives and History series list. 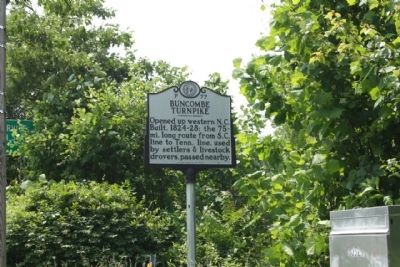 Regarding Buncombe Turnpike. David L. Swain, Buncombe County legislator, in 1824 sponsored a bill “for the purpose of laying out and making a turnpike road from the Saluda Gap . . . by the way of . . . Warm Springs to the Tennessee line.” Three Asheville men, James Patton, Samuel Chunn, and George Swain, were authorized to sell $50,000 of stock in the company. The collection of tolls would further finance the project. Sources conflict as to whether the Buncombe Turnpike, seventy-five miles in length, was completed in 1827 or 1828. There is general agreement that the portion through Asheville was finished by 1827; given the difficulties involved, is seems reasonable to conclude that final work took a year longer.

Forster A. Sondley in 1930 traced the path taken by the turnpike. South of Asheville it followed the same course as US 25 Business through Flat Rock and Hendersonville. In south Asheville the route ran up 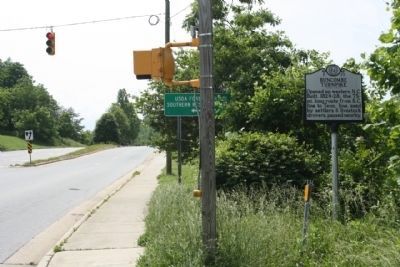 Photographed By Mike Stroud, May 19, 2012
3. Buncombe Turnpike Marker looking south along Broadway
a ridge to the Biltmore School building past Saint Joseph’s Hospital to Pack Square. It then followed the east bank of the French Broad River across Beaver Dam, Reems, Flat, Ivy, and Laurel Creeks to Paint Rock and the Tennessee line. Well constructed and maintained, the highway was said to be the finest of its day in North Carolina.

The effect of the Buncombe Turnpike on western North Carolina commerce and development was striking. The mountain region, long isolated, was opened to settlement. Stagecoaches and mail delivery established regular routes. The resort business began to flourish. Other roads developed to feed into the turnpike. Fowl and livestock were driven to markets in Charleston and Augusta via the Buncombe Turnpike. Planting of corn increased to feed the large droves. In 1849 William A. Lenoir spent the night in an inn south of Asheville with, he wrote, 5,000 hogs and seventy-five people. By 1850 the heavy animal traffic had necessitated repairs and sections were converted into plank roads. In the postwar period the railroad, following much the same route from South Carolina to Tennessee, supplanted the turnpike as the principal commercial transportation artery.(North Carolina Dept. of Cultural Resources)
Credits. This page was last revised on June 22, 2021. It was originally submitted on May 21, 2012, by Mike Stroud of Bluffton, South Carolina. This page has been viewed 924 times since then and 44 times this year. Photos:   1, 2, 3. submitted on May 24, 2012, by Mike Stroud of Bluffton, South Carolina.
Share this page.