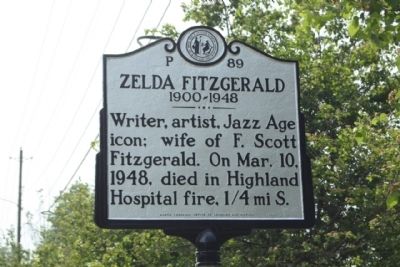 Topics and series. This historical marker is listed in these topic lists: Arts, Letters, Music • Women. In addition, it is included in the North Carolina Division of Archives and History series list. A significant historical month for this entry is March 1927.

Location. 35° 36.665′ N, 82° 33.981′ W. Marker is in Asheville, North Carolina, in Buncombe County. Marker is at the intersection of Broadway (State Highway 1791) and WT Weaver Blvd, on the right when traveling south on Broadway. Touch for map. Marker is in this post office area: Asheville NC 28801, United States of America. Touch for directions. 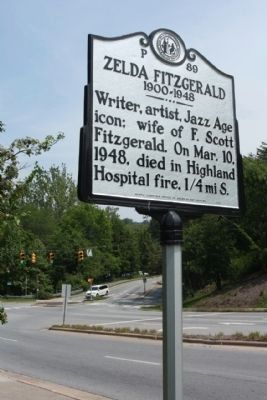 Regarding Zelda Fitzgerald. “So we beat on, boats against the current, borne back ceaselessly into the past.” The lines from The Great Gatsby are inscribed atop the burials in Rockville, Maryland, of F. Scott Fitzgerald and his wife Zelda. In their day celebrities of the first order, they spent much of the 1930s in western North Carolina. She outlived him by eight years.

Daughter of an Alabama State Supreme Court justice, Zelda Sayre married Fitzgerald in 1919. The Great Gatsby appeared in 1925 and it was Fitzgerald himself who dubbed the 1920s the “Jazz Age.” Zelda, whom he called “America’s first flapper,” published a novel, Save the Last Waltz, in 1932. He was an alcoholic and, after 1936, she suffered from schizophrenia. To this day scholars debate the role each had in stifling the other’s creativity.

While staying at the Grove Park Inn in 1936, Zelda 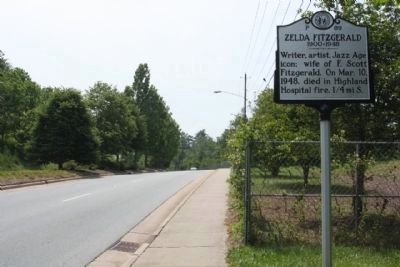 After her husband’s death in 1940, she returned to Highland Hospital for three extended stays, averaging six months. She swam, played tennis, went shopping, and regularly visited her mother in Alabama and at her summer home in Saluda. On March 10, 1948, fire swept from the facility’s kitchen through the dumbwaiter to all four floors. Of the twenty resident patients, nine perished. The others were led to safety. Fitzgerald, it is believed, likely died of
smoke inhalation but her remains were indentified by charred slippers. Reports conflict as to whether the doors were locked. 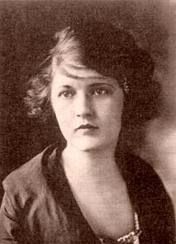 Photographed By Wikipedia
4. Zelda Fitzgerald
at a dance. A whirlwind courtship ensued. ... (Submitted on May 21, 2012, by Mike Stroud of Bluffton, South Carolina.) 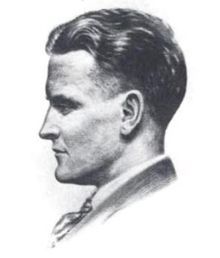 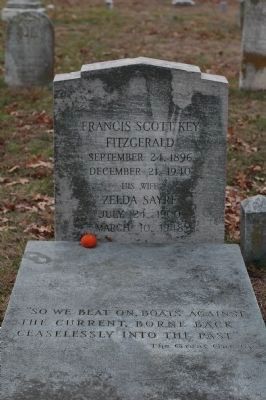 Photographed By Tom Fuchs, January 7, 2006
6. F. Scott Fitzgerald's and His Wife Zelda's Gravestones, St. Mary's Church, Rockville. Md.
“So we beat on, boats against the current, borne back ceaselessly into the past.” — The Great Gatsby. 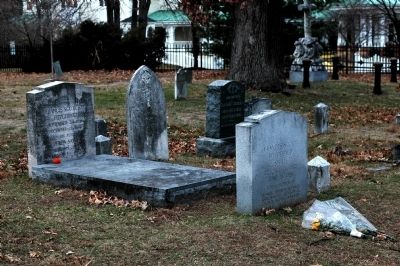