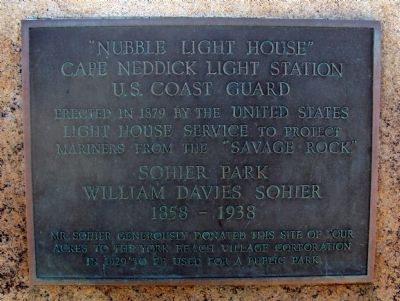 Erected in 1879 by the United States Light House Service to protect mariners from the "Savage Rock."
Sohier Park
William Davies Sohier
1858-1938
Mr. Sohier generously donated this site of four acres to the York Beach Village Corporation in 1929 to be used for a public park.

Topics and series. This historical marker is listed in these topic lists: Communications • Waterways & Vessels. In addition, it is included in the Lighthouses series list. A significant historical year for this entry is 1879.

Other nearby markers. At least 8 other markers are within 9 miles of this marker, measured as the crow flies. "Beware The Savage Rocks" (about 300 feet away, measured in a direct line); Historic York Then and Now (approx. 3.3 miles away); Sewall's Bridge (approx. 3.9 miles away); Federal Highway Administration Murrah Building Memorial 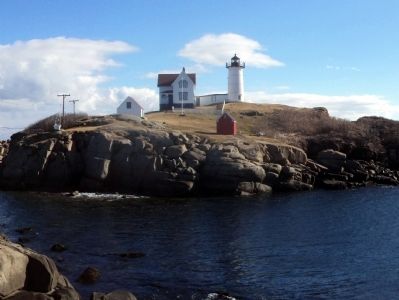 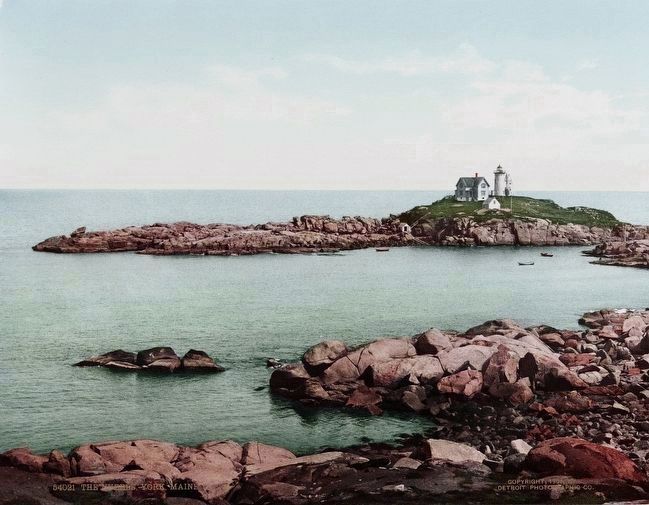 Photochrom postcard by the Detroit Photographic Company, 1901
3. The Nubble, York, Maine
In 1874 President Rutherford B. Hayes appropriated the sum of $15,000 to build a lighthouse on this “Nub” of land. On July 1, 1879 construction was completed on what, at the time, was known as the Knubble Lighthouse with a 4th order light began to protect our men and women on the sea. The men and women serving in the Lighthouse Service were the first guardians who provided great care for the light and its surrounding buildings....Once the Lighthouse Service completed their work, the United States government transferred this valuable service to the U.S. Coast Guard in 1939. They gave Nubble Light the official name of Cape Neddick Lightstation. The Coast Guard and their families were wonderful caretakers of our Maine Lighthouses. Eventually this service became short of resources and funding to care for our majestic beacons. Because of this in part, as well as the growing development of technology, the Lighthouses became automated. Nubble Light was automated in July, 1987....-Nubblelight.org
Credits. This page was last revised on September 24, 2020. It was originally submitted on May 22, 2012, by Matt Gilbertson of Medford, Massachusetts. This page has been viewed 556 times since then and 31 times this year. Photos:   1, 2. submitted on May 22, 2012, by Matt Gilbertson of Medford, Massachusetts.   3. submitted on August 29, 2015. • Bill Pfingsten was the editor who published this page.
Share this page.