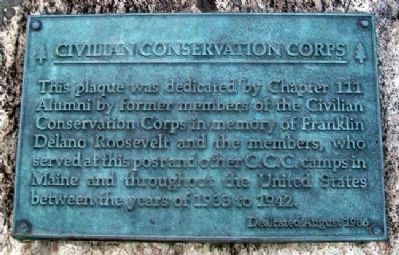 This plaque was dedicated by Chapter 111 Alumni by former members of the Civilian Conservation Corps in memory of Franklin Delano Roosevelt and the members, who served at this post and other C.C.C. camps in Maine and throughout the United States between the years of 1933 to 1942.

Topics and series. This historical marker is listed in these topic lists: Charity & Public Work • Education • Environment. In addition, it is included in the Civilian Conservation Corps (CCC), and the Former U.S. Presidents: #32 Franklin D. Roosevelt series lists. A significant historical year for this entry is 1933.

Location. 43° 38.824′ N, 70° 13.623′ W. Marker is in South Portland, Maine, in Cumberland County. Marker is along the Spring Point Shoreway Trail, about 150 feet south of the Computer and Electronics Center on the Southern Maine Community College campus. Touch for map. Marker is in this post office area: South Portland ME 04106, United States of America. Touch for directions.

Other nearby markers. At least 8 other markers are within walking distance of this marker. Early Settlement (about 500 feet away, measured in a direct line); Shipbuilding 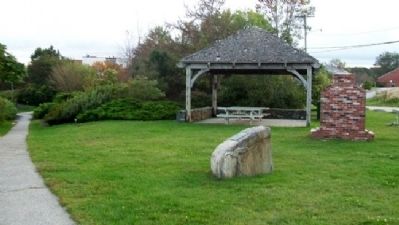