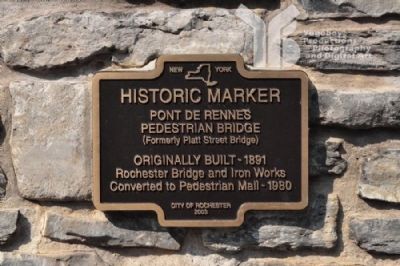 Erected 2003 by City of Rochester.

Topics. This historical marker is listed in these topic lists: Bridges & Viaducts • Industry & Commerce • Man-Made Features • Waterways & Vessels. A significant historical year for this entry is 1891.

Location. 43° 9.69′ N, 77° 37.007′ W. Marker is in Rochester, New York, in Monroe County. Marker can be reached from Platt St. Marker is a few yards east of the end of Platt St on a wall next to the entrance to the Pont de Rennes Bridge. Touch for map. Marker is in this post office area: Rochester NY 14614, United States of America. Touch for directions. 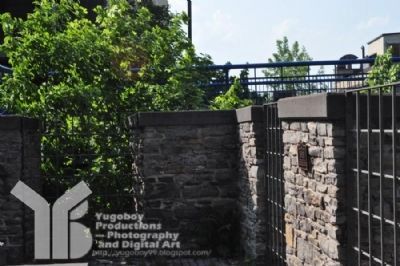 By Yugoboy, May 25, 2012
2. Historic Marker Marker
The blue railing visible above the wall is the Pont de Rennes Bridge.

More about this marker. This marker is the only "Historic Marker" in the High Falls District. This is far from the only informative marker in the area. This may be the LEAST informative marker in the area, in fact. Each building in the High Falls District has its own marker detailing the history of Rochester, NY's early industrial history. Brown's Race, the source of much of Rochester's early power still runs under the south end of the road.

Regarding Pont de Rennes Pedestrian Bridge. If you get to visit this area, be sure to take the short stroll on the bridge itself. Rochester's High Falls are pretty spectacular. If you've got the time, a walking tour of this whole area is time well spent. Above the falls themselves there are the remains of one of Rochester's early factories, from which you can see the top of the falls. 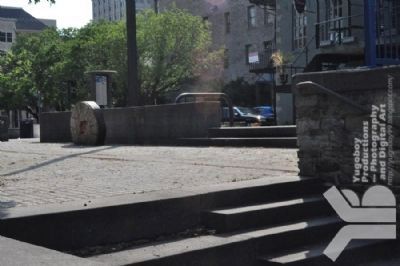 By Yugoboy, May 25, 2012
3. Historic Marker Marker
Facing Northwest from the marker. 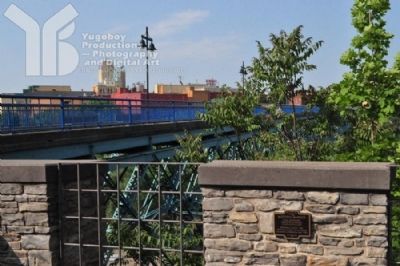