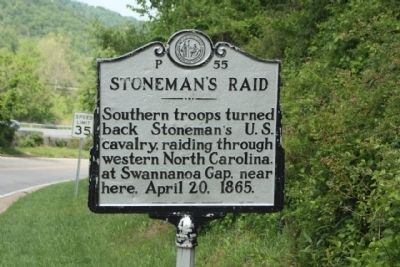 Photographed By Mike Stroud, May 19, 2012
1. Stoneman's Raid Marker
Inscription.
Stoneman's Raid. . Southern troops turned back Stoneman's U.S. cavalry, raiding through western North Carolina, at Swannanoa Gap, near here, April 20, 1865. . This historical marker was erected in 1968 by Archives and Highway Departments. It is in Ridgecrest in Buncombe County North Carolina

Topics and series. This historical marker is listed in this topic list: War, US Civil. In addition, it is included in the North Carolina Division of Archives and History series list. A significant historical month for this entry is April 1840. 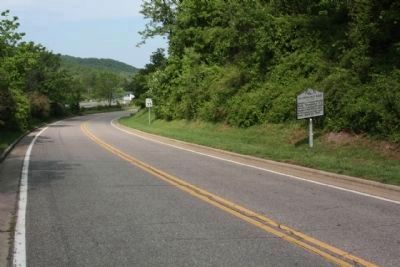 Regarding Stoneman's Raid. In late March 1865, Union cavalry under Major General George Stoneman, commander of the Union army “District of East Tennessee,” marched throughout western North Carolina during one of the longest cavalry raids in history. About 5,000 men under Stoneman’s command entered North Carolina with a mission “to destroy and not to fight battles” in order to expedite the close of the Civil War. Stoneman’s raid coincided with the raids of General William T. Sherman in the eastern sections of the state, stretching local home guard and militia units thinly across the state and forcing Confederate commanders to make hard choices on where their men were needed most.

Stoneman divided his men and sent detachments throughout the region, securing the destruction of the region’s factories, bridges and railroad lines. The army relied heavily on local citizens for food and supplies, often emptying storehouses. Stoneman’s raids in North Carolina lasted from late March until May when they assisted 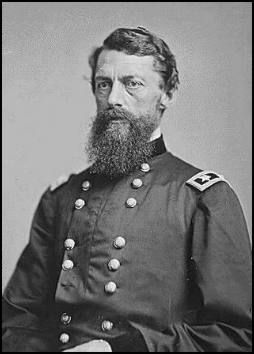 Library of Congress
3. Major General George Stoneman
in the search for Confederate President Jefferson Davis as he fled the collapsed Confederacy. The men had marched more than 1,000 miles during the raid and historians credit their march with assuring the death of the Confederacy as they captured artillery pieces and took thousands of prisoners while destroying Confederate army supplies and blocking a line of possible retreat for both Lee and Johnston’s armies.

After hearing rumors of the end of the war, Stoneman’s men remaining in North Carolina under the command of General A. C. Gillem marched toward Asheville. The Union forces reached the Swannanoa Gap on April 20th after a successful raid on Morganton. At the gap, they were met by a blockade of 500 Confederates and artillery. Gillem, aware that the Confederates were in a good defensive position, ordered his men to deceive the Confederates as some men maintained the guise of a frontal assault while others flanked the Confederate position. Because of the mountainous environment, the flanking movement was a wide march that took Gillem and his men into Rutherfordton, forty miles south of the Swannanoa Gap, on April 21. The flanking movement effectively placed Gillem and his men in the heart of the Confederate backcountry.(North Carolina Dept. of Cultural Resources)