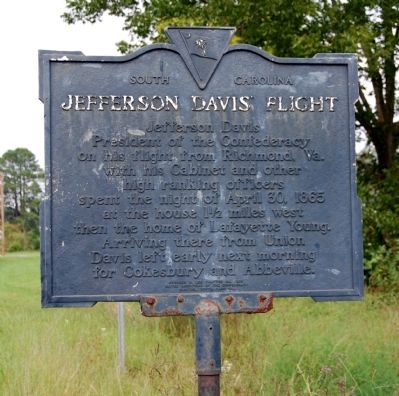 By Brian Scott, September 27, 2008
1. Jefferson Davis Flight Marker
Inscription.
Jefferson Davis Flight. . . Jefferson Davis, President of the Confederacy on his flight from Richmond, Va. with his Cabinet and other high ranking officers spent the night of April 30, 1865 at the house 1½ miles west, then the home of Lafayette Young. Arriving there from Union, Davis left early the next morning for Cokesbury and Abbeville. . This historical marker was erected in 1961 by Stephen D. Lee Chapter No. 1066 United Daughters of the Confederacy, Clinton, South Carolina. It is Near Joanna in Laurens County South Carolina

Jefferson Davis, President of the Confederacy on his flight from Richmond, Va. with his Cabinet and other high ranking officers spent the night of April 30, 1865 at the house 1½ miles west, then the home of Lafayette Young. Arriving there from Union, Davis left early the next morning for Cokesbury and Abbeville.

Topics and series. This historical marker is listed in these topic lists: Government & Politics • Military • Notable Places • War, US Civil. In addition, it is included in the United Daughters of the Confederacy series list. 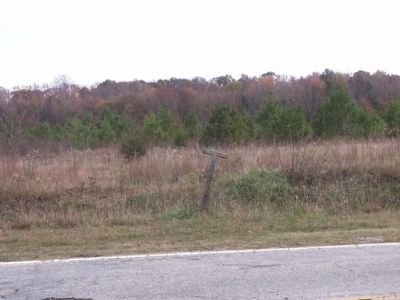 Related markers. Click here for a list of markers that are related to this marker. Markers tracing Davis's flight, arrest, and imprisonment.

Also see . . .
1. Jefferson Davis. Jefferson Finis Davis (June 3, 1808 – December 6, 1889) was an American politician who served as President of the Confederate States of America for its entire history from 1861 to 1865 during the American Civil War. (Submitted on October 2, 2008, by Brian Scott of Anderson, South Carolina.)

2. Capture of Jefferson Davis. In early May 1865 the Confederate States of America was greatly disorganized, largely because of the frenetic events of the previous month. (Submitted on October 2, 2008, by Brian Scott of Anderson, South Carolina.) 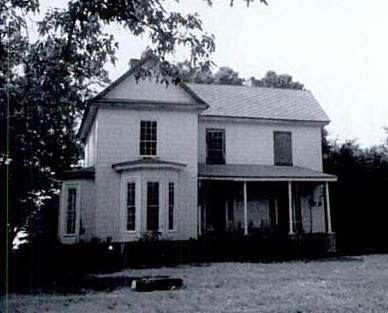 Clinton by Sam Owens
3. Lafayette Young House - Located on Old Milton Road
. While attending St. Pauls Church in Richmond, VA on April 2nd 1865, Jefferson Davis received a message from General Lee telling him he had to evacuate the Confederate capital immediately because the Confederate troops were being forced to abandon their defense of Petersburg. (Submitted on October 4, 2009, by Brian Scott of Anderson, South Carolina.)

4. The Capture of Jefferson Davis. Our regiment was stationed in and around Macon and in the early part of May it was learned that Jefferson Davis, President of the Confederate States, was fleeing for Texas to join General Kirby Smith, there to try and re-establish the Confederacy. (Submitted on October 4, 2009, by Brian Scott of Anderson, South Carolina.)

5. The True Story Of The Capture Of Jefferson Davis by Major W. T. Walthall, (Late A.A.G., Confederate. The publication, in the Philadelphia Weekly Times of July 7th, 1877, of an article by Major General James H. Wilson, professing to give an account of the capture of the Confederate President in 1865, has not only revived a fictitious story circulated soon after that event occurred -- perhaps still current among the vulgar, though long since refuted -- but has surrounded it with a cluster of new embellishments, which had heretofore been either "unwritten history" or unimagined fiction. (Submitted on October 4, 2009, by Brian Scott of Anderson, South Carolina.) 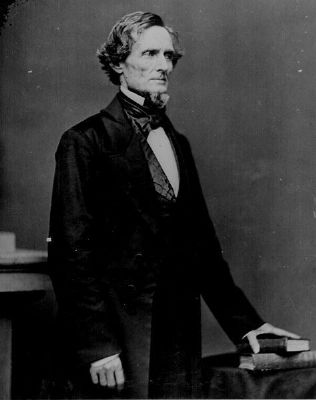 
Additional comments.
1. Jefferson Davis
Davis, Jefferson, (son-in-law of President Zachary Taylor), a Representative and a Senator from Mississippi; born in what is now Fairview, Todd County, Ky., June 3, 1808; moved with his parents to a plantation near Woodville, Wilkinson County, Miss.; attended the country schools, St. Thomas College, Washington County, Ky., Jefferson College, Adams County, Miss., Wilkinson County Academy, and Transylvania University, Lexington, Ky.; graduated from the United States Military Academy, West Point, N.Y., in 1828; served in the Black Hawk War in 1832; promoted to the rank of first lieutenant in the First Dragoons in 1833, and served until 1835, when he resigned; moved to his plantation, ‘Brierfield,’ in Warren County, Miss., and engaged in cotton planting; elected as a Democrat to the Twenty-ninth Congress and served from March 4, 1845, until June 1846, when he resigned to command the First Regiment of Mississippi Riflemen in the war with Mexico; appointed to the United States Senate to fill the vacancy caused by the death of Jesse Speight; subsequently elected and served from August 10, 1847, until September 23, 1851, when he resigned; chairman, Committee on Military Affairs (Thirtieth through Thirty-second Congresses); unsuccessful candidate for Governor in 1851; appointed Secretary of War by President Franklin Pierce 1853-1857; again elected as a Democrat to the United States Senate and served from March 4, 1857, until January 21, 1861, when he withdrew with other secessionist Senators; chairman, Committee on Military Affairs and the Militia (Thirty-fifth and Thirty-sixth Congresses); commissioned major general of the State militia in January 1861; chosen President of the Confederacy by the Provisional Congress and inaugurated in Montgomery, Ala., February 18, 1861; elected President of the Confederacy for a term of six years and inaugurated in Richmond, Va., February 22, 1862; captured by Union troops in Irwinsville, Ga., May 10, 1865; imprisoned in Fortress Monroe, indicted for treason, and was paroled in the custody of the court in 1867; returned to Mississippi and spent the remaining years of his life writing; died in New Orleans, La., on December 6, 1889; interment in Metairie Cemetery, New Orleans, La.; reinterment on May 31, 1893, in Hollywood Cemetery, Richmond, Va.; the legal disabilities placed upon him were removed, and he was posthumously restored to the full rights of citizenship, effective December 25, 1868, pursuant to a Joint Resolution of Congress (Public Law 95-466), approved October 17, 1978. (Source: Biographical Directory of the U.S. Congress.)
— Submitted October 4, 2009, by Brian Scott of Anderson, South Carolina.
2. Timeline of Jefferson Davis' Flight and Capture
April 2, 1865: Jefferson Davis and members of his cabinet left Richmond by train, bound for Danville, Virginia.

April 18, 1865: Jefferson Davis and party arrive in Charlotte, North Carolina. It was on this date that Davis learned of Lincoln's assassination.

April 30, 1865: Jefferson Davis spends the night in the Lafayette Young Home in Laurens County, South Carolina (the subject of this marker).

May 1, 1865: Jefferson Davis spent the night in Cokesbury at the home of Mrs. Thomas Reeder Gary, whose son, Confederate General Martin W. Gary, was in Davis' military escort.

May 2, 1865: Confederate Cabinet met for the final time at the home of Armistead Burt in Abbeville, South Carolina. He comes to the realization that the Confederate cause is over.

May 3, 1865: Jefferson Davis left Abbeville, traveling via the current SC Highway 823 and crossing the Savannah River into Georgia near the site of Fort Charlotte.

May 9, 1865: Jefferson Davis and party set up a tent camp a fifth of a mile north of Irwinville, Georgia.

May 10, 1865: Jefferson Davis is taken prisoner at Irwinville, Georgia.