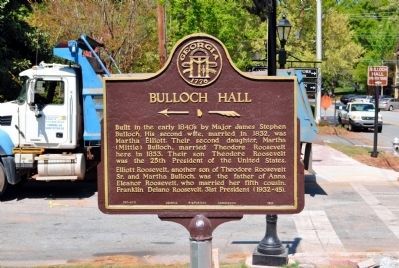 Photographed By David Seibert, March 27, 2012
1. Bulloch Hall Marker
In its new location
Inscription.
Bulloch Hall. . Built in the early 1840's by Major James Stephen Bulloch. His second wife, married in 1832, was Martha Elliott. Their second daughter, Martha (Mittie) Bulloch and Theodore Roosevelt married here in 1853. Their son Theodore Roosevelt was the 25th President of the United States., Elliott Roosevelt, another son of Theodore Roosevelt Sr. and Martha Bulloch, was the father of Anna Eleanor Roosevelt, who married her fifth cousin, Franklin Delano Roosevelt, 31st President (1932-45). . This historical marker was erected in 1953 by Georgia Historical Commission. It is in Roswell in Fulton County Georgia

Built in the early 1840's by Major James Stephen Bulloch. His second wife, married in 1832, was Martha Elliott. Their second daughter, Martha (Mittie) Bulloch and Theodore Roosevelt married here in 1853. Their son Theodore Roosevelt was the 25th President of the United States. 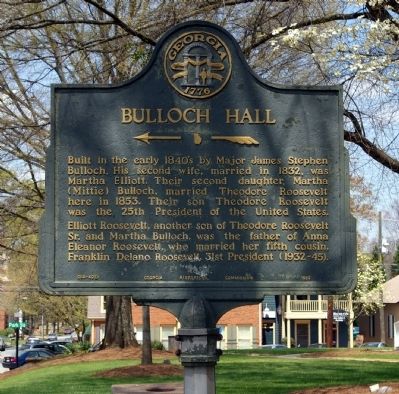 Click or scan to see
this page online
of Mimosa Boulevard and Bulloch Avenue, on the left when traveling north on Mimosa Boulevard. Touch for map. Marker is in this post office area: Roswell GA 30075, United States of America. Touch for directions.

Additional commentary.
1. A History of Bulloch Hall
As abridged from RoadsideGeorgia.Com's web page on Bulloch Hall:

"Starting in 1839, James Bulloch built a Classic Greek Revival mansion west of the Chattahoochee just off the town square. Unlike most of the homes in north Georgia, Bulloch Hall was built by slave labor. The mansion was completed in 1840 and immediately occupied 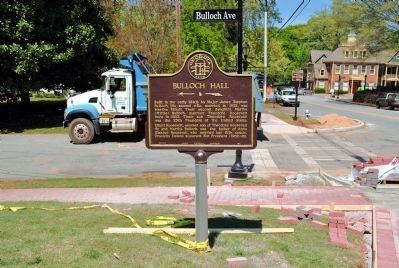 Photographed By David Seibert, March 27, 2012
3. Bulloch Hall Marker
Looking north: Mimosa Boulevard is to the right and Bulloch Avenue in the foreground.
by the major, his wife and their children, including Martha (Mittie) and a newborn, Charles, who would sadly become the first person to die in Roswell (1840).

Early in 1851 a 19-year-old Theodore Roosevelt (father of the future president) visited Bulloch Hall, where he met young Mittie Bulloch. Two years later, when Mittie journeyed to Philadelphia, Roosevelt met her again. This time he fell in love. On December 22, 1853, Mittie and Theodore were married in the dining room of Bulloch Hall.

In 1864, war came to Roswell. The mills that had been the heart of Roswell's growth were destroyed, and Bulloch Hall was seized by the Union Army as quarters. The Bullochs who had not enlisted fled. Mittie returned to house in 1868, and the current owner permitted her to take a remembrance. Mittie chose her mother's cherished glass doorknob. In 1905 Martha's grandson Theodore Roosevelt (Jr.), then President of the United States, visited the house where his mother grew up. Martha Bulloch's other grandson, Elliot, was father to Eleanor Roosevelt, wife of Franklin Delano Roosevelt. Over the years the home passed through various hands, finally bought by the city of Roswell in 1977.

Bulloch Hall has seen its share of captains and kings come to visit, and not just Theodore Roosevelt and the Union Army. Eleanor Roosevelt visited from time to time, and Margaret Mitchell may 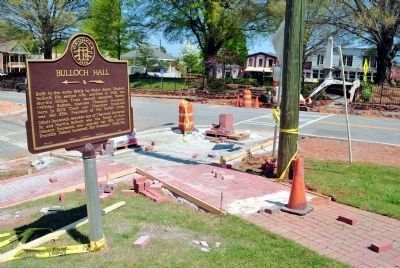 Photographed By David Seibert, March 27, 2012
4. Bulloch Hall Marker
Looking east across Mimosa Boulevard at the original site of the marker (where the white excavator is sitting).
have visited the home and used it to inspire Tara, Scarlett O'Hara's plantation in Gone With The Wind." Note To Editor only visible by Contributor and editor
— Submitted August 6, 2008. 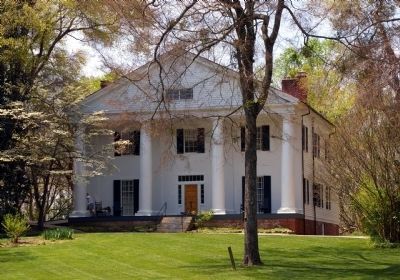 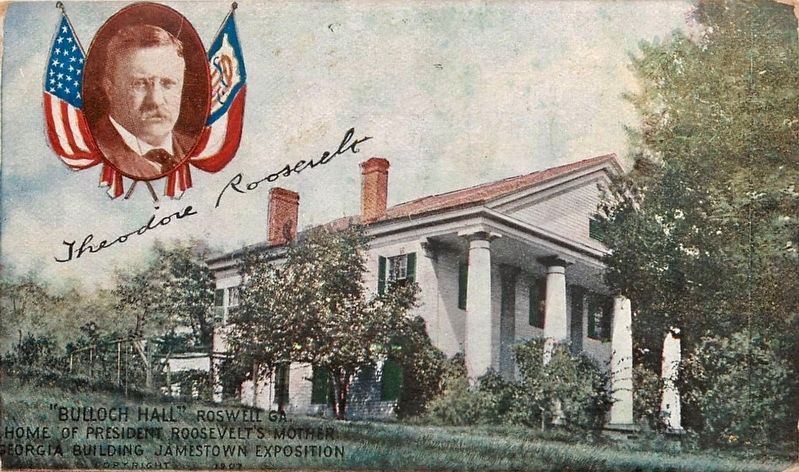