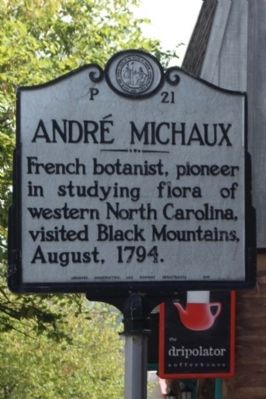 Topics and series. This historical marker is listed in these topic lists: Agriculture • Environment • Horticulture & Forestry. In addition, it is included in the North Carolina Division of Archives and History series list. A significant historical year for this entry is 1794. 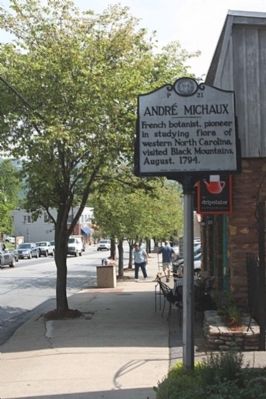 Regarding André Michaux. André Michaux, botanist, explorer, and author, was born at Satory, near Versailles, France, on March 7, 1746, the son of a landlord of a royal estate. In 1769, after the death of his first wife, Cecil Claye, Michaux chose to devote his life to botanical study. A student of French naturalist Bernard de Juisseau, Michaux spent 1779-1781 studying in England, as well as in the Auvergne Mountains in France and the Pyrenees in Spain. In 1782 he received a commission by the French government to obtain a herbarium in Persia.

Three years after returning from Persia, Michaux was sent by Louis XVI to North America to study trees and ascertain their quality for naval construction. Working with his fifteen-year-old son, Michaux set up a nursery in New Jersey. He worked collecting specimens in New Jersey, Pennsylvania, and Maryland for nearly a year before moving his collection to Charleston, South Carolina.

In late 1787 Michaux made the first 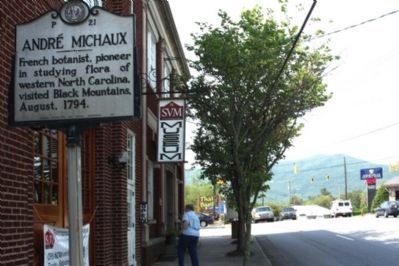 Photographed By Mike Stroud, May 19, 2012
3. André Michaux Marker, westbound view along State Street
of five trips into the Appalachian Mountain range in search of plants and herbs. Following the route previously taken by William Bartram, Michaux entered North Carolina crossing the Georgia border and working his way along the French Broad River. He returned the following year, entering near Charlotte and following the Catawba River into Burke County, eventually crossing the Blue Ridge Mountains. For the next several years, Michaux visited Florida, the Bahamas, and Hudson Bay.

In 1793, the French government sent him to Kentucky and Tennessee, and he returned to North Carolina in 1794 and 1795. On the latter trips he passed through Lincoln and Burke Counties and moved along the Appalachian range, visiting Roan Mountain, Mount Mitchell and the Black Mountains, Grandfather Mountain, and Linville Gorge. According to his own journal, having reached the summit of Grandfather Mountain, he sang out the French hymn “La Marseillaise” and exclaimed “Long live America, and long live the French Republic!” His many travels through the North Carolina mountains resulted in spectacular finds, one of which, the rare Carolina Lily, Lilium Michauxii, was named North Carolina’s official state wild flower in 2003.

Another major find of Michaux’s, although not directly named by him, was the Oconee Bell, Shortia galacifolia. In 1839, while searching through Michaux’s collections in Paris, botanist Asa Gray found an unclassified specimen with a simple note stating it had been found “high in the mountains of Carolina.” For the next four decades, Gray and several other botanists searched in vain for the flower. In 1877 they were found in Oconee County, South Carolina, but subsequently small plots of the extremely rare flower have been found in the Appalachian Mountains.

The French Revolution deprived Michaux of his financial support. In August 1796 he left Charleston for France with an enormous collection of plants. Shipwrecked off Holland, Michaux saved most of his plants, but his journal of his North Carolina expedition was largely lost. In October 1800 he volunteered as the naturalist for an expedition headed to Australia, but left the group while on the island of Mauritania in the Indian Ocean. He remained there for six months, thoroughly enthralled by the plant and animal species. Michaux then moved his operations to Madagascar. In the fall of 1802 he became sick with fever, and died in November at the age of fifty-six.

Michaux wrote two books about his experiences, The History of North American Oaks, and Flora Boreali Americana. His son, Francois André Michaux, followed in his footsteps as a botanist and writer. In 1802-1803 he led an expedition across Ohio, Kentucky, Tennessee, and the Carolinas. He left an account of the venture, Travels to the West of the Alleghany Mountains. Although he spent little time in North Carolina, Michaux’s son left detailed descriptions of Morganton and Lincolnton. (North Carolina Dept. of Cultural Resources)

Related markers. Click here for a list of markers that are related to this marker. ...study each marker shown.

Also see . . .  André Michaux ; Compiled by Charlie Williams, Public Library of Charlotte and Mecklenburg County. Michaux's expeditions to the mountains of the Carolinas were especially fruitful. In this remote region he ascended many of the highest peaks. To reach the summits of Grandfather Mountain, Roan Mountain, the Black Mountains, the unique peaks of Table Rock and Hawksbill, and many other mountains the indomitable explorer followed his local guides on routes traveled only by hunters. He was well aware of his vulnerability, yet he pressed on. The lure of discovering new plants always drew him onward. Often he was rewarded with new species of rare beauty. Michaux was high in these mountains near the headwaters of the Catawba River when he discovered a magnificent new evergreen shrub with flowers that turned entire mountain peaks into vast oceans of purple blossoms. He named it Rhododendron catawbiense for the river whose waters he had followed to find this treasure. Today, this shrub is known not just for its beauty in the wild places where Michaux found it, but as one of the genetic parents of many of the beautiful hybrid rhododendrons found in gardens. (Submitted on June 7, 2012, by Mike Stroud of Bluffton, South Carolina.)
Credits. This page was last revised on June 22, 2021. It was originally submitted on June 7, 2012, by Mike Stroud of Bluffton, South Carolina. This page has been viewed 643 times since then and 40 times this year. Photos:   1, 2, 3. submitted on June 7, 2012, by Mike Stroud of Bluffton, South Carolina.
Share this page.