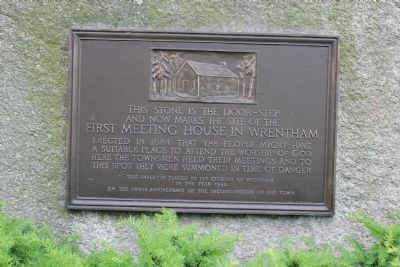 This stone is the door-step and now marks the site of the first Meeting House in Wrentham erected in 1684 that the people might have a suitable place to attend the worship of God. Here the townsmen held their meetings and to this spot they were summoned in time of danger

Erected 1923 by The Citizens of Wrentham.

Topics. This historical marker is listed in these topic lists: Churches & Religion • Colonial Era. A significant historical year for this entry is 1684.

Location. 42° 3.997′ N, 71° 19.666′ W. Marker is in Wrentham, Massachusetts, in Norfolk County. Marker is at the intersection of South St (U.S. 1A) and East Street, on the left when traveling south on South St. Touch for map. Marker is in this post office area: Wrentham MA 02093, United States of America. Touch for directions. 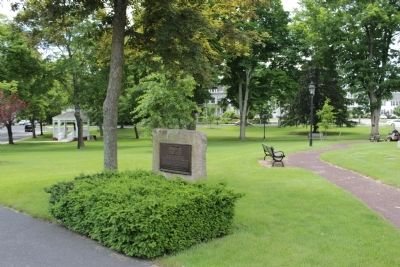