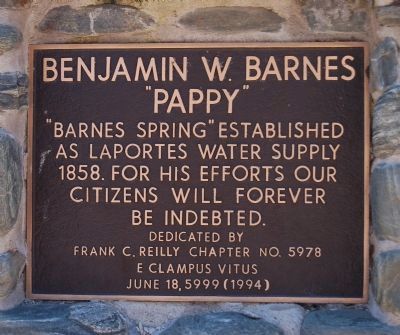 Photographed By Barry Swackhamer, May 29, 2012
1. Benjamin W. Barnes Marker
Inscription.
Benjamin W. Barnes. “Pappy”. “Barnes Spring” established as La Portes Water Supply 1858. For his efforts our citizens will forever by indebted. . This historical marker was erected in 1994 by E Clampus Vitus, Frank C. Reilly Chapter No. 5978. It is in La Porte in Plumas County California

“Barnes Spring” established as La Portes Water Supply 1858. For his efforts our citizens will forever by indebted.

Topics and series. This historical marker is listed in these topic lists: Settlements & Settlers • Waterways & Vessels. In addition, it is included in the E Clampus Vitus series list. A significant historical year for this entry is 1858.

Location. 39° 40.756′ N, 120° 58.997′ W. Marker is in La Porte, California, in Plumas County. Marker can be reached from Church Street. The marker is located in front of the La Porte Cemetery. Touch for map. Marker is at or near this postal address: 2060 Church Street, Strawberry Valley CA 95981, United States of America. Touch for directions. 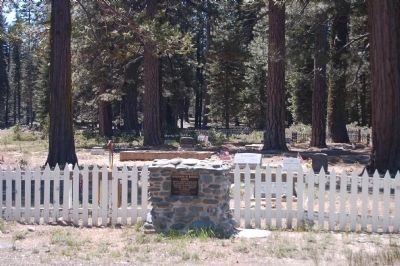 Regarding Benjamin W. Barnes. B.W. Barnes was a prominent member of the early La Porte community and was instrumental in bringing water to the town from a spring situated on Bald Mountain. The system has been updated and the old wooden pipes replaced by modern plastic but the water still flows over the same route as it did in 1868.
Mr. Barnes was buried in the cemetery after a Masonic funeral attended by friends from towns near La Porte. It was April and it was necessary to dig through 6 feet of snow and then the traditional 6 feet of earth to bury him.
His body was removed by his family in the 20’s and taken to Oregon (or so the story is told). We’re not sure why!
Source: Walking Tour of La Porte
Credits. This page was last revised on November 7, 2019. It was originally submitted on June 14, 2012, by Barry Swackhamer of Brentwood, California. This page has been viewed 386 times since then and 24 times this year. Photos:   1, 2. submitted on June 14, 2012, by Barry Swackhamer of Brentwood, California. • Syd Whittle was the editor who published this page.
Share this page.