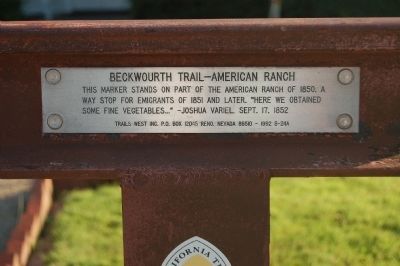 Topics and series. This historical marker is listed in this topic list: Roads & Vehicles. In addition, it is included in the Beckwourth Trail, the California Trail, and the Trails West Inc. series lists. A significant historical date for this entry is September 17, 1934. Regarding Beckwourth Trail – American Ranch. Trails West Inc., P.O. Box 12045 Reno, Nevada 89510, has placed over 50 markers on the Beckwourth Trail between Sparks, Nevada and Lake Oroville, California, 31 of which are located in Plumas County. They have also placed over 400 markers on the California, Applegate, Lassen and Nobles' Emigrant Trails.

Also see . . .
1. The Beckwourth Trail. Early in 1850, Jim Beckwourth was on a prospecting expedition in northern California. He and his companions had travelled north from American Valley (now Quincy) to the Pitt River. Nothing much came of the trip, except that Beckwourth saw a pass through the mountains "far away to the southward that seemed lower than any other." (Submitted on June 15, 2012, by Barry Swackhamer of Brentwood, California.) 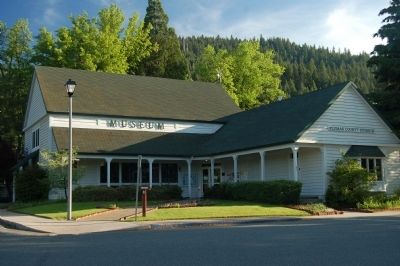