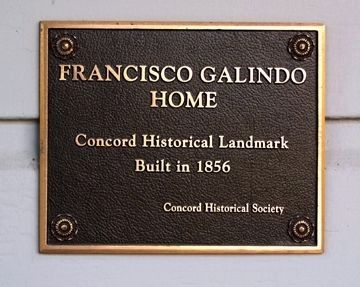 Topics. This historical marker is listed in these topic lists: Hispanic Americans • Notable Buildings • Settlements & Settlers. A significant historical year for this entry is 1856.

Location. 37° 58.403′ N, 122° 2.081′ W. Marker is in Concord, California, in Contra Costa County. Marker can be reached from Amador Avenue, on the right when traveling south. The house and marker are located at the intersection of Amador Avenue and Marina Avenue. Touch for map. Marker is at or near this postal address: 1721 Amador Avenue, Concord CA 94520, United States of America. Touch for directions.

More about this marker. The marker is located on the exterior wall on the east side of the Galindo home. 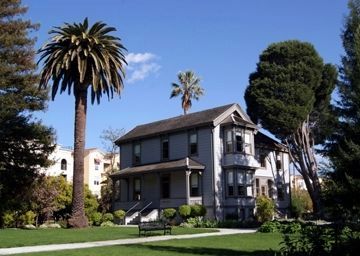 This house was built in 1856 for Don Francisco Galindo and his wife Maria Dolores Manuela, the second daughter of Don Salvio Pacheco. For a time it was one of the few Victorian ranch houses in Contra Costa County.

Salvio Pacheco was the original grantee of 17,921-acre Rancho Monte del Diablo, which included the area that is now Concord, California. Salvio and his son Fernando Pacheco together with son-in-law Francisco Galindo are considered the founders of Concord.

In 1880 Juan “John” Galindo, the oldest son of Francisco Galindo, moved into the home with his bride, “Sarah” (Amador). They enlarged it from six to ten rooms. After their eldest child Frederick married Catherine (Hittman) Galindo in 1911, title was transferred to this next generation. Following the death of Catherine Galindo in 1966, the house continued to be the home of her children, Harold, Ruth and Leonora. Ruth Galindo was the last direct descendant and resided in the home until her death in December 1999. Ruth deeded her home and property of approximately 1.5 acres to the City of Concord to be preserved as a house museum. In 2011 the Concord Historical Society assumed ownership of the home and began restoration with the goal of opening the home to the public in 2012.