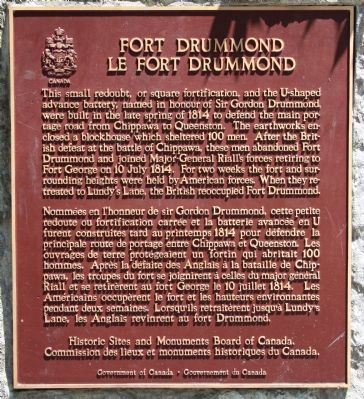 This small redoubt, or square fortification, and the U-shaped advance battery, named in honour of Sir Gordon Drummond, were built in the late spring of 1814 to defend the main portage road from Chippawa to Queenston. The earthworks enclosed a blockhouse which sheltered 100 men. After the British defeat at the battle of Chippawa, these men abandoned Fort Drummond and joined Major-General Riall's forces retiring to Fort George on 10 July 1814. For two weeks the fort and surrounding heights were held by American forces. When they retreated to Lundy's Lane, the British reoccupied Fort Drummond. 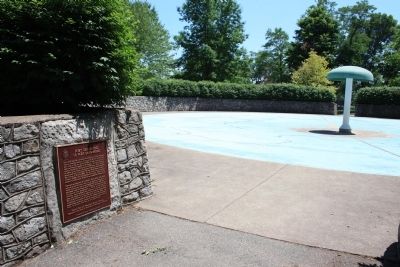 Topics. This historical marker is listed in this topic list: War of 1812.

Location. 43° 9.555′ N, 79° 3.263′ W. Marker is in Queenston, Ontario, in Regional Municipality of Niagara. Marker can be reached from Niagara Parkway north of Portage Road. This historic marker is affixed`to a stone wall, at the northern entrance to a children's water/splash recreation area, that is located in Queenston Heights Park. The Brock Memorial Monument is just a short walk away from this historic marker, to the northeast. Touch for map. Marker is at or near this postal address: 14184 Niagara Parkway, Queenston, Ontario L0S 1L0, Canada. Touch for directions. 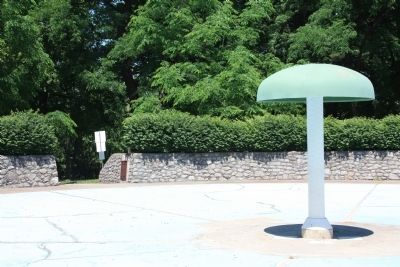 More about this marker. The earthwork, that has the stone wall that the historic marker is affixed to, that surrounds the water/splash recreational area marks the location of Fort Drummond, the recreational area having been built into what was left of the fort's earthworks. 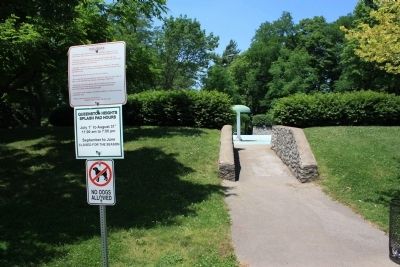