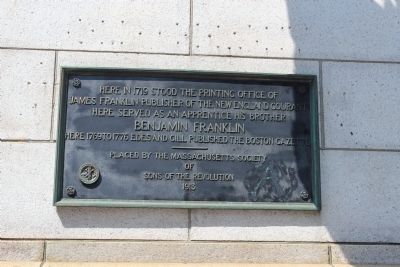 Here in 1719 stood the printing office of James Franklin publisher of the New England Courant. Here served as an apprentice his brother Benjamin Franklin Here 1769 to 1776 Edes and Gill published the Boston Gazette

Erected 1913 by Massachusetts Society of Sons of the Revolution.

Topics. This historical marker is listed in these topic lists: Arts, Letters, Music • Colonial Era • Communications. A significant historical year for this entry is 1719. 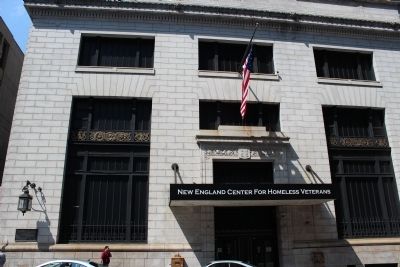 Photographed By Bryan Simmons, June 2012
2. New England Courant Marker
Marker is on the left side of the building

Click or scan to see
this page online
(within shouting distance of this marker); The Boston Massacre (about 300 feet away, measured in a direct line); Site of the First Meeting House in Boston Built A.D. 1632 (about 300 feet away); Magoun Counting-House Site (about 400 feet away). Touch for a list and map of all markers in Boston.