Salomon Brothers in the Civil War 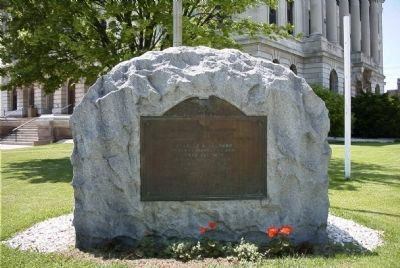 Erected 1927 by the People of Manitowoc and the Salomon Unit of the Steuben Society. Panel donated by Wisconsin Aluminum Foundry.

Other nearby markers. At least 8 other markers are within walking distance of this marker. American Legion Memorial Tree (a few steps from this marker); Manitowoc County Courthouse 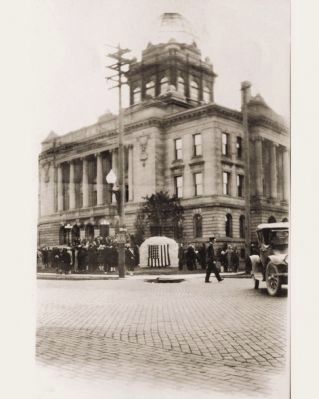 Also see . . .  Find A Grave memorials for the four Salomon brothers. (Submitted on April 27, 2014, by Kent Salomon of Manitowoc,, Wisconsin.)

Additional comments.
1.
The Salomon unit of the Steuben Society formed a committee to raise funds for a memorial to the four Salomon brothers. The committee consisted of W.H. Luehr, Emil Baensch, J.C. Schmidtman, and Henry Detjen who served as the treasurer. The public announcement was made in the newspaper on March 26th of the newly formed fundraising committee. The plea from the committee to the community was that “the

By Kent Salomon
3. Salomon Brothers in the Civil War Marker
historical value of the memorial will be manifoldly increased by giving everybody in the community the opportunity to have a part in it.” The help of all the banks in town were enlisted as a place to drop off their donations during the two week campaign.

The site selection for the monument would be one for a few discussions. Possible locations that were suggested were on the grounds of the Roosevelt school, formerly named the First Ward school where Edward had previously taught in 1850 before it was moved to the corner of South 8th and Hamilton streets, and later renamed the Southside High and then later the Lincoln school. Others thought that a public park would be a proper location and then the county board had voted and unanimously granted the use of the Courthouse Square as a suitable location. “The site for the monument had not been decided on and the selection would be influenced by the size of the funds raised, but it will be placed in a location where tourists passing through Manitowoc will become familiar with the four Manitowoc brothers who served the Union with distinction in the war of the rebellion.”

News of this effort must have traveled fast as donations were not limited to Manitowoc residents but also came from Madison, St. Louis, Denver, and San Francisco. In a letter dated April 2nd, Dr. Louis H. Kahlenberg, of the University 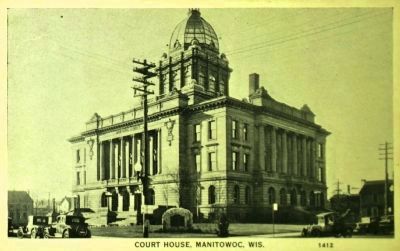 By Berkedal & Shimek, circa 1930
4. Salomon Brothers in the Civil War Marker, Historical Postcard View
The marker is in the foreground, and the Manitowoc County Courthouse forms the background.
of Wisconsin, Madison, and one time a resident of Two Rivers writes, “Dear Mr. Leuhr: I am receipt of your kind letter announcing that the Steuben Society of Manitowoc proposes to erect a monument to commemorate the distinguished civic and patriotic services of the Salomon brothers, at one time residents of Manitowoc. This project seems to me eminently fitting, and meets with heartiest approval. By thus recognizing and proclaiming to the State and Nation the splendid work which these able, self-sacrificing men have done, Manitowoc County will certainly honor itself and arouse the highest aspirations of our citizens, our children, and children’s children. The contributions toward this fund should come from as large a number of citizens of the county as possible, for the value of the memorial is enhanced by having the monument erected by the subscriptions of many citizens rather than by unusually large donations of a few. With best wishes for the success of the efforts of your committee, I am very sincerely yours, L.H. Kahlenberg. P.S. - As a former citizen of Manitowoc County, I trust you will permit me to contribute to the proposed Salomon Memorial. My check for ten dollars is enclosed herewith.” The fundraising campaign was successful in raising $2,775 for the purchase of the 27 ton granite monument. The inset bronze tablet was donated by the Wisconsin Aluminum Foundry. 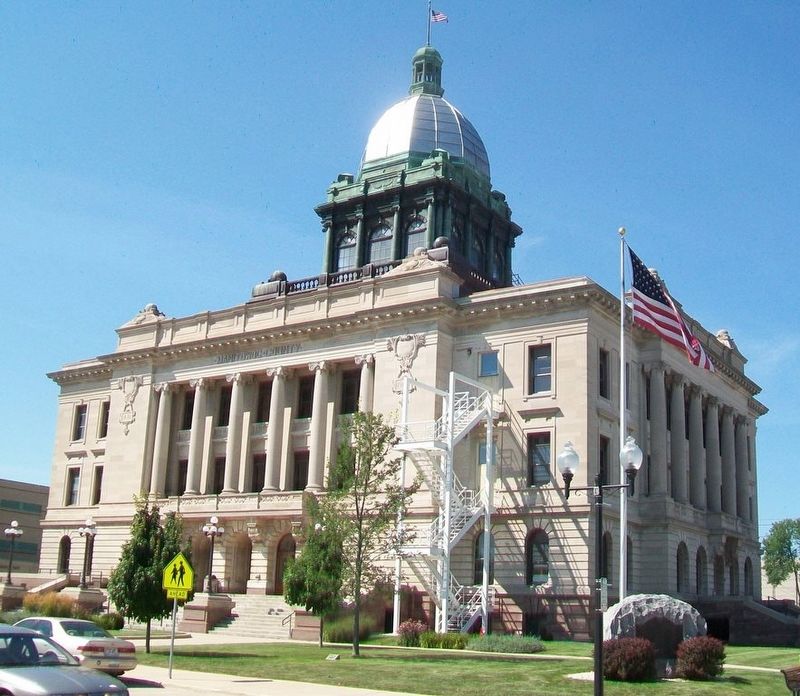 
A year and a half after the campaign began it was time for the dedication ceremonies. The final decision was made to place the monument on the northeast corner of the courthouse lawn, set facing diagonally to the corner of South 8th and Washington streets. The ceremony took place on the afternoon of Sunday, October 23, 1927. It was a bright and sunny day as hundreds of Manitowoc County residents and guests assembled in front of and around the courthouse. The Marine Band of the Aluminum Goods Company escorted Mr. Luehr and Governor Zimmerman to the courthouse from the Saenger Hall after a concert was given and the singing of the “Star Spangled Banner”.

W.H. Luehr, president of the Stueben Society presided over the event. He opened with a brief sketch of the lives which they were there to honor and introduced the members of the Salomon family in attendance which were Herman Salomon’s daughters, Clara and Serena. The tablet was draped by a silk American flag and ceremoniously unveiled by young Marie Tietgen, a 5th generation relative of the Salomon family. She then placed a wreath on the monument and was then presented with a bouquet of flowers by the members of the Steuben Society. Marie is the daughter of Mr. and Mrs. Roland Tietgen of Milwaukee.

Governor Fred R. Zimmerman was invited to come to Manitowoc and speak at the dedication. He began “Let me first congratulate you on the most fitting place you have chosen for this memorial. On this site, in the old courthouse, Frederick Salomon served as register of deeds; three blocks south of here stands the homestead of his parents; and one block to the eastward his brother, Edward, served as teacher in the First Ward school.” Governor Zimmerman went on to deliver the principal address where he extolled the virtues and service records of the four brothers and held out their careers as models for the emulation of our youth. His closed his remarks with: “The four Salomon brothers deserve to have their names enrolled on the same page of the Book of Fame whereupon are inscribed those of Steuben, Herkimer, Muchlenberg, Schurz, and Sigel. This memorial should become a shrine where patriotic Americans, particularly those of German ancestry, may come for inspiration in future years, and renew their devotion to the high ideals of liberty and unselfish public service which are the glory of our country, and the best guarantee of its place of honor among the nations of the world.”