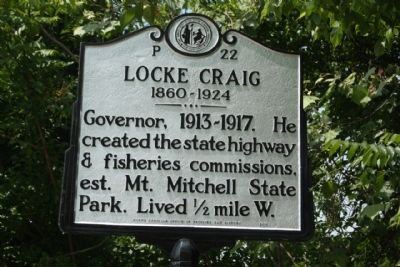 Photographed By Mike Stroud, May 19, 2012
1. Locke Craig Marker
Inscription.
Locke Craig. Governor, 1913-1917. He created the state highway and fisheries commissions, est. Mt. Mitchell State Park. Lived ½ mi. W. . This historical marker was erected in 2011 by North Carolina Office of Archives and History , Replacement of 1949. It is in Asheville in Buncombe County North Carolina

Topics and series. This historical marker is listed in these topic lists: Animals • Parks & Recreational Areas • Roads & Vehicles. In addition, it is included in the North Carolina Division of Archives and History series list. 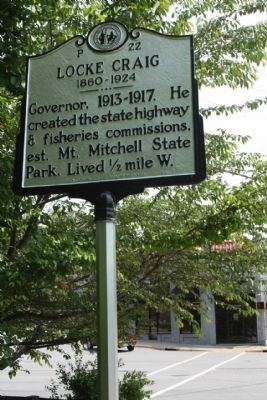 Photographed By Mike Stroud, May 19, 2012
2. Locke Craig Marker at the intersection of Chestnut Street and Broadway Street

Regarding Locke Craig. Bertie native and Buncombe resident Locke Craig (1860-1924), the first governor from the mountain region since Zebulon B. Vance, made transportation improvements and conservation efforts the hallmarks of his administration. The “Little Giant of the West” was born in the east on August 16, 1860, in Bertie County to Baptist minister Andrew Murdock Craig, who was of Scottish ancestry, and the former Clarissa Gilliam. Young Craig attended local schools and the Horner Military School in Henderson.
Shortly after the Civil War, his father died. His widowed mother moved with him to Chapel Hill where he enrolled at age fifteen. Upon graduation in 1880, he taught chemistry for one year at the University. Teaching, he found, was not his calling and, after study of the law, he was admitted to the bar in 1882. The following year he established a practice in Asheville, where 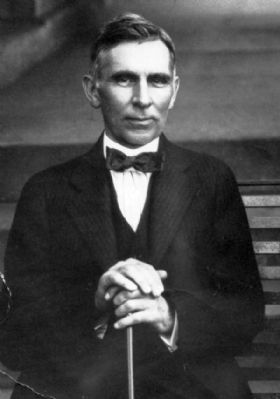 North Carolina Office of Archives & History
3. Locke Craig
he would live the rest of his life with the exception of his term in the Governor’s office. In 1891 he married Annie Burgin of McDowell County; they had four sons.
In 1892 and 1896 Locke Craig served as a presidential elector for William Jennings Bryan which whetted his appetite for politics. The experience led to his election to the state House for two terms in the eventful 1899-1900 and 1901 sessions. An acquaintance of Charles B. Aycock from their student days in Chapel Hill, Craig took a leading role in the white supremacy campaign, both on the stump and in the well of the House.
Craig lost the Democratic nomination for the United States Senate in 1902 to Lee Overman and, in a three-way race with W. W. Kitchin and Ashley Horne, lost his party’s nomination for governor in 1908. The latter race was very close, extending to sixty-one ballots at the convention in Charlotte, and four years later Craig by acclamation was his party’s nominee. In the fall of 1912 he defeated Republican Thomas Settle and Progressive Iredell Meares.
In his inaugural address Craig issued his “Pledge of Progress,” promising to carry forward the education reforms of his predecessors. In the course of the speech he denounced the railroad freight rate structure as discriminatory to North Carolina business. That system allowed railroad companies to charge higher rates within the state than those paid by shippers in neighboring states. The readjustment of those rates in 1915, negotiations in which the governor took a personal role, spurred economic development and was the signal achievement of his administration.
During his term a framework was established for the extension of the road system with the creation of the State Highway Commission in 1915. The number of miles in the system increased from 5,000 in 1913 to 15,000 four years later. The Central Highway (later known as the Old Hickory Highway) was completed across most of the state, including the section up the mountain at Swannanoa Gap built with convict labor. The State Fisheries Commission was created in 1915.
Governor Craig took an interest in the welfare of victims of the July 1916 floods in western North Carolina and coordinated relief efforts. In 1916 the governor mobilized the National Guard for service along the U.S. border with Mexico. He worked to have Cuba withdraw its claim for payment of Reconstruction bonds. Governor Craig served as president of the Appalachian Park Association and took a leading role in the development of Pisgah National Forest. In 1915, at his urging, the state purchased 600 acres at the summit of Mount Mitchell for the creation of the first state park.
At the conclusion of his gubernatorial term Craig returned to his law practice and his home on the Swannanoa River in Asheville. He died on June 9, 1924, and is buried in that city’s Riverside Cemetery. (NOTE: The house referenced in the text of the marker no longer stands; the text of the sign will be changed when funds permit.)
(North Carolina Office of Archives & History — Department of Cultural Resources)
Credits. This page was last revised on June 22, 2021. It was originally submitted on July 3, 2012, by Mike Stroud of Bluffton, South Carolina. This page has been viewed 511 times since then and 60 times this year. Photos:   1, 2, 3. submitted on July 3, 2012, by Mike Stroud of Bluffton, South Carolina.
Share this page.