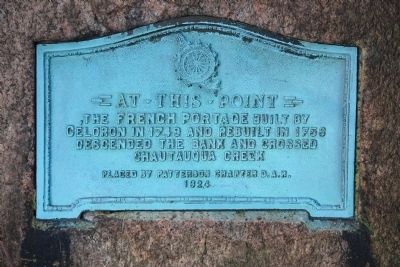 By Dale K. Benington, June 9, 2012
1. At This Point Marker
Inscription.
At This Point. .
The French Portage built by Celoron in 1749 and rebuilt in 1753 descended the bank and crossed Chautauqua Creek. . This historical marker was erected in 1924 by the Patterson Chapter D.A.R.. It is Near Westfield in Chautauqua County New York

Erected 1924 by the Patterson Chapter D.A.R.

Topics and series. This historical marker is listed in these topic lists: Colonial Era • Exploration • War, French and Indian. In addition, it is included in the Daughters of the American Revolution series list.

Location. 42° 18.399′ N, 79° 34.72′ W. Marker is near Westfield, New York, in Chautauqua County. Marker is on Sherman-Westfield Road (County Route 74) south of Fort Street, on the left when traveling south. This historic marker is a DAR marker that is affixed to a moderately sized boulder, that is located in a small grove of trees along the east side of the road. This grove of trees is situated between the north and south driveway entrances to some residential property. Touch for map. Marker is in this post office area: Westfield NY 14787, United States of America. Touch for directions.

Other nearby markers. At least 8 other markers are within one mile of this marker, measured as the crow flies. The Old Portage Road (approx. half 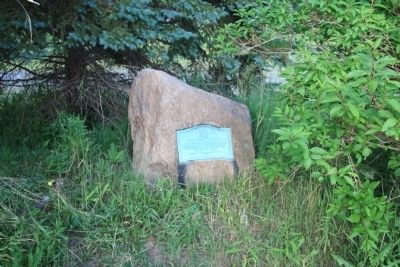 Years earlier (back in the days of not having online resources for the purposes of research) I had stopped by the Westfield area and unsuccessfully searched for historic markers related to the French activities in this region. So it was particularly gratifying that with the help of online searches and some assistance from Marybelle 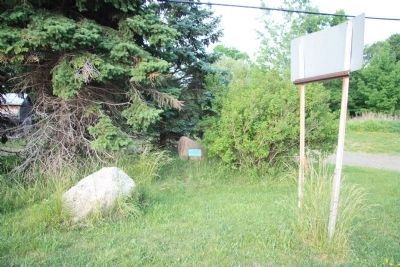 By Dale K. Benington, June 9, 2012
3. At This Point Marker
View of the historic marker set back in the grove of trees, near the southern driveway entrance to a residential property.
Beigh, the Westfield Historian, that I was finally able to located several markers related to this important French Portage that connected the Great Lakes water system to the Mississippi Valley water system. 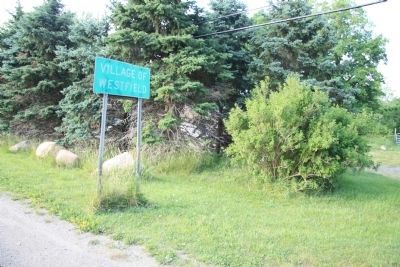 By Dale K. Benington, June 9, 2012
4. At This Point Marker
Although the historic marker cannot be seen, it is located just to the right of the "Village of Westfield" road sign, behind the bush. 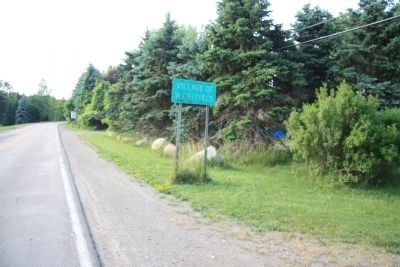