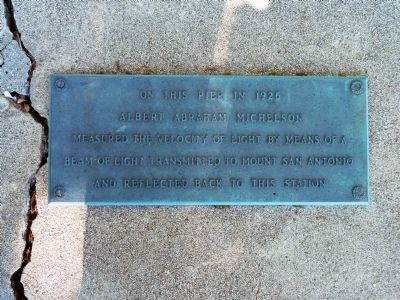 Photographed By Roger W. Sinnott, June 4, 2012
1. Michelson Pier on Mount Wilson Marker
Inscription.
Michelson Pier on Mount Wilson. . , On this pier in 1926 Albert Abraham Michelson measured the velocity of light by means of a beam of light transmitted to Mount San Antonio and reflected back to this station. . This historical marker is Near Pasadena in Los Angeles County California

On this pier in 1926 Albert Abraham Michelson measured the velocity of light by means of a beam of light transmitted to Mount San Antonio and reflected back to this station.

Topics. This historical marker is listed in this topic list: Science & Medicine. A significant historical year for this entry is 1926.

Location. 34° 13.353′ N, 118° 3.475′ W. Marker is near Pasadena, California, in Los Angeles County. Marker can be reached from Mount Wilson Road. Marker is within the grounds of Mount Wilson Observatory, on the left when traveling south on an unnamed service road. The marker is about 125 yards NNW of the astronomers’ residence (called the Monastery), and 25 yards north of one of the smallest observatory domes on the mountain. Touch for map. Marker is in this post office area: Pasadena CA 91107, United States of America. Touch for directions. 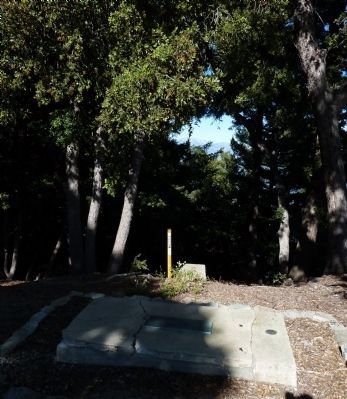 Photographed By Roger W. Sinnott, June 4, 2012
2. From Marker Looking Northeast
Through the hole in the trees you can see Mount San Antonio, popularly called Old Baldy, 22 miles from Mount Wilson.

Regarding Michelson Pier on Mount Wilson. American physicist Albert Abraham Michelson (1852-1931) made a number of measurements of the speed of light during his lifetime. The best of these, in 1924-26, used equipment set up at this spot on Mount Wilson and at a corresponding station on Mount San Antonio, also called Baldy, 22 miles away. To help in the determination, the U.S. Coast and Geodetic Survey measured the spacing between the two stations to within 1 inch.

The apparatus at Mount Wilson consisted of a rapidly spinning disk with 8, 12, or 16 flat mirrors equally spaced around the rim. Light from a powerful arc lamp bounced off this spinning rim, traveled from Mount Wilson to Baldy, was reflected back, and bounced again off another part of the same spinning rim. The deflection of the return beam was used to calculate the light-travel time for the round trip.

Michelson’s final value for the speed of light was 299,796 ± 4 kilometers per second, which compares 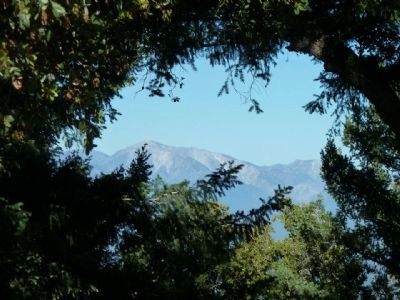 Michelson is even better known for the famous Michelson-Morley experiment of 1887. Although it failed to show the “ether drift” Michelson was looking for, it helped to pave the way for Einstein’s special theory of relativity (1905).

(The above details of Michelson’s apparatus are adapted from K. D. Froome and L. Essen, The Velocity of Light and Radio Waves, Academic Press, 1969.) 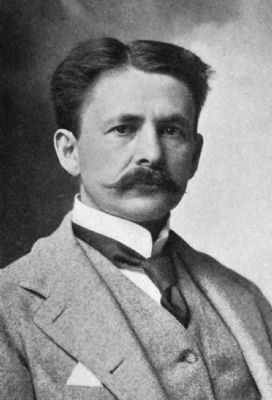 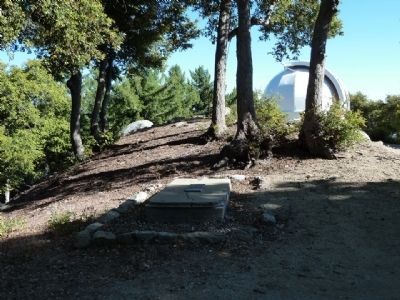 Photographed By Roger W. Sinnott, June 4, 2012
5. Looking South from Marker
In the background is one of the smallest observatory domes on Mount Wilson. 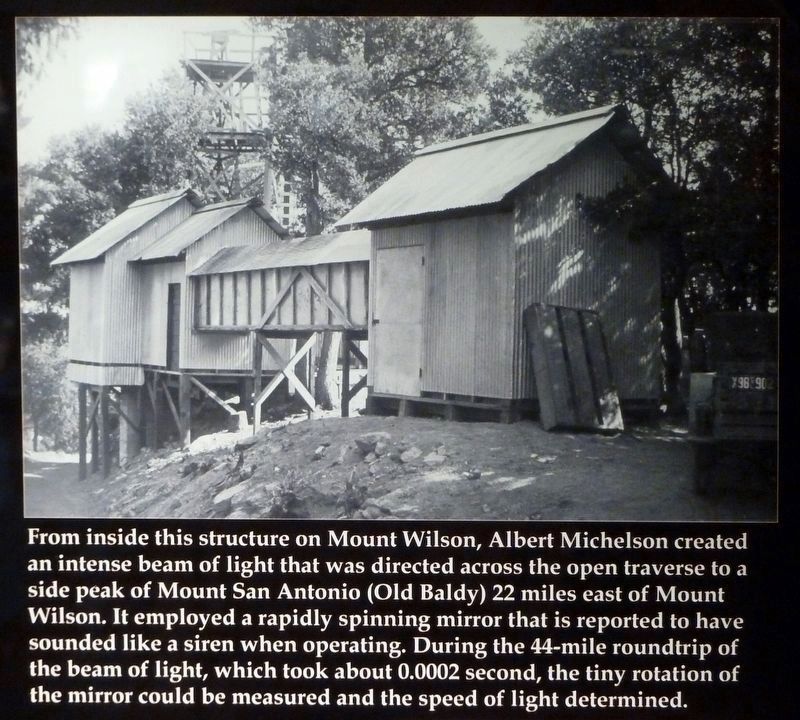