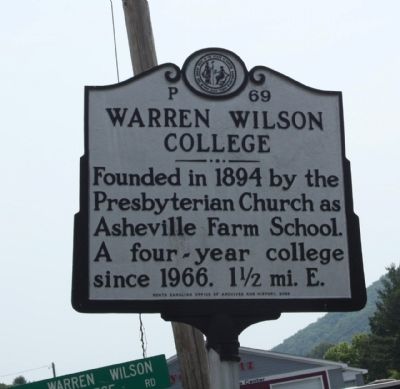 Photographed By Mike Stroud, May 19, 2012
1. Warren Wilson College Marker
Inscription.
Warren Wilson College. . Founded in 1894 by the Presbyterian Church as Asheville Farm School. A four-year college since 1966. 1½ mi. E. . This historical marker was erected in 2005 by North Carolina Office of Archives and History. It is in Swannanoa in Buncombe County North Carolina

Founded in 1894 by the Presbyterian Church as Asheville Farm School. A four-year college since 1966. 1½ mi. E.

Topics and series. This historical marker is listed in these topic lists: Agriculture • Churches & Religion • Education. In addition, it is included in the North Carolina Division of Archives and History series list. A significant historical year for this entry is 1894. 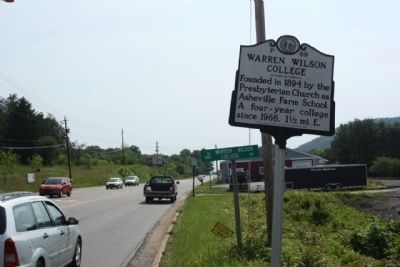 Regarding Warren Wilson College. Asheville Farm School, the primary forerunner of Warren Wilson College, was established as a mission school by the Northern Branch of the Presbyterian Church. The site selected was a 420-acre farm in the Swannanoa Valley about ten miles east of Asheville. By combining farm work with education, the school, which opened on November 30,1894, aimed to provide new opportunities for young men in the mountains.
The most significant change in the school’s development came in 1942, when the Asheville Farm School combined with the Dorland-Bell School, a Presbyterian institution for young women in Hot Springs. Junior college classes were added and the new school was named for Warren H. Wilson, former Secretary of Rural Church Work for the church’s Board of National Missions. Arthur M. Bannerman served as Warren Wilson College president from 1942 to 1971.
Lower grades gradually were dropped; the last high school class graduated in 1957. In 1966 Warren Wilson
became an accredited, four-year, liberal arts college offering the bachelor of arts degree. 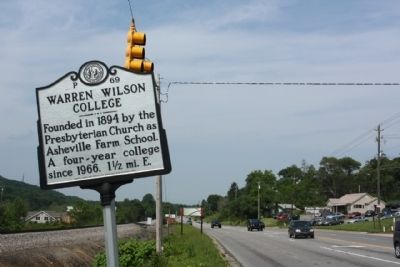 Photographed By Mike Stroud, May 19, 2012
3. Warren Wilson College Marker, looking west
In 1973 the school’s ties with the Presbyterian’s Board of National Missions were severed. Presently the school receives support from foundations and individual churches and operates under an independent board of trustees. Enrollment is around 450 students; all but a few live on campus. True to its origins, the school requires that every student, in addition to meeting his classes, contribute three hours of labor each day to the college in return for room and board.
(North Carolina Dept. of Cultural Resources)