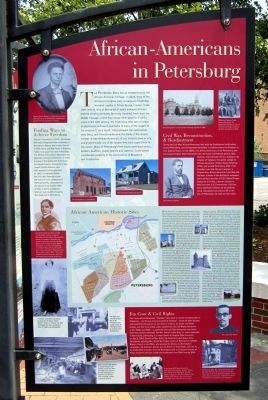 The Petersburg area has an extraordinarily rich African-American heritage. In 1625, most of the Africans in Virginia were servants at Flowerdew Hundred, nearby in Prince George County. In the 18th century, tens of thousands of newly enslaved Africans entered Virginia at nearby Bermuda Hundred, fresh from the Middle Passage—more than at any other place in Virginia. Later in the 18th century, the Petersburg area was a hotbed of abolitionist sentiment, and home to many of the leaders of the movement. As a result, many enslaved men and women were freed, and Petersburg became the home of the largest number of free African-Americans of any Virginia town or city, and proportionally one of the largest free black populations in the nation. Many of Petersburg’s free blacks were blacksmiths, barbers, boatmen, stable keepers and caterers. Some owned considerable property in the communities of Blandford and Pocahontas.

Gabriel’s Insurrection (1800), the largest and most widespread slave conspiracy in the nation’s history, had a major branch in Petersburg, and Nat Turner’s Rebellion (1831) 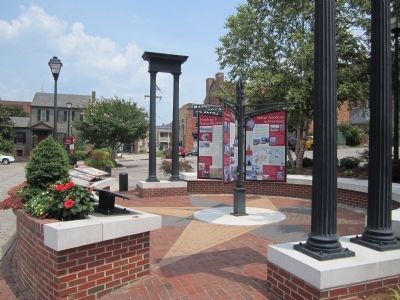 Click or scan to see
this page online
took place not many miles away. The African Colonization Movement was especially strong in Petersburg. In 1829, a group of free blacks left Petersburg to colonize Liberia. Among them was Joseph Jenkins Roberts, who later became its first president in 1848. For decades before the Civil War Petersburg was the scene of much Underqround Railroad activity, dramatized by the failure of the Keziah Affair (1858), in which a Delaware schooner was caught smuggling five slaves out of Petersburg.

During the Civil War, African-Americans both built the Confederate fortifications around Petersburg, and distinguished themselves in attacking those fortifications as U.S. Colored Troops. In the 1800s, free African-Americans in the Petersburg area and around Virginia allied themselves with the former Confederate general, Billy Mahone, and instituted reforms, leading to the creation of Virginia’s first public college for African-Americans, Virginia State University (VSU), just outside Petersburg. VSU’s first President was John Mercer Langstrom, a Virginia-born African-American from Ohio who had been a leader of the abolitionist movement and a primary recruiter of U.S. Colored troops during the Civil War, a former minister to Haiti and later U.S. Congressman. VSU has had a significant influence on the political, social, educational and cultural life of the City of Petersburg, the state and the nation.

The Conservative Democratic “Machine” that arose to rid the Commonwealth of Mahonism—and African-American political influence—lasted for eight decades and established the pattern of Jim Crow in Virginia. Its power was finally broken, and Jim Crow ended, under assault from the Civil Rights Movement in the 1950s and 1960s—a movement that saw Petersburg men and women exercising national influence. The Rev. Martin Luther King, Jr. came repeatedly to Petersburg, culminating in a major speech at Virginia Sate University on July 2, 1965. Several of Rev. King’s top lieutenants were drawn from Petersburg, including Rev. Wyatt Tee Walker, pastor of Petersburg’s Gillfield Baptist Church in the 1960s, who planned the Albany and Birmingham campaigns, the Children’s March, and the March on Washington, and saw to the publication of Letters from the Birmingham Jail as Executive Director of King’s Southern Christian Leadership Conference from 1960 through 1964.

[A] The Triangle – Also known as the Avenue, this was Petersburg’s black business center until the 1970s. In the 1870s and 1880s when the political and economic climate worsened as a result of white reaction to Reconstruction, African Americans formed their own separate society. At this time many black businesses were established. The Rialto Theater, designed by black architect Charles T. Russell, was built in 1893 when blacks had limited access to white establishments. [B] Gothic Cottage - Built ca. 1862, this is one of the few Gothic Revival dwellings in Petersburg and is reminiscent of the picturesque houses designed by Andrew Jackson Downing in the 1840s. In the early 1900s it was home to the family of Roger Pryor Campbell, a successful black barber and property owner. [C] First Baptist Church - Built in 1870 in the Italianate style; remodeled in 1885. The oldest black church in America, First Baptist Church was founded in 1774 in Prince George County. The city’s first black high school started here in 1870. It was replaced in 1874 when Peabody Public High School for blacks was built. [D] St. Stephen’s Episcopal Church - Originally located on Perry Street, St. Stephen’s Episcopal Church was organized in 1868 with a black vestry and a black rector, Rev. J.S. Atwell. [E] Gillfield Baptist Church - Established 1786. Re-built in the Romanesque Revival style between 1874 and 1879. Considered the second oldest black congregation in the country. Gillfield originated in the Davenport Church in Prince George county in 1786. In 1800 it moved to Petersburg and was renamed the Sandy Beach Church. In 1818, the church members purchased the lot on Perry Street where they built the first of four successive churches at the present location. [F] Oak Street A.M.E. Zion Church - Oak Street African Methodist Episcopal Zion Church began in 1818 as a mission church of the Washington Street Methodists Church with a white minister and a black majority congregation. In 1879, black church members voted to withdraw from that Church and to unite with the “Freedom Church,” associated with Harriet Tubman and Frederick Douglass. That same year, the present church was built in the Italianate sytyle with free labor supplied by local blacks. [G] Joseph Jenkins Roberts marker - Roberts helped Liberia win its independence from colonizers and was elected the first president in 1847. [H] Petersburg Public Library - This building became the focus of the Civil Rights Movement in the 1960s when two black ministers, Wyatt Tee Walker and R.B. Williams, were arrested for entering the main room of the library. [I] Poplar Lawn - The site of a Civil War Hospital for black soldiers and a retention camp for black prisoners after the Battle of the Crater. Blacks held Emancipation Day speeches and programs here from January 1866 until the 1870s. [J] Peabody High School (site) - Peabody Colored High School, built in 1874, was the first public high school for African Americans in Virginia and one of the oldest in the South. [K] Third (Baptist) Church - In 1841, under control of their white patrons, a group of free blacks formed Third Baptist. The church remained under white control until after the Civil War. [L] New and Byrne Street Houses - 514 and 516 Byrne Street were Sears Catalog homes built ca. 1910-1920 for Dr. James B. Darden and Dr. O.R. Johnson. 131 New Street was built ca. 1890. This house was a hospital for blacks in the 1920s and 1930s. 200 New Street was designed in the 1950s by black architect William Henry Moses for Dr. Henry Williams. [M] Suzie R.C. Byrd House - In 1937, Suzie Byrd worked as a writer for the Petersburg District of the Negro Federal Writers’ Project of Virginia. Her interviews with ex-slaves in her own neighborhood provided first-time information on the slave’s own view of slavery. [N] Upper Appomattox Canal (site) - The Upper Appomattox Navigation canal system was built between 1795 and 1850 and connected Petersburg with farms as far as Farmville. Built and operated by mostly black laborers, the canal ran into Petersburg between Commerce and Upper Appomattox Streets roughly along the present railroad line. [O] James M. Wilkerson House - This exuberant Queen Anne/Georgian Revival style house was built ca. 1900 for James Wilkerson, a prominent black businessman. His funeral home business, begun in 1874, continues today. [P] Corling’s Corner - This was where enslaved blacks were brought, sold and held. Before the Civil War, slaves were annually hired in December as domestics and laborers. Petersburg’s tobacco industry used mostly hired slave labor. [Q] Pocahontas Chapel (site) - The civic, social and political center for Pocahontas, this 1997 chapel replaces the 19th-century building lost to a tornado in 1993. The original structure is believed to have stood at City Point, transported by barge to Pocahontas in 1868 and use das a Freedman’s Bureau School. [R] Underground Railroad House - Local legend has it that this house, built ca. 1825-1850, was part of the antebellum Underground Railroad by which slaves escaped to freedom in the Keziah Affair. [S] Jarrat House - Built ca. 1820 in the Federal style, this house is named after the family who owned it for over a century. The earliest Jarrat to settle in Pocahontas was John Jarrat, a free black waterman and a founder of the Sandy Beach Church. [T] People’s Cemetery - The Petersburg Beneficial Society of Freemen of Color was established in 1815 to support its members in times of sickness and death. They purchased their first lot for a burial ground in 1818. People’s Cemetery, also known as Providence Cemetery, incorporates their second lot, purchased in 1845. [U] Virginia State University - Established in 1852 by the General Assembly as the Virginia Normal and Collegiate Institute.

Erected by City of Petersburg.

Topics and series. This historical marker is listed in these topic lists: African Americans • Churches & Religion • Civil Rights • Education. In addition, it is included in the African Methodist Episcopal Zion (AME Zion) Church, and the Historically Black Colleges and Universities series lists. A significant historical month for this entry is January 1866.

More about this marker. The marker contains several photographs with the captions:

Joseph Jenkins Roberts, a Petersburg resident who grew up in the Pocahontas neighborhood, became the first president of Liberia.

Elizabeth Keckley was born in 1819. “Lizzie Hobbs” lived as a slave in Dinwiddie and Petersburg. She eventually bought her freedom and became the personal seamstress and friend of Mary Todd Lincoln, writing the book Behind the Scenes, an account of happenings in the White House during the Lincoln years. She came back to Petersburg with the Lincolns in April 1865. “The scenes suggested painful memories, and I was not sorry to turn by back on the city.”

Officers of Tobacco Trade Union, Petersburg, Va. Reportedly displayed as part of the American Negro exhibit at the Paris Exposition of 1900.

The Jarrat House, in Pocahontas

A teacher, Suzie Byrd interviewed ex-slaves for the Negro Federal Writers’ Project of Virginia. Her field techniques have been compared to those of modern-day ethnography.

The Rialto and Club Chatter Box in the Triangle became popular places for Petersburg blacks to socialize before desegregation.

Above and left: New Market on South Avenue in the Triangle. During the 19th and early 20th century it was the marketplace for hucksters and farmers from Southside Virginia and North Carolina.