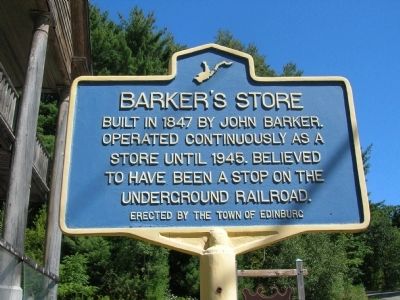 Photographed By Howard C. Ohlhous, September 6, 2009
1. Barker's Store Marker - Edinburg, NY
Inscription.
Barker's Store. .
Built in 1847 by John Barker. Operated Continuously As A Store Until 1945. Believed To Have Been A Stop On The Underground Railroad. . . This historical marker was erected by Town of Edinburg. It is in Edinburg in Saratoga County New York

Built in 1847 by John Barker.
Operated Continuously As A
Store Until 1945. Believed
To Have Been A Stop On The
Underground Railroad.

Erected by Town of Edinburg.

Topics. This historical marker is listed in these topic lists: Abolition & Underground RR • Notable Buildings. A significant historical year for this entry is 1847.

Location. 43° 13.291′ N, 74° 6.23′ W. Marker is in Edinburg, New York, in Saratoga County. Marker is at the intersection of Military Road and North Shore Road (County Route 4), on the right when traveling south on Military Road. The marker is posted in front of the store at the intersection of Pucker Street, Military Road, and North Shore Road, which is County Route 4, just to the north of the Edinburg 4 Corners area. Touch for map. Marker is in this post office area: Northville NY 12134, United States of America. Touch for directions.

Other nearby markers. At least 8 other markers are within walking distance of this marker. Beecher's Store (a few steps from this marker); Beecher Hollow (about 500 feet away, measured in a direct line); Copeland Carriage Shop (about 600 feet away); Carriage Shop 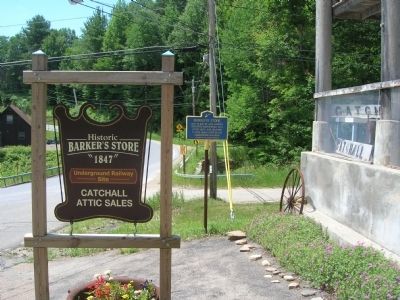 More about this marker. The shape in relief at the top of the marker is an outline of the Great Sacandag Reservoir.

Regarding Barker's Store. From the Daily Gazette of Schenectady, New York on Friday, October 29, 2006:


Dona Robinson was cleaning out a cupboard in the historic Barker General Store when she noticed a peculiar square wood panel lodged behind the aged drawers.
The Edinburg resident had initially planned to turn the cabinets into extra shelving for her small Beecher Hollow business, selling odds and ends to summer tourists visiting the Great Sacandaga Lake. Upon opening the small door, she discovered a room large enough to fit two or three standing people.
"I thought maybe it was left over from Prohibition," she recalled.
Then Robinson noticed the wrought iron hooks that fastened from inside the room to lock the door into place. Her discovery confirmed a long-standing 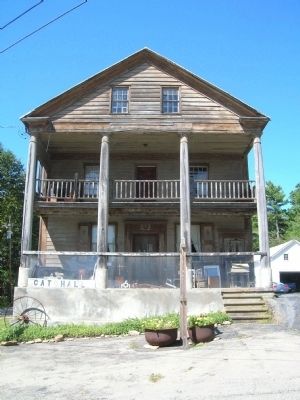 Photographed By Howard C. Ohlhous, September 6, 2009
3. Barker's Store
legend among townspeople that the sleepy hamlet, known to be a hotbed of abolitionist activity during the 19th century, was also a station along New York Underground Railroad.
"It makes perfect sense that [the Beecher Hollow] area would have been a route for the Underground Railroad because it located on the old Military Road, which ran all the way to Schenectady," said Edinburg historian Priscilla Edwards.
The Underground Railroad was a clandestine networks of routes and safe havens through which escaped slaves could trek northward undetected by federal marshals or bounty hunters. In New York, this network generally followed the Hudson River valley to Albany, then traveled through Schenectady County and along the Erie Canal to the Canadian border.
In 1850, the federal government passed a set strict of fugitive slave laws, making the journey to freedom increasingly dangerous even in New York, which had abolished slavery in 1827. The new law penalized federal marshals who allowed runaway slaves to elude them or any individual who aided in the escape.

In response to this threat, abolitionists often equipped their homes with secret tunnels or hidden rooms where runaway slaves could be rushed away or temporarily stowed.
"If they were sympathizers, they would plan hiding spaces into the construction of their homes," said Edwards. 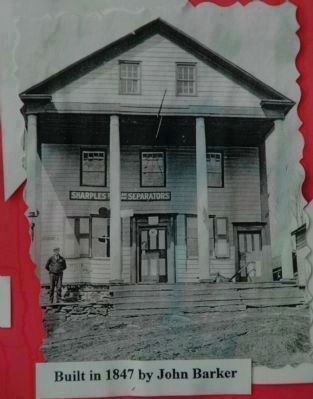 Photographed By Howard C. Ohlhous, July 5, 2011
4. Barker's Store
This historic photo of the Barker Store is on a nearby display assembled by the local historian at Edinburg. The second floor balcony/railings that are on the building presently are not in this view. Note the ad on the storefront; the Sharples Separator Company of West Chester, Pennsylvania manufactured Sharples Tubular Cream Separators, the type used from the 1880s until the early 1940s by farmers to produce cream from their dairy cows.
"So a lot of the older houses have these spots built in."
Dona Robinson, owner of the former Barker General Store, holds a wooden panel that latched from the inside, securing a space where escaped slaves may have hidden on the way to freedom.
Because of the secret nature of these routes and safe havens, many Underground Railroad routes in the rural regions of the Adirondacks have been forgotten.
Such was the case with Barker General Store before Robinson found the hidden room in 1995, more than a century and a half after it first played a role in the historic American movement.
Local residents had long speculated that the 19th century inhabitants of Beecher Hollow aided the Underground Railroad.
Local legend had it that escaped slaves were hidden away in a secret room in the old post office, Robinson recalled being told by her husband, Marshall, a life-long resident and former supervisor of Edinburg.
Initially, the Robinsons were told the old Beecher Hollow post office was in a house across the street from their store.
But after doing further investigation, they learned this location had switched several times and that John Barker, the man who built and operated the General Store, had served as the hamlet post master.

The son of a Methodist preacher, Barker was a staunch abolitionist and among several prominent 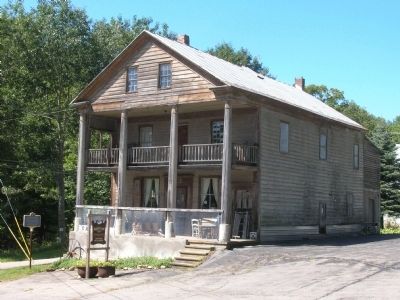 Photographed By Howard C. Ohlhous, September 6, 2009
5. Barker's Store
residents who supported the antislavery cause.
Edwards said the town was one of the last visited by Abel Brown, the pastor of the Sand Lake Baptist Church and a "fiery abolitionist," who gave a speech about the Underground Railroad in 1844.
In 2002, the store was listed on the National Register of Historic Places, which said the Barker family "known anti-slavery religious fervor" coupled with the hidden room is convincing evidence to support the local Underground Railroad stories.
"It just all falls into place that this area was a hiding space," Edwards said.
Less than 13 miles southwest of the Barker General Store in Fulton County, another centuries-old structure recently received public recognition as a former station.
Last month, the Broadalbin Historical Society erected a historical marker acknowledging the Locust Grove Farm, the former home of Tiffany Brockway, as a stop along the Underground Railroad.
While there are several sites rumored to be stations, Town historian Gordon Cornell said the nearly 200-year-old home off Route 110 is the only one where written proof exists.
The History of Montgomery and Fulton Counties, published by F.W. Beers & Company in 1878, details an underground tunnel leading away from the home, presumed to be used by the Underground Railroad.
Unlike many of the sympathizers of the time, Cornell said Brockway 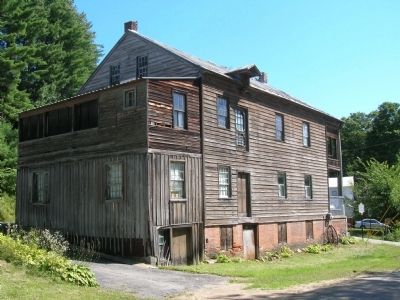 Photographed By Howard C. Ohlhous, September 6, 2009
6. Barker's Store
was forthright about his support for the abolitionist cause.
Brockway, a the veteran of the War of 1812 and a colonel in the local militia, was considered one of the area first outspoken abolitionists.

"He was the type of person that had the strength of his convictions to stand up and say that it was wrong and do something about it," Cornell said. "Many others did it in silence, as to not risk discovery."
Cornell said no one is sure what became of the tunnel, but the former owners of the home indicated that it remained open until the mid-20th century.
Historians don’t know how the two locations might have joined to other known sites in the Capital Region or Mohawk Valley.
Part of the problem is the Great Sacandaga Lake itself, which wiped out a 28-mile long swath of riverside villages and settlements when it was created by the state as a flood control reservoir in 1930.
"We will just never know what went on in those towns," said Peter Betz, the Fulton County historian. "So [the Underground Railroad] has its secrets."
Still, there are plenty of 19th century homes in the region that bear distinct signs of being part of the movement, Betz said.
The former Moir Farm off Mc-Queen Road in Perth, for example, has an area that Betz suspects may have once hidden escaped slaves.
In the kitchen of the mid-19th century 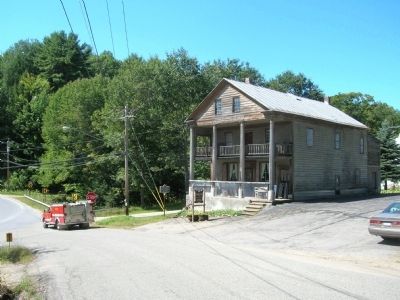 Photographed By Howard C. Ohlhous, September 6, 2009
7. Barker's Store
home is a small, obscured panel in the kitchen.
"There a small opening that opens into a triangular spot, where three or four people could get in and sit," he said.
And while the home is quite a distance away from the roads that once linked Johnstown and the Mohawk Valley, Betz speculated that the farm might have served as an alternate station during times of intense scrutiny along more traditional routes.
"Homes like these might not have been continuously used, but rather intermittently used," he said.
While it important to identify homes that may have been used as stations, Betz stressed the importance of tracing the routes.
Many times, he said, the local folklore about these passages can lead to rich discoveries about long forgotten stations of the Underground Railroad.
"A lot of times when you get a lot of people talking about a legend, you'll find there something behind them," he said. 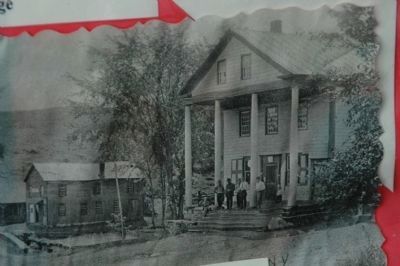 Photographed By Howard C. Ohlhous, July 5, 2011
8. Barker's Store
This historic photo of the Barker Store is on a nearby display assembled by the local historian at Edinburg. 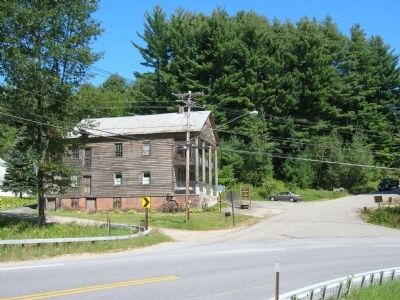