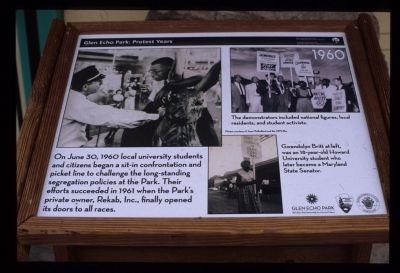 On June 30, 1960 local university students and citizens began a sit-in confrontation and picket line to challenge the long-standing segregation policies at the Park. Their efforts succeeded in 1961 when the Park's private owner, Rekab, Inc., finally opened the doors to all races.
Caption of photo in upper left hand corner of marker
The demonstrators included national figures, local residents and student activists.
Caption of photo at bottom center of marker
Gwendolyn Britt at left, was an 18-year-old Howard University student who later became a Maryland state senator.

Topics and series. This historical marker is listed in these topic lists: African Americans • Civil Rights. In addition, it is included in the Historically Black Colleges and Universities series list. A significant historical month for this entry is June 1830.