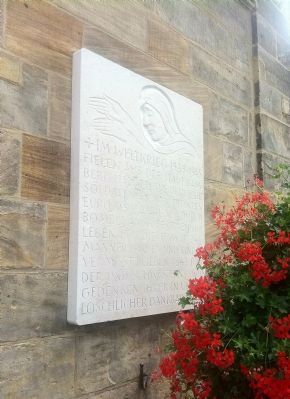 [Marker text translated into English, more or less:]
In World War II, 1939-1945, from the city of Bamberg fell 1,942 faithful German soldiers at the fronts of Europe and Africa. For the sake of their country the lives of 242 men, women, and children were lost to bombing. 1,642 of our brothers and sisters remain missing. We remember them with undying gratitude.

Topics. This memorial is listed in this topic list: War, World II. A significant historical year for this entry is 1992.

Other nearby markers. At least 8 other markers are within walking distance of this marker. Kaiserin Kunigund / Empress Kunigund (here, next to this marker); Joseph Heller 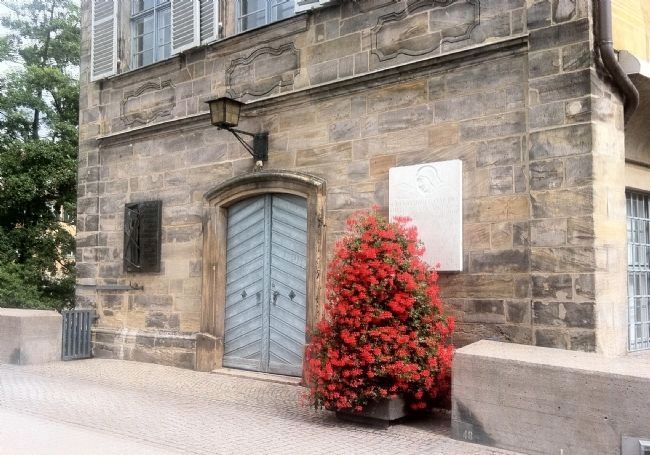 Photographed By Andrew Ruppenstein, July 13, 2012
2. Bamberg's World War II Fallen and Missing Marker - wide view
The marker is seen here to the right of the doorway on the north side of the old city hall (Altes Rathaus). The memorial plaque on the left side of the doorway memorializes the Jews and other victims of the Nazi regime.

More about this marker. The marker is mounted to the north side of the Altes Rathaus (Old City Hall), which is reachable only by foot by walking onto the Lower Bridge (Untere Bruecke).

Also see . . .  We remember the fallen German soldiers with undying gratitude - NOT. The marker is not without controversy. It has been repeatedly vandalized. In this opinion piece, a member of the Pirate Party explains his approval of the vandalism and why the marker would be better off in a museum rather than its current location. (In German.) (Submitted on July 25, 2012.) 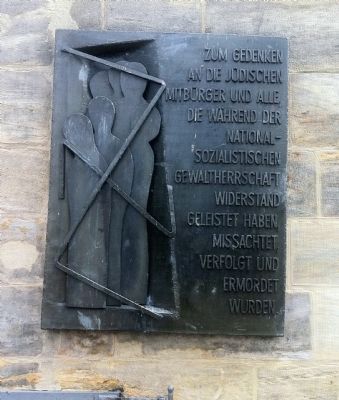 Photographed By Andrew Ruppenstein, July 13, 2012
3. Memorial plaque for victims of the Nazi regime
This plaque memorialize the Jewish citizens and all those who resisted, and who were violated, persecuted and murdered under Nazi tyranny. More than 600 Jews were deported from Bamberg and murdered during WW II. 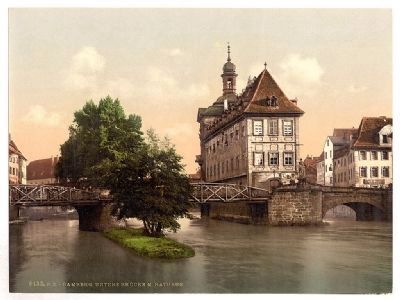 Photographed By Detroit Publishing Company, circa 1905
4. Lower Bridge and Rathaus - Bamberg
Although over a century old, this postcard view of the Lower Bridge (Untere Bruecke) and Rathaus (Old City Hall) provides a good contextual view of the marker location, showing where the historical marker and memorial plaque would later be installed.
Credits. This page was last revised on January 28, 2022. It was originally submitted on July 25, 2012, by Andrew Ruppenstein of Sacramento, California. This page has been viewed 932 times since then and 76 times this year. Photos:   1, 2, 3, 4. submitted on July 25, 2012, by Andrew Ruppenstein of Sacramento, California. • Bill Pfingsten was the editor who published this page.
Share this page.