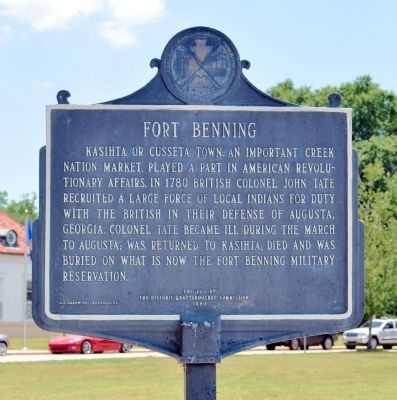 Kasihta or Cusseta Town, an important Creek Nation market, played a part in American Revolutionary affairs. In 1780 British Colonel John Tate recruited a large force of local Indians for duty with the British in their defense of Augusta, Georgia. Colonel Tate became ill during the march to Augusta; was returned to Kasihta; died, and was buried on what is now the Fort Benning Military Reservation.

Established following World War One, this post occupies former Indian lands sold during the Georgia Land Lottery of 1827. John Woolfolk consolidated small land holdings in 1843. Benjamin Hatcher acquired the property in 1883. Arthur Bussey purchased the plantation in 1907, selling it to the Federal Government in 1919. Fort Benning now occupies some 180,000 acres in Georgia and Alabama, most of which are in Chattahoochee County, Georgia.

Topics. This historical marker is listed in these topic lists: Forts and Castles 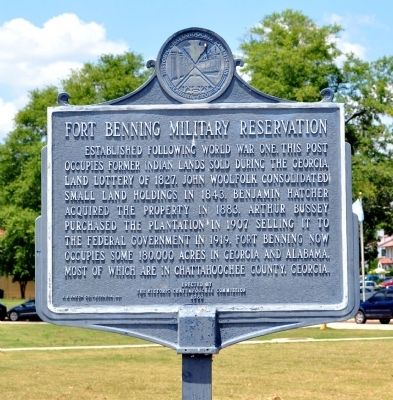 Click or scan to see
this page online
• Native Americans • War, US Revolutionary. A significant historical year for this entry is 1780.

Location. 32° 21.882′ N, 84° 57.365′ W. Marker is in Fort Benning, Georgia, in Chattahoochee County. Marker is on Richardson Circle, 0 miles south of Baltzell Avenue, on the right when traveling south. Touch for map. Marker is in this post office area: Fort Benning GA 31905, United States of America. Touch for directions.

More about this marker. The marker stands opposite Greene Hall on Richardson Circle 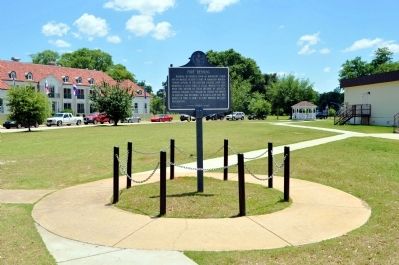 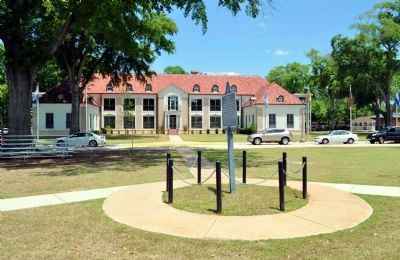 Photographed By David Seibert, June 19, 2012
4. Fort Benning Marker (Side 1)
Greene Hall is in the background. 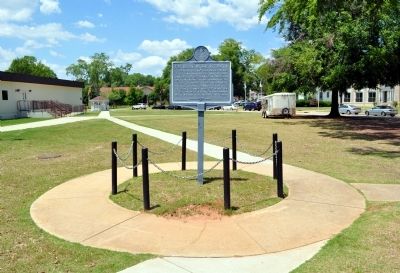 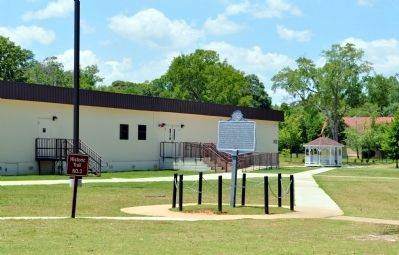