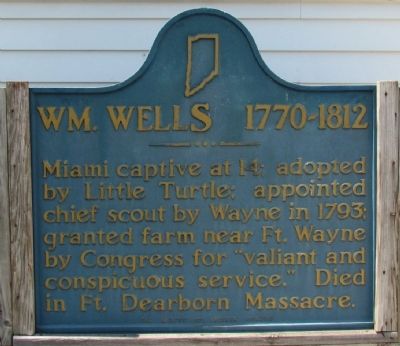 By Duane Hall, July 30, 2012
1. Wm. Wells 1770 - 1812 Marker
Inscription.
Wm. Wells 1770 - 1812. . Miami captive at 14; adopted by Little Turtle; appointed chief scout by Wayne in 1793; granted farm near Ft. Wayne by Congress for "valiant and conspicuous service." Died in Ft. Dearborn Massacre. . This historical marker was erected by The Society of Indiana Pioneers. It is in Columbia City in Whitley County Indiana

Miami captive at 14; adopted by Little Turtle; appointed chief scout by Wayne in 1793; granted farm near Ft. Wayne by Congress for "valiant and conspicuous service." Died in Ft. Dearborn Massacre.

Topics and series. This historical marker is listed in these topic lists: Native Americans • War of 1812 • Wars, US Indian. In addition, it is included in the Indiana Historical Bureau Markers series list.

Location. 41° 9.568′ N, 85° 29.34′ W. Marker is in Columbia City, Indiana, in Whitley County. The marker is located at the Whitley County Historical Museum which was the Columbia City home of Thomas Riley Marshall, Indiana Governor and 28th Vice President of the United States. The marker is found in the rear along the eastern wall of the house. Touch for map. Marker is at or near this postal address: 108 W Jefferson St, Columbia City IN 46725, United States of America. Touch for directions.

Other nearby markers. At least 8 other markers are within walking distance of this marker. Home of Thomas R. Marshall (a few steps from this marker); Thomas Riley Marshall 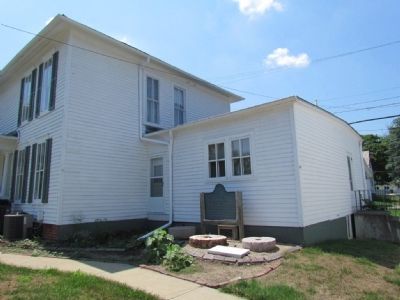 More about this marker. The marker does not appear to be in its original location. When I visited in August 2012, the museum staff did not know how or why the marker was located at the Thomas R. Marshall home.