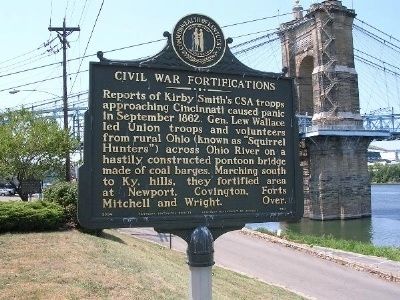 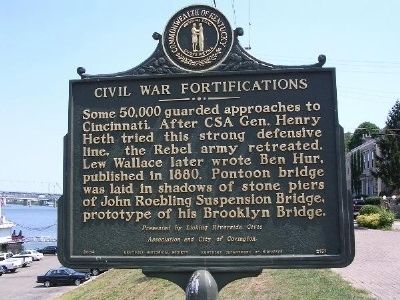 Click or scan to see
this page online
right when traveling west. The marker is located along the Ohio River to the east of the John A. Roebling Suspension Bridge (Highway 17) which can be seen in the background in the photograph of Side 1 of the marker. Parking is available along Riverside Drive and in an adjacent parking lot next to the river. Touch for map. Marker is in this post office area: Covington KY 41011, United States of America. Touch for directions.

Mural by Robert Dafford Murals of Lafayette, Louisiana, April 27, 2016
3. Bridge
Mural depicting the march south over the pontoon bridge, as noted by the marker. Note the bridge piers of the yet-to-be completed Roebling Suspension Bridge. This mural is located on west side of the bridge and is part of the set of Roebling Murals attached to a large retaining wall along the Covington Riverfront (i.e. a 2-minute walk from the marker).
Credits. This page was last revised on March 26, 2019. It was originally submitted on August 7, 2012. This page has been viewed 620 times since then and 20 times this year. Photos:   1, 2. submitted on August 7, 2012.   3. submitted on September 25, 2016. • Craig Swain was the editor who published this page.
Share this page.