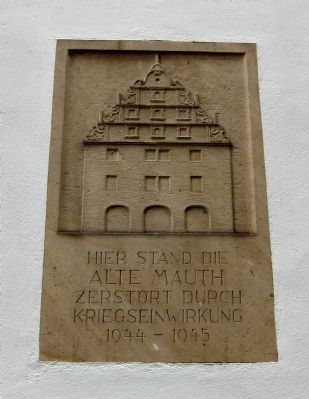 [Marker text translated into English:]
Here stood the Old Tollhouse. Destroyed by the effects of war, 1944-1945.

Topics. This historical marker is listed in these topic lists: Industry & Commerce • War, World II. A significant historical year for this entry is 1944. 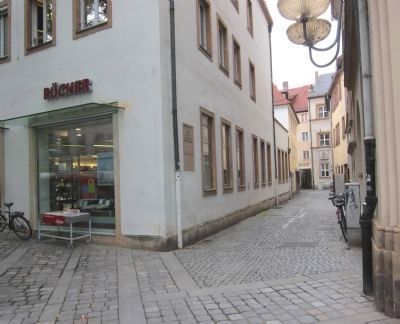 Photographed By Andrew Ruppenstein, July 13, 2012
2. The Old Tollhouse Marker - wide view
The marker is set in the side of the building on the north side of Mautgasse, and is visible here on the left side of the alleyway. The marker site is also visible in the postcard view below, as the same alleyway (albeit with different building on left) is visible behind the pushcart on the right side of the image.

More about this marker. The marker location is in the Gruener Market pedestrian zone, and hence only reachable by foot.

Also see . . .  Bamberg - Renaissance in Bamberg. Architectura Pro Homine's German-language article on Bamberg's Renaissance heritage. The section on the Alte Mauth is about 1/3 way down the page. Non-German speakers can still gain an appreciation for the city through the numerous photographs provided. (Submitted on August 14, 2012.) 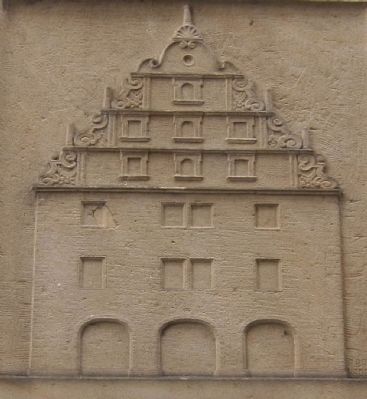 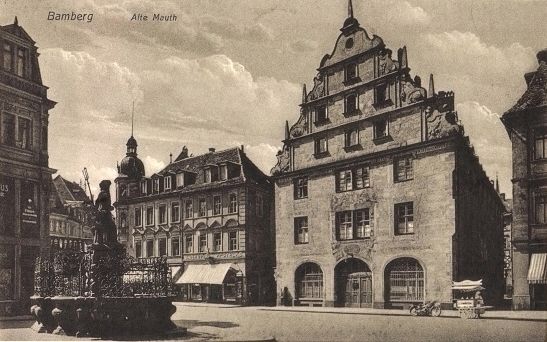 Photographed By Unknown, circa 1928
4. The Old Tollhouse / Alte Mauth - postcard view
Die Alte Mauth was originally built in 1361, with Gothic-style gables, as a market house/store/warehouse. The building was used as the city hall in the 16th and 17th Centuries. In 1625-26 the building was redone with Renaissance-style gables, and was then already known as the "Altes Rathaus", or old city hall. Served as a customs/toll office for the Bavarian State from 1810-1906. The building was renovated in 1905, with the ground floor converted to shops. Heavily damaged by a bomb on February 22, 1945. The building was razed to the ground during the final fighting of April 13, 1945.
Credits. This page was last revised on January 28, 2022. It was originally submitted on August 14, 2012, by Andrew Ruppenstein of Sacramento, California. This page has been viewed 574 times since then and 9 times this year. Photos:   1, 2, 3, 4. submitted on August 14, 2012, by Andrew Ruppenstein of Sacramento, California. • Bill Pfingsten was the editor who published this page.
Share this page.