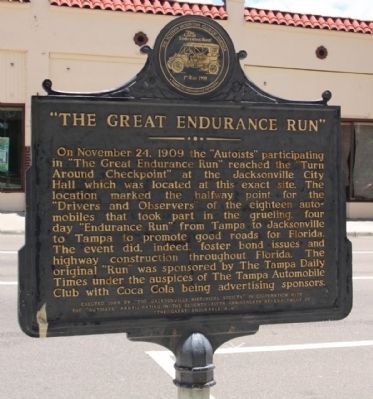 On November 24, 1909 the "Autoists" participating in "The Great Endurance Run" reached the "Turn Around Checkpoint" at the Jacksonville City Hall which was located at this exact site. The location marked the halfway point for the "Drivers and Observers" of the eighteen automobiles that took part in the grueling, four day "Endurance Run" from Tampa to Jacksonville to Tampa to promote good roads for Florida. The event did, indeed, foster bond issues and highway construction throughout Florida. The original "Run" was sponsored by the Tampa Daily Times under the auspices of The Tampa Automobile Club with Coca Cola being advertising sponsors.

Erected 1984 by The Jacksonville Historical Society in cooperation with The "Autoists" participing in the seventy-fifth anniversary re-enactment of "The Great Endurance Run".

Topics. This historical marker is listed in this topic list: Roads & Vehicles. A significant historical month for this entry is November 1991. 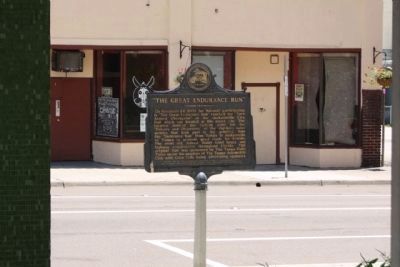 Click or scan to see
this page online
) near E Adams Street (State Road 228), on the left when traveling north. Touch for map. Marker is in this post office area: Jacksonville FL 32202, United States of America. Touch for directions.

Regarding "The Great Endurance Run". The first place award was “The Tampa Times Trophy” and five acres of land in “Zephyrhills Colony” in the up and coming Pasco County area. 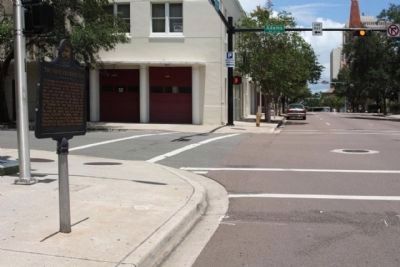