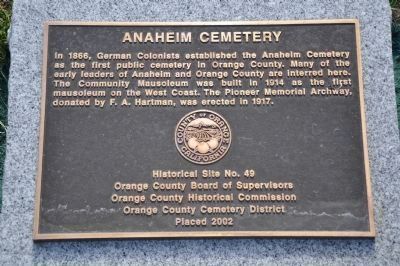 In 1866, German Colonists established the Anaheim Cemetery as the first public cemetery in Orange County. Many of the early leaders of Anaheim and Orange County are interred here. The Community Mausoleum was built in 1914 as the first mausoleum on the West Coast. The Pioneer Memorial Archway, donated by F.A. Hartman, was erected in 1917.

Topics. This historical marker is listed in these topic lists: Cemeteries & Burial Sites • Notable Places. A significant historical year for this entry is 1866.

Location. Marker has been reported missing. It was located near 33° 50.588′ N, 117° 53.997′ W. Marker was in Anaheim, California, in Orange County. Marker could be reached from East Sycamore Street. Touch for map. Marker was at or near this postal address: 1400 East Sycamore Street, Anaheim CA 92805, United States of America. Touch for directions. 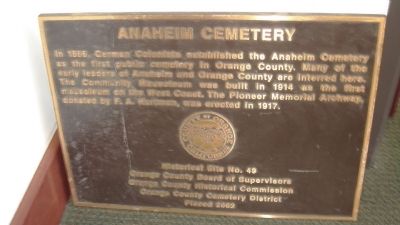 By Bill Stelrer, January 4, 2012
2. Anaheim Cemetery Marker
At the time this marker page was created the marker was in storage and was pending re-installation. 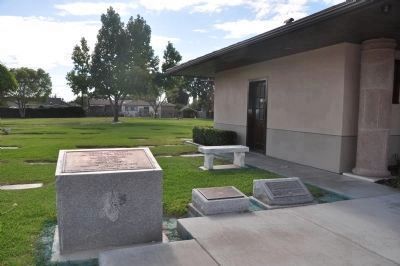 By Michael Kindig, August 28, 2012
3. Anaheim Cemetery Marker
This marker is now placed and is seen here between the two dedication plaques. 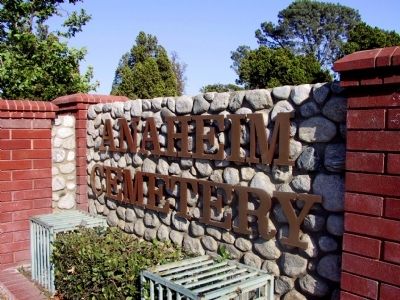